Newspapers are unable, seemingly, to discriminate between a bicycle accident and the collapse of civilization.

We may be the playthings of fate. We cannot breathe without taking life. As we talk here, we are ourselves the cause of the deaths of countless little lives. We have surely let old bodies go many times, as though changing from old clothes into new ones. We have died more times in the past than all the times we have fallen asleep since being born. . . . Await the time. What use is impatience?

When anyone seriously pursues an art — painting, poetry, sculpture, composing — over twenty or thirty years, the sustained discipline carries the artist down to the countryside of grief; and that descent, resisted so long, proves invigorating. . . . As I’ve gotten older, I find I am able to be nourished more by sorrow and to distinguish it from depression.

Don (Marquis) knew how lonely everybody is. “Always the struggle of the human soul is to break through the barriers of silence and distance into companionship. Friendship, lust, love, art, religion — we rush into them pleading, fighting, clamoring for the touch of spirit laid against our spirit.” Why else would you be reading this fragmentary page — you with the book in your lap? You’re not out to learn anything, certainly. You just want the healing action of some chance corroboration, the soporific of spirit laid against spirit. Even if you read only to crab about everything I say, your letter of complaint is a dead give-away: you are utterly lonely or you wouldn’t have taken the trouble to write it.

The greatest thing a human being ever does is to see something and tell what he sees in a plain way.

Anna was saying to herself: Why do I always have this awful need to make other people see things as I do? It’s childish, why should they? What it amounts to is that I’m scared of being alone in what I feel.

To some extent, each of us marries to make up for his own deficiencies. As a child, no one can stand alone against his family and the community, and in all but the most extreme instances, he is in no position to leave and to set up a life elsewhere. In order to survive as children, we have all had to exaggerate those aspects of ourselves that pleased those on whom we depended, and to disown those attitudes and behaviors that were unacceptable to them. As a result, to varying degrees, we have each grown into disproportionate configurations of what we could be as human beings. What we lack, we seek out and then struggle against in those whom we select as mates. We marry the other because he (or she) is different from us, and then we complain, “Why can’t he (she) be more like me?”

Sheldon Kopp, If You Meet the Buddha on the Road, Kill Him!

You can be up to your boobies in white satin, with gardenias in your hair and no sugar cane for miles, but you can still be working on a plantation.

We cannot cure the evils of politics with politics. . . . Fifty years ago if we had gone the way of Freud (to study and tackle hostility within ourselves) instead of Marx, we might be closer to peace than we are.

He begins to realize that the world was never outside himself, that it was his own dualistic attitude, the separation of “I” and “other,” that created the problem. He begins to understand that he himself is making the walls solid, that he is imprisoning himself through his ambition. And so he begins to realize that to be free of his prison he must give up his ambition to escape and accept the walls as they are. . . . The more we try to struggle, the more we will discover that walls really are solid. The more energy we put into struggle, by that much will we strengthen the walls, because the walls need our attention to solidify them.

I’d rather learn from one bird how to sing than to teach ten thousand stars how not to dance. 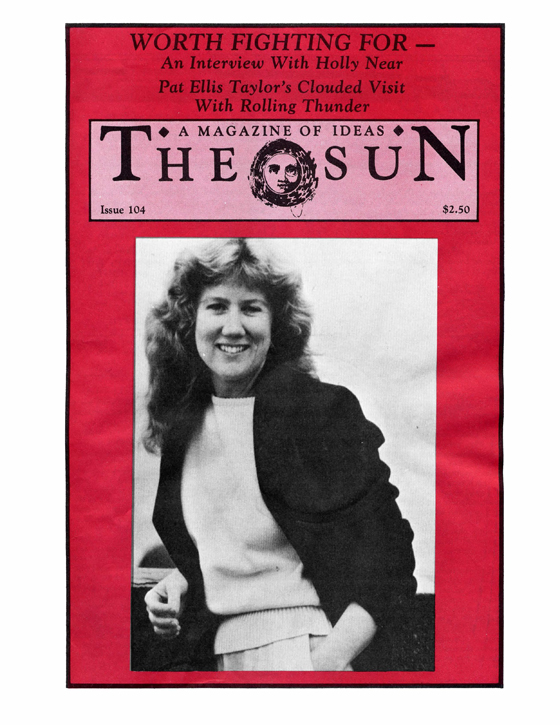 An Interview With Holly Near

A Clouded Visit With Rolling Thunder