A Zen monk and a Catholic priest were walking along a road. They came to a baby crying by the side of the road. The monk did nothing. The priest picked up the baby and held it in his arms. The baby stopped crying, and soon the mother came and took it from the priest.

The two continued on. They came to a young deer with a broken leg by the side of the road. The priest did nothing. The monk gathered the deer into his arms, and soon the deer’s mother came for its fawn.

The two continued on. They came to a wounded angel by the side of the road. The two men passed by in silence.

A few hours later they stopped to eat under a tree.

“Tell me,” asked the priest, “why didn’t you help the baby?”

“Because I knew you would help him,” said the monk. “And why didn’t you help the deer?”

“Because I knew you would help him,” the Father replied.

“And why didn’t you help the angel?” asked the monk.

“Because I knew God would help him,” answered the priest. “And why didn’t you?”

“Because I know there are no angels,” smiled the monk.

Meanwhile, two nonbelievers found the angel, took her home and nursed her back to health.

There was a wolf who decided to live like a human being. He left the woods, got a job as a computer programmer and rented an apartment. Soon he met a nice woman named Kate and they were married. They had two children, Nathaniel and Emily.

The wolf liked city life and he saved every cent he had to buy a Cadillac. Once he had his Cadillac, he spent his Sundays shining it and changing the oil. Sometimes Emily and Nathaniel helped.

The wolf had never liked the woods — they were too dirty — but sometimes he missed the silence. Every few weeks, he would walk into the woods and sit for a while.

Once in a while one of his fellow wolves would come to his house and they would stay up all night, laughing and howling.

When his children grew up, they denounced him. “Why did you ever leave the woods?” they demanded. “We are not humans and not wolves. Everyone laughs at your Cadillac and at us.”

The wolf didn’t know what to say.

His children went into the woods as soon as they were old enough. One of them, Emily, came back a few years later, lived again with her parents and got a job at a newspaper. She rose quickly and soon became a top reporter. She said she knew how to sniff out a story, and laughed.

But Nathaniel never came back.

Finally, she was married so many times that she could hardly move. She stood, legs bent slightly, arms out, looking like a brass statue. One more ring, and she could not breathe.

Then Angela started getting divorced. One by one, she divorced the people she’d married. Her knees and elbows became flexible. Her legs became free. Finally, she had just one ring. She was married to a fellow named Tom. They lived happily ever after.

One day, when Tom was 12, he noticed a crocodile following him. He ran home as fast as he could.

He told his mother, but she was not very impressed.

“Go out and play,” she told him, after he had finished his snack.

Tom looked out the door. The crocodile was still there. Taking a deep breath, Tom ran outside. He ran as fast as he could, downhill. The crocodile followed a short distance behind. Finally, Tom’s legs began to give out. Now I am doomed, he thought. He began to stagger. To his surprise, the crocodile slowed down too. When he had regained his breath, he ran again. The crocodile also ran. In this manner, Tom made it home.

The next morning Tom woke up and looked out the window. The animal was there. Tom ran to school with the crocodile close behind him. The crocodile waited outside the schoolhouse, and followed him home.

One day, when Tom was 55, he realized what a fool he’d been. All his life he’d been running from an animal that was actually his greatest friend. For the first time since he was 12, Tom sat down.

The crocodile ate him.

There was a goat who went to Heaven. He was a good goat — he had always been kind to other goats — and one day while he was standing on a hill eating grass he was suddenly transported to Heaven.

Back on earth, the goat met an old friend. His friend was an average goat, neither bad nor good.

Have you done anything unusual lately? asked the average goat.

As a matter of fact, I have, said the first goat. I went to Heaven. And he instructed the average goat how to get there.

A week later, he saw the average goat and he was resplendent.

Did you go to Heaven? asked the first goat.

Yes, the second goat almost shouted. It was the most wonderful thing I’ve ever seen.

I’m glad you liked it, said the first goat.

Later that day, he met a goat he knew who was a bad goat. He went out of his way to make other goats unhappy.

Hello, said the good goat. Would you like to go to Heaven? And he gave directions.

A week later he saw the bad goat, who looked even more unhappy than usual. Did you go to Heaven? asked the first goat.

Yes, but I wouldn’t call it Heaven, said the bad goat. It was the most miserable place I’ve ever been.

Later, it happened that the good goat was taken to Hell. There were mean people and animals, and the Devil was there — but mostly it was like earth. He said goodbye and left.

The cows taught the humans how to talk, how to sing, how to dance and how to do mathematics. Then, when the humans learned, the cows stopped talking, so they could be better servants. The humans became louder and louder and the cows became quieter and quieter.

The cows still feel that they made the right decision. 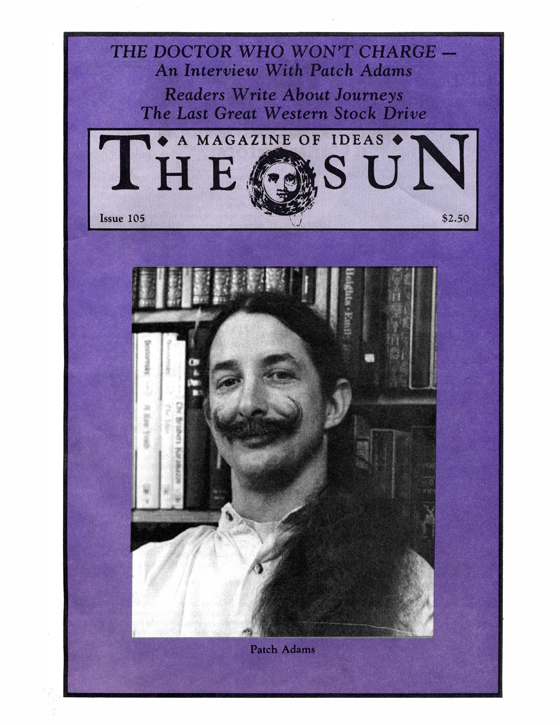 The Doctor Who Won’t Charge

An Interview With Patch Adams