Purchase the issue or subscribe to read this selection.

Sherwood Anderson was an author who related, through words, a feeling, a response to a situation, a release of his thoughts. He shows respect for man and woman, individually.

I read your statement as your own personal struggle with yourself. As adults, we are solely responsible for determining our own self worth and that of other individuals on Earth. You refer to being “taught to be small”; I see you as having accepted that teaching, having made the choice to believe you are small. Why we are so inclined to continually blame others for our own insecurities, is part of being human (not male or female). This is a struggle in itself; why complicate that struggle by transferring your anger at yourself (or teacher) on an unsuspecting author? I get the impression you feel the world views women as subhumans. I’ve never felt this feeling except by my own immature choice. Another example of being human.

One of the joys of literature is freedom of personal expression (which your editor allowed you with respect to your feelings). Allow me the same freedom to choose my own opinions and feelings by deciding what I will about an author’s words. It would disturb me if THE SUN refrained from printing any literature due to possible, probable, or obvious sexism, or any “ism.” Being exposed to all creative thoughts expressed is how we learn. This is how we come to decide who we are, our likes and dislikes, and our decisions about how we wish to live our lives. Freedom of choice is our God-given responsibility and a wonderful gift as well. Accept the gift and use it, it will make you very strong.

P.S. My mother is a well-respected scientist, celebrating her fifty-fourth year of life. I guess no one told her she couldn’t be a scientist.

This is the chronology that finally brought me to responding to THE SUN. I pulled the mail out of what seemed to be a too small Box 461 — lots of catalogs missing their target audience, one letter from a close friend (ya-hoo), an irritatingly humorous card that bespeaks twice a week of “lowering the boom on advertising” by advertising by mail, and THE SUN (ya-hoo).

As I walked out of the post office, I first opened THE SUN [Issue 107], skimmed the sunbeams page, got in the car, drove home, looked again at the sunbeams page, looked at the title of the Editor’s Note, flipped the page to correspondence and “To The Assistant Editor” caught my eye. I skimmed the two letters directed to Carol Logie [correspondence from Rebecah Newton and P. Ingle] and found myself becoming more mystified — “What Sherwood Anderson article?” So in my mind I tried to locate the whereabouts of Issue 106. It eluded me. I knew it was last month — height of canning, patching the roof — busy season and not enough time taken to read.

In that whirling-dervish of thoughts about things accomplished during the Summer and the enormous amount to accomplish before snow draws the seasonal curtain, it came to me. Issue 106 is in the back of the Opel! I kept it there for reading while waiting, grasping at snatches of busy season time to read. Numerous times I find myself sitting in the car waiting.

I sat back down in the front seat of the Opel, THE SUN in my hands, the car door open, the late afternoon cobwebby light settling into the dark frame garage. I read Sherwood Anderson’s story, then I read Carol’s “What’s Missing” [at the end of Sherwood Anderson’s article], then back to re-reading the correspondence letters.

I wholeheartedly agree with Rebecah Newton on freedom of personal expression and freedom from editorial censorship and I feel undoubtedly that Carol does too. I found no trace or words or thoughts to the contrary in her “What’s Missing” note following Mr. Anderson’s story.

I wholeheartedly disagree with the question (and over-used cliche) “Where’s the Beef,” Carol? My answer to Rebecah is the beef is with inequality, which I found shining like a red neon BAR sign glowing on a Winter’s night throughout Sherwood Anderson’s story.

Discrimination is often so subtle that it takes a knowledgeable eye and a sincere heart to recognize it and to recognize that it is ever present and sinisterly slipping on by again. Carol recognized it. To have the courage to make that recognition known is truly consequential — not petty.

I get the impression that blacks too get the impression that the world views them as subhumans, yet I’m sure they all don’t feel that way. How does the majority of a group of people who are continually discriminated against feel when they continually take a back seat in the media in this society? Or if they do show up in a front seat they’re either a chauffeur or undressed? Regardless of how secure one is with oneself, how solely responsible one is in determining one’s self worth, how much integrity one has, discrimination is real and is alive and well and will remain so, unless more “insecure” sensitive people like Carol Logie simply state their views about the subtleties that exist — giving warning signs.

Symbols are strong. Language as a symbol is strong. Sherwood Anderson’s symbols are strong, and regardless of the insight of the article, let’s face it, the stereotypes are there. William Irwin Thompson writes in The Time Falling Bodies Take to Light, “For years feminist scholars have objected to the use of man and I as much as anyone bristled with annoyance at the ideological cant, their zealotry, and their insistence on the use of the ugly and abstract word ‘person’; but it is clear, they are right. Naming does direct thought.” (My emphasis.) Stereotypes direct thought.

I do not feel that Carol has prevented anyone from the freedom to choose his or her own opinions about the author’s words; she has simply and straightforwardly opened up a cobwebby, small-paned window and let that clear afternoon light into the darkened garage of discrimination and inequality.

P.S. As far as inequality in the media, I find the blatant sexism of a boobs and butts show like the television program Charlie’s Angels less alarming than the subtle stereotyping of Mr. Anderson’s article nestling itself in the light of THE SUN.

Instead of expressing annoyance at the roles assigned in “When We Care,” perhaps you can ignore it long enough to understand what it is that Sherwood Anderson is really saying. And then, turning anger into creativity, make a positive change by writing, expressing, the same beautiful thoughts in a non-sexist manner.

Do it, Carol. You know you can.

P. Ingle Naples, New York
More Letters
Thinking About Writing Us a Letter? Give in to the temptation. We love getting mail. Write us a letter! 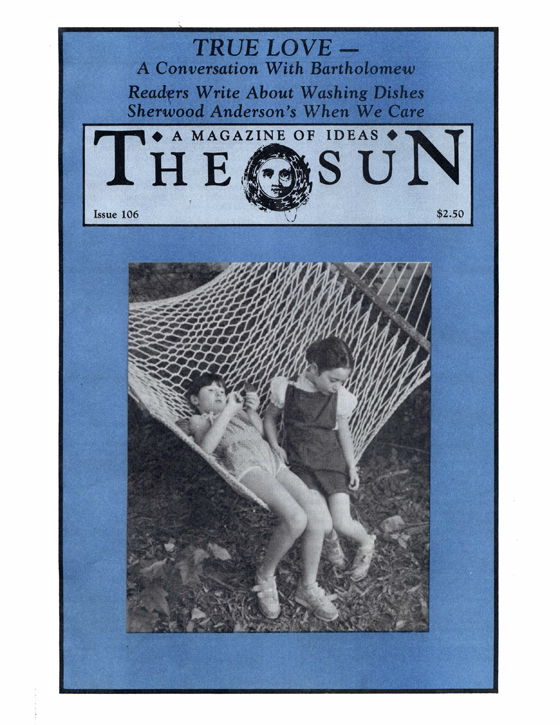 A Conversation With Bartholomew