The television is on in John’s office across the hall. The sound is indistinct, like the droning of insects in summer, but from the rise and fall of voices, the endless droning of confident voices, I can tell speeches are being made, some great issue is being weighed, so I walk over to listen.

It’s the House of Representatives debate, live, on military aid to the contras. The press has been reporting for days that the bill has no chance of being passed. Yet despite the virtually certain outcome and the ponderously familiar arguments, I stand there, watching. I’m even moved as House Speaker Tip O’Neill dramatically urges his colleagues to lay aside politics and vote their conscience, though I know Tip O’Neill could no sooner lay aside politics than I could stop breathing. But, for the moment, that doesn’t matter. Standing there, absorbed in the debate, I want to feel moved, to feel aroused and indignant, to be lifted by a stirring speech and — when the votes are counted — to know my side has won.

Of course, I might feel the same way watching a baseball game, if I still watched baseball. Baseball and politics were the spectator sports of my youth, and before I was even old enough to understand the difference between them, I knew that the World Series and the national party conventions were events of the highest order, since even meals might be postponed while they were on. I knew too — since the Safranskys valued eating almost as much as winning an argument, being “right” — that the important thing was who came out on top, that no amount of drama or sportsmanship really made up for a loss, for loss was painful, in the World Series or in a family fight.

For a while, I followed baseball, as I followed politics, by my father’s side — where, at the age of twelve or thirteen, I’d happily lose myself, on a Sunday afternoon, in the curl of his cigar smoke and the television’s glow, with a big pitcher of iced tea beside us, and a pile of newspapers, and something to eat. For my father rarely did just one thing at a time; if he was watching a game he was also reading, and talking, and eating — and, amazingly, keeping track of it all, always aware of the score and who was up and what the count was, even as he nodded agreement with the liberal Post and heaped scorn on the conservative News, and broke me up with a joke, and poured himself another glass of tea. In the kitchen, my mother and grandmother would be preparing dinner, though the aromas would never quite penetrate the smell of his dark cigars, just as the announcer’s excited voice, the crack of the bat and the roar of the crowd, would never quite drown out our conversation. Mostly he talked and I listened — to his jokes, his recollections, his emphatic opinions on everything you could name — but I was happy to listen, even when I’d heard it all before. For a while, I wished for those afternoons to last forever, for life always to be this happy and simple, filled with my father’s reminiscences and with the contests of the great.

My father valued that time with me, too — more than I knew. For as I yearned, increasingly, to be outside with my friends, playing ball instead of watching others play, I was amazed at the resistance he put up, making me feel guilty, as if I were deserting him. Couldn’t he understand I wanted to make my own memorable plays, even if they were memorable only to me? Didn’t he remember what it was like to hit the ball so hard that you felt for that moment as strong and rooted as a tree? He’d played ball before age and disappointment caught up with him, and he put on more and more weight, and started spending nearly all his time, when he wasn’t working, in front of the TV.

I wondered if he was envious of me, or more lonely than he’d admit, but I was too cowed to say anything; I just sullenly grabbed my glove and tried to avoid his stare as I pushed open the screen door and hurried down the street. We went through something similar years later, when I fell in love, and wanted to be with my girlfriend on weekends instead of with him. Both times he lost — I got to play unmemorable ball, and when I finished college I married the girl and moved away — but that’s not to say I won. I’d begun to realize nobody wins contests like these.

After all these years, I still don’t watch sports on television. Nor do I follow politics the way I once did, spending an hour and a half with The New York Times each morning, then reading one of a dozen or so political journals for opinions no less emphatic or long-winded than my Dad’s. For some people, reading the paper religiously or watching every big game is informative or exciting or maybe just a ritual that helps them relax. There’s nothing wrong with this, though the tendency is to confuse the symbols with the reality they represent. For example, we think of ourselves as a sports-minded nation. But do so many millions gather in front of the television because of their love of sports — or because of their boredom, and their wish to vicariously experience a test of will, and their yearning for physical grace? Similarly, when people tune in the six o’clock news, is it the news of other human minds and human hearts they get, some truth about themselves, or a collection of disconnected facts that never add up? You can know a lot about something and still know nothing. What’s even worse is that journalists believe, and therefore teach, that our experience is thrust upon us, when the truth is that our fate, individually and collectively, is something we create.

We’re reminded daily of the abuses of power — scandal, revolution, injustice of every kind — but is it power that corrupts us, or the denial of our power? Science tells us the world is an accident; religion tells us we’re sinful from birth. No wonder we have no sense of our inherent dignity and spaciousness, and wander in a dream of powerlessness, fighting to protect our turf. Are governments different from individuals? Is there one of us who isn’t enslaved to his ego — Ortega, with his $300 designer glasses; Reagan, who seems to think he’s President of the Earth? And how about you and me? How about the victims our hearts go out to — who as soon as they get enough power, find victims of their own?

I was a political science major in college. I studied the great thinkers, and pondered the nature of justice, and questioned which form of government was best. I still think about these things, but they can seem irrelevant when viewed through the dark lens of current events. The world is smoky; who’s to say it won’t end in ash? Yet each time we blame someone, or see their loss as our gain, surely we’re pouring oil on the flames. How can we not be oppressors if we won’t recognize that we’re all victimized by the same illusions, which are the real source of injustice and pain?

We’re never satisfied for long; either we don’t have what we want, or we get it and then want something else. Nations are the same. How much like romances revolutions can seem — thrilling at the outset, full of promise and praise, until the bells stop ringing, the echoes fade, and we realize our lover is all-too-human . . . or that it’s the revolution from which we need to be saved.

I’m not suggesting there aren’t differences between left and right or that all governments are the same. I have many of the same opinions my father did: I’ll vote the lesser of the evils; I’ll play by the rules and be thankful for gradual change. But I want the rules to change. I want us to remember that the world is nothing more or less than how we live each day. Can we govern ourselves? Can we spend a half-hour looking in the mirror instead of at Dan Rather’s face? How much more interesting we might find our own lies — the deals we cut for a little love, the votes our smiles buy, the pain we lock up deep inside and officially deny.

We scoff at Reagan for being an actor, as if we all didn’t pretend. The President’s lines are pretty bad, but so are some of mine, and so are some of my friends’. Agreed: the United States has no more right to overthrow the Sandinistas than I, unhappy with my neighbor’s music, have the right to break into his house and smash his records on his head. Agreed: no aid to the contras, for guns or anything else. But I still don’t like the music from Nicaragua, and I won’t get up and dance: opposition parties intimidated; civil liberties suppressed. One apologist writes that there are fewer human right violations in Nicaragua than in Honduras, that cases of torture are “isolated” there. I’m unimpressed.

Shall I blame the Sandinistas, though, for being human, for forgetting that the means are as important as the ends? Shall I blame Reagan, for being at war with himself, and thus believing that peace is something he needs to defend?

Television is on fifty hours a week in the average American home. Not only are baseball and politics spectator sports; life is. Our need to lose ourselves is as great as our inner emptiness. At the end of a long day, I too want to be distracted; I might feel lonely, but instead of admitting it, I’ll use television or a magazine to escape. Even my work, which I love, becomes an escape sometimes, if I use it to deny my pain. I’ve used everything that way: lovers, politics. . . . Yet the choice, whether or not I’ve acknowledged it, has always been clear: to understand the loneliness and go beyond it, or always to be outside myself, looking in. 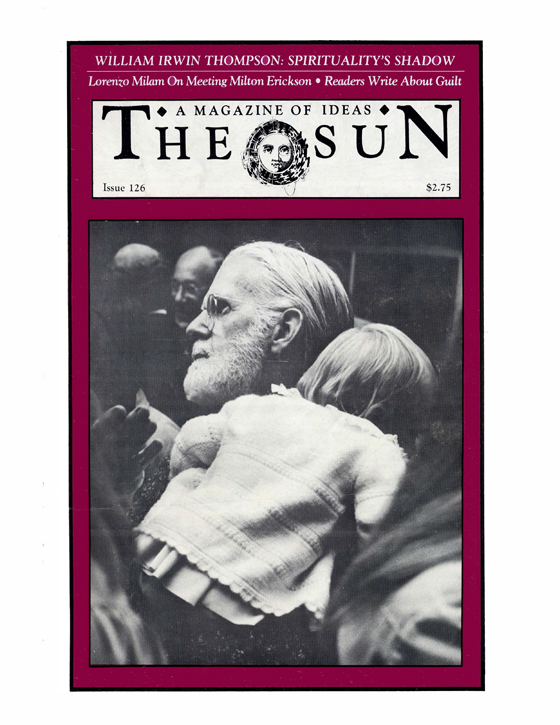