Progress brought people like Leon Johnson to apply for jobs in the boat-building company where I worked. He came from Louisiana, where he had been a farmer all his life. But something went wrong, and he could no longer make a living in the country. He and his wife sold their farm and moved to Florida.

His wife’s parents lived there, and he soon found some cheap land where he could plant his trailer and let his dogs run free. At his in-laws’ house, the dogs had been chained up, he told me, because there was no yard. They were good dogs, he said, all strays that nobody else wanted. There were ten of them.

When I interviewed him for the job, his hands were dirty, the fingernails black and greasy. He was young and strong and simple. His hearing had never been assaulted by whirring, grinding, roaring, and shouting. He had never been dizzy with paint and fiberglass fumes. But he wanted a job and he got one, building power boats for rich people in Florida, the sunshine state.

I remember the 1950s. My family would watch “College Bowl” every Saturday on television and cheer for the students competing to be first with the right answer. The General Electric commercials for light bulbs, hairdryers, and toaster ovens interrupted frequently. They began and ended with the slogan, “Progress is our most important product.”

In those days, progress meant plugging in a new appliance and letting electricity do the work that had been done before by wind or fire or muscle-power. Progress meant answering a question, solving a problem, getting somewhere, improving — moving along the line from Point A to a better Point B.

When I think of progress in this way, I reduce my world to a series of lines with opposing endpoints. Then I compare and judge the differences between old and new, lose and win, yours and mine. I can find no resting place along this path toward “more” and “better” — only restlessness, ambition, greed.

Not too long ago I was walking in the woods and I spotted a freshly cut log. As I looked at the tree trunk in cross-section, I saw the pattern of its “progress.” I saw the heartwood — the germ of life at the center — surrounded by concentric circles of substance. Where the external (foreign worlds of wind, rain, insects) had been in one year, in the next was the tree’s own woody tissue, bearing weight and transporting mineral water from root to leaf, the bark lying farther beyond.

In a tree’s terms, progress is marked both by linear increase in height and by circular expansion. In blending the upward and outward pressures for growth, the tree makes a spiral motion, leafing out to receive the most light it can possibly absorb.

Trees teach me to give a circular, spiral shape to progress. Then progress becomes a process of encompassing what before seemed foreign, of seeing “otherness” as a supporting and nourishing part of my world.

The challenge is to encounter difficult relationships and frustrating situations in such a way that I receive each experience as a benefit, a chance to learn. To do so, I must restructure my perception and my response to what seems external, like a tree building wood, bringing the outside in.

I like being a tree. Like the heartwood at the center of expanding annular rings, even as I embrace more and more of life, essentially I am at rest. The center remains the same, and there is nowhere to go. Yet the thrust of life continues into another dimension; I reach upward to receive, and shine out again, the light.

My wife and I are going to get a car today — reasonably new and Japanese, so there is some chance of reliability. The bank, of course, will hold a loan over our heads. That’s progress, I suppose.

Olivia, our daughter, is seven months old. She knows her name if I judge by her turning around when I call her. “Olivia,” I say, or “Iggy-iggy,” which for some reason she finds funny, and she turns her head, gums the air, and shows off a couple of lower teeth that make her look like a beaver manqué. No-problem progress.

The landlord of the two-family house we live in agreed Sunday that I could use one of the third-floor rooms in return for mowing the lawn. I didn’t tell him that I wanted to use the room for getting together with others who might like to practice Zen. Up-country from here, some Vietnam vets burned down a small Zen temple. They remembered Buddhists from another time and place. They were sorry later. But I don’t want my landlord to worry. It’ll be a small gathering, since the room is small. I found a seamstress to make cushions for six dollars (minus the kapok stuffing, which is hard to find), so I guess things are progressing.

Elizabeth, my wife, is meeting the other mothers up and down our tree-lined street. She spent the winter as isolated as a troglodyte, watching Olivia. Nice people, in our neighborhood; lots of kids. It’s progress.

Sometimes I wonder how there could be lack or surfeit of progress, or any progress at all — but that’s my problem, my progress.

I’m not all that interested in results. The process is what holds my interest.

A past dream might explain. In this dream, I’m laying a road with my brother Peter and another man. The dirt is as black as asphalt, and moist. The sun bears down on our backs, baking us but not beating us down. In fact, we are laughing a lot while we work. The road is wide and apparently without end, heading over hill after rolling hill. My response to the endlessness of the work is peace, joy. Instead of experiencing it as dreadful drudgery, hateful and unavoidable, I find the physical labor pleasant. I enjoy sweating and laughing, getting a darker tan. Most of all, I love being in rhythm with Peter and our compatriot worker.

In the dream I’m under the spell of progress.

I used to think my life would progress steadily, as I learned more about living and solving various problems. I expected that when problems went away, they would be gone for good. That has not been the case; some things have come back over and over again. Every phase has been difficult, each in its own way. What does change are the ways I can deal with apparent setbacks. Instead of losing hope — “If this is still happening, it proves that my life will never be what I want it to be” — I can say, “I’ve dealt with this before; this is familiar stumbling. I don’t like it, but I know it and can handle it.”

When I was a small child, I believed grown-ups didn’t feel pain as strongly as children did; it seemed as self-evident as the fact that things fall down rather than up. When I was four, I was waiting at the doctor’s office to get a shot. I said to my mother, “I can’t wait till I grow up.” “Why?” she said. “Because then things won’t hurt as much.” Surprised, she told me that that wasn’t true at all, that things hurt just as much no matter how big or how old you were. She said it with such simplicity, without any hint that she was trying to get me to follow a rehearsed idea, that I believed her completely and immediately. I was disappointed to think that I would still be vulnerable to pain when I grew up. I was impressed, too, because it seemed to me that adults got shots, withstood bumps and bruises, and took bad-tasting medicine — all of which I thought intolerable — with such ease, as a matter of course, and with no visible suffering. But maybe I wasn’t altogether wrong; for example, I could see that large, thick-skinned animals were not bothered by things that would devastate smaller creatures. In fact, most adults are disturbed very little by things that devastated them as children. There does seem to be a way of growing larger than pains, psychologically as well as physically. It seems to have something to do with including more, growing to encompass more of the landscape rather than climbing the mountain.

There is no progress, these days — although we’re riding uptown to our therapist, which could be construed as progress; later we’ll come back downtown and have a fight — is that regress? Ah, we fight after therapy, weekly. We worry that we’re not making progress. That we won’t have children to carry on our names, Sparrow and Violet Snow.

“Does this train Stop at 59th and 5th?” this guy above us just asked, and the people around us — the man reading Tales Of A Long Night, and another reading The Telos newsletter — admitted they didn’t know. It’s 1988 and still no one knows where the N train goes.

“Right next door to the Copacabana,” the first man says.

“He’s a spy,” Violet says. How can there be progress when we don’t trust our brothers because they wear dark glasses?

What do we want from progress? Hope? But hope comes mostly out of disaster. 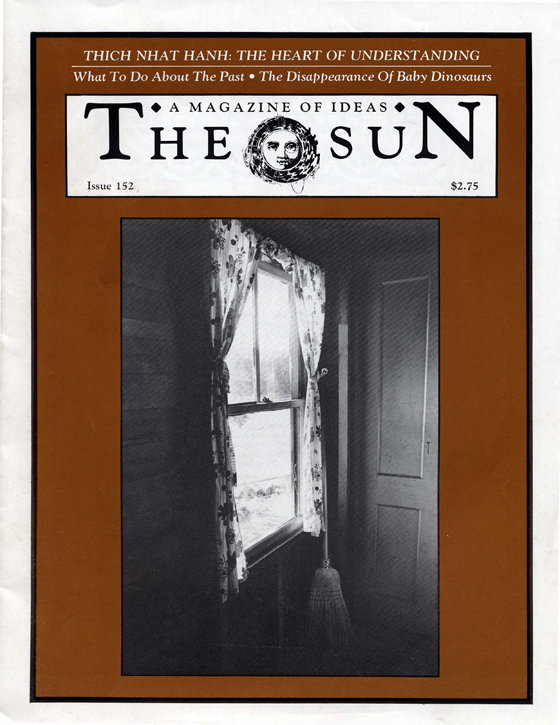