“There is no place to go, and so we travel! You and I, and what for, just to imagine that we could go somewhere else. . . .”

Studying astronomy, as a child, I was fascinated by the Earth’s movement, its rotation on its axis, its orbit around the sun, its sweep, with the rest of the galaxy, through space. Despite the evidence of my senses, nothing stood still. When I learned, later, that everything was made up of atoms in motion, reality became even more suspect. The world of solid objects, science told me, was an illusion; the tissue of creation was appearance, nothing but show.

But it is a seductive fiction. We live in a world of things, collecting and shuffling them for advantage, giving them up for different advantage. Even experience is shaped into something discrete, a possession, like those trinkets on charm bracelets celebrating memorable events — “college” or “Europe.”

Travel has become a thing, too. A commodity, wrapped and sold in packages. Fifteen years ago, sociologist Daniel Boorstin lamented the decline of the traveler and the rise of the tourist — the one active, and strenuously in search of people, adventure, and experience; the other passive and a pleasure-seeker, who expects interesting things to happen to him. “The multiplication, improvement, and cheapening of travel facilities,” Boorstin wrote, “have carried many more people to distant places. But the experience of going there, the experience of being there, and what is brought back from there are all very different. The experience has become diluted, contrived, prefabricated.”

Not only that. Nowadays we travel not so much through space as through time, measuring distances in hours rather than miles: if it’s Tuesday, this must be. . . . One consequence is that to the jet traveler, high above the clouds, too high even to see the waters, the experience of crossing the ocean is robbed of the experience of having crossed it. Compare touching down at Kennedy with this description, by William Bradford, of the arrival of the Mayflower in 1620:

They fell upon their knees and blessed the God of heaven, who had brought them over the vast and furious ocean, and delivered them from all the periles and miseries thereof, again to set their feete on the firme and stable earth, their proper elemente.

There are few who would trade the convenience and swiftness of jet transport for a bunk on the Mayflower. But there are many who would exchange the empty and insulated air of modern travel for the sensation of “having arrived.” Our “proper elemente” has been swaddled like a mummy with concrete ribbon — but to preserve what? The husk of a planet whose measure has been taken, whose countenance has been turned into a familiar face, photographed and sealed in plastic? America, once the promise of all that had gone dry in Europe — a frontier broad and mysterious and rudely free, a future uncramped by tradition, and ripe therefore with new space and new time — has itself shrivelled. Speed of travel is our frontier and sameness is the cramp. Space and time having been conquered, we can go anywhere, at any hour, in any comfort. But there is no place to go. We have means of communication that bring the world into our homes, Swiss novelist Max Frisch observes, and “to travel from one place to another is atavistic . . . the day will come when there will be no more traffic at all and only newlyweds will travel.” Travel, as tourism, becomes the ultimate spectator sport. The television screen and the car window are interchangeable; both afford a guided tour of our own haunted imagination — but nothing too dangerous! We bypass the dark and tortured cities, turn the wilderness into parks, save ourselves from boredom with “attractions.” All that counts is to keep moving. Away from cities; back to the cities; to Europe by jet; overland to India; to town for dinner; back and forth to the kitchen: we are drunk on the sensation of movement, and call ourselves travelers as carelessly as an alcoholic describing himself as a social drinker.

We return, finally, to the geography that matters most, one brave step away, into ourselves. All the sweets and ice of the road are there, and the swagger and the music of the foreign, and home. 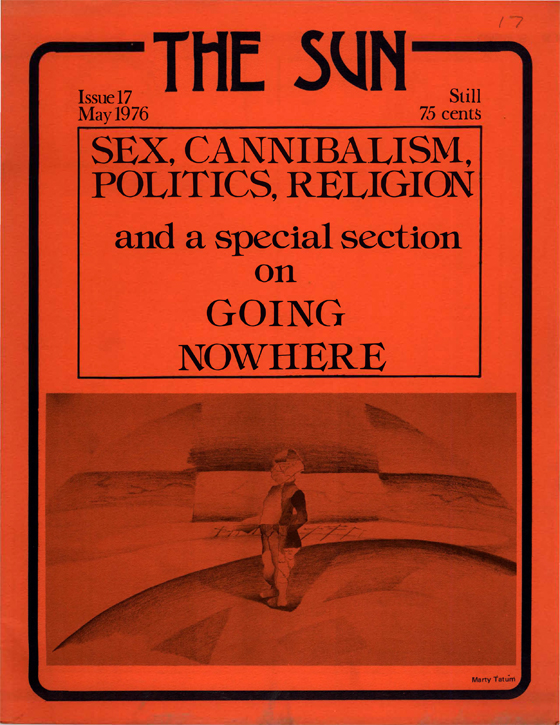 Eat Your Heart Out

A Short History Of Part Of North Carolina

With Some Names Changed To Protect The Innocent, The Guilty, & The Dead