For Christmas, he asks for the Game Genie. It promises to unlock the power of his favorite video games, give him more speed, more weapons. With the Game Genie, every time a fire-breathing dragon kills you, you get another life. Not bad. Religions have been founded on less.

Video games are more complex than most adults realize. The appeal isn’t just flashing lights and laser blasts and cartoon heroes chasing one another through surreal landscapes. There are nuances that become apparent only after you get beyond the beginner’s stage: trapdoors, hidden passageways, intricate labyrinths that lead to whole other worlds. Mastering a game is like deciphering an ancient alchemical text, its mysteries concealed behind symbols and allusions.

With twenty million Nintendo sets in America and a Nintendo hotline that dispenses advice to ten thousand callers a day, there’s no question the games are addictive. Our rule: no more than an hour of play a day. Yes, even if it’s raining.

Look at him: a thin film of perspiration on his smooth upper lip, fingers dancing on the hand-held controller, heart racing, slender body surging with adrenalin. No wonder most players are boys between eight and fifteen, who lose interest about the same time they discover darker thrills — and the game they never quite figure out, whose rules grown men haven’t fathomed.

But at fourteen, he’s still more entranced by the flash of exploding enemy ships than the shine of a young girl’s hair. For Christmas, I suggest we bend the rules. If I’d been given a gadget that promised to defeat the subversive tendencies of my aging body, or make my run-down Toyota drive like a new Porsche, I wouldn’t want to play for just an hour.

Alas, the Game Genie makes things too easy. He rescues the princess. He defeats the evil Wart. He discovers the lost pieces of the golden Triforce of Wisdom. He wins until winning becomes predictable and, finally, boring. All along, it turns out, winning wasn’t as important as the implacable odds against him: one boy against the universe. Now that winning is inevitable, there’s no chance to be a hero, no epic dimension. Imagine David battling Goliath with an Uzi instead of a slingshot. By the end of the week, the Game Genie sits ignored.

Yet when he visits a month later he can’t wait to play. What happened? Nothing, he insists, reaching for a game cartridge. N. and I look at each other as the screen lights up. He touches his sword to a secret panel. The screen shimmers. His brown eyes widen as he warps to another dimension.

Maybe we were mistaken. Or maybe he decided that mock heroics were better than no heroics.

I’m reminded of Pentagon officials who, rather than cut the defense budget, dream up new scenarios for conflict. So what if the Soviet Union has collapsed? We still need to be prepared for Russia marching into Western Europe. For Iraq invading Saudi Arabia. For narco-terrorists staging a coup in Panama. For U.S. hostages in the Philippines. For North Korea pushing south.

This is what defense planners do when they have a Game Genie like George Bush. This is what happens when history is a game called forgetting. This is America, running her fingers through our hair, whispering something about the future, trying to make us forget that what Jeffrey Dahmer did to his victims, the U.S. did to Iraq, the intention just as confused and, in the mind of the oppressor, sexy: love of country, love of flesh.

I think about the games I play. Marriage is a game: at a party the other night, I watched my wife’s eyes when she talked to another man; I worried I’d lost the princess. Being a parent is a game: pretending my kids are more important than anyone else’s; that the poor, the crippled, live in a different world, the one that begins outside my door. We say unemployment is no game, but play capitalism with its iron rules: selling and buying things we know will break, things that break the planet. No one has to go hungry. No one has to be homeless, counting up their losses every night. Gandhi suggested a different game. Over his tomb is this message: think of the poorest person you have ever seen and ask if your next act will be of any use to him or her.

Yet even the oppressed oppress one another — hoarding just a little, worrying more about their kids than those next door. The illusion of separateness is a game played by rich and poor alike: the game that I’m in here, you’re in there; that these bodies are separate nations. We’re all patriots. We wave the flag of our individuality, look for an ally or two. But we know the world isn’t safe. We have to protect our borders.

We are these bodies: the biggest game in town. How unarguable the rules seem, written in flesh and blood. What storytellers we are, holding ourselves spellbound. I mean, we know how it will end. We’ll grow a little older, perhaps a little kinder, a little wiser. Then we’ll die. Yet we can’t look away. We follow the plot in the newspaper, in the mirror, in the glance of a loved one.

Now and then, I imagine a different game, in which we’re joined to each other, connected as if by lines of invisible ink. I imagine our thoughts connect us. Our feelings. Our dreams. I don’t ignore the evidence that this is a senseless world, headed for destruction; that we’re physical creatures, whose consciousness ends at the boundary of our skin. I imagine all the evidence isn’t in. 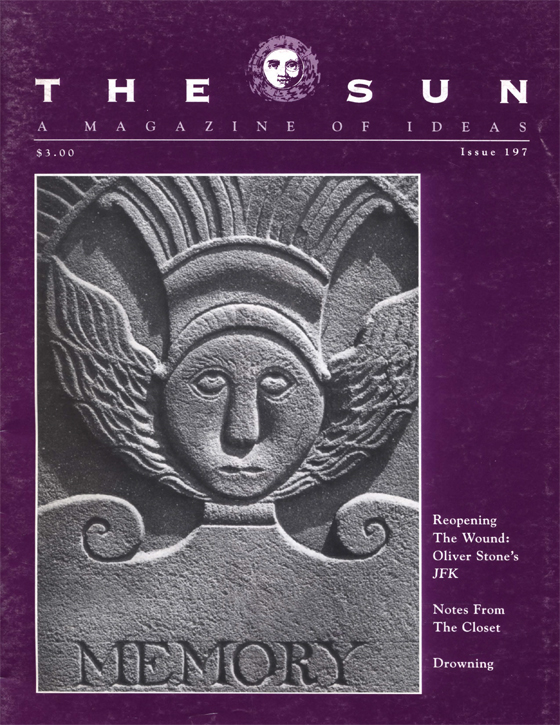 The Value Of Trees