My father and I lay on our backs in a puddle of antifreeze. It was January and extremely cold, even in the garage. The only light came from a small bulb hanging by an extension cord from the ceiling.

Every Saturday that winter we were out in that damp, icy garage working on my car. Shivering on the floor, I listened distractedly as my father explained what he was doing. I kept asking myself over and over, Why me? All of my friends owned newer cars that rarely broke down. If one ever did, their parents would pay a mechanic to fix it.

I remember how in third grade I sat next to my teacher Mrs. King, trying to spell chicken out loud. It was horribly frustrating because although I knew how to spell it, I couldn’t say it out loud. Despite my anger, Mrs. King calmly bore with me until I got it right.

Because I suffered brain damage shortly after my birth, learning supposedly simple things such as tying my shoelaces, walking up stairs, and spelling were difficult for me. When brain damage occurs, the surrounding cells must be slowly trained to compensate for the dead or injured areas. This rehabilitation process, because it requires the assistance of many teachers and can take many years, forces one to abandon the cherished American pride in rugged individualism.

I remember how my dentist, during one particular visit, calmly worked around the restrictions of my paralyzed jaw. I wish someone had told me then that this would be the model for the rest of my life — fixing what’s broken over and over.

She wanted a porcelain doll. She talked about them constantly and sniffed them out in the unlikeliest places: garage sales, neighbors’ houses, behind the bank teller’s counter, high on a shelf in the feed-and-seed store. She said if she could have just one porcelain doll she’d never want anything else for the rest of her life. I told her I thought they were silly, they’d break, they couldn’t be cuddled.

She found one on sale in a stationery store and immediately decided to buy it with the money from her sixth birthday. She chose a dark-haired, dark-eyed doll with an old-fashioned, flowery, blue dress, a bonnet, real leather shoes, and lacy undergarments. It looks like you, we all told her. She named it Sarah Rachel, which she thinks is the prettiest name in the world, much prettier than Julia. She carried it to the playground and lost the shoes, stained its white face with soil when she dug up weeds with me in the back yard, and spilled tomato sauce on the bonnet at dinner. I felt impatient with her, uncomfortable with her lack of good judgment.

One day she carried the doll to me. A foot had broken off. Her father glued it back on, creating a brown epoxy vein around the ankle. Later she broke the leg off at the knee.

She doesn’t seem concerned. And I don’t know why I am. I know it’s not about a porcelain doll. Rather, it’s that Julia is a porcelain doll to me. Hard. Brittle and fragile. I can’t reach her so often these days. She’s frustrating, enraging. She won’t let me in. I touch her china-doll face and feel need, emptiness, hunger for things I can’t identify, but she won’t accept my warmth or give in to genuine, simple contact with me. She hardens even more when I touch her.

Have I already damaged her somehow? She’s like her doll, still smiling despite injury, refusing comfort. It bothers me that her most cherished treasure is an aloof, painted-on-perfect doll and that appearances matter so much to her. She’s so taken with external flashiness. It’s her porcelain versus my sweat pants. Is this the struggle we’ll be in all our lives?

My daughter is nearly three. When she was six months old, she sat in my lap in a dark room hazy with cigarette smoke. His final pleasure. I said, “I don’t think she’s going to have my personality.”

He said faintly, “I should hope not. When we were five you threw a knife at me.”

We met in nursery school, where our favorite activities were painting rocks and riding our tricycles in ladies’ dresses until they got caught in the spokes. Best friends until puberty, we invented every game we played, including a drawing game that the surrealists also invented, Exquisite Corpse. He would have loved to have known that, especially the name, but I found out too late.

We traveled different paths for a while during the late seventies in San Francisco, the apex of the bizarre flowering of gay culture. I remember him saying languidly, “I’m on a new health kick: I’ve decided to give up crystal meth.” I was living at the Zen Center, eating soybeans and seaweed, getting up when he went to bed. But we were still friends.

The last thing his dying lover told him was, “Don’t stop painting.” He quit his job and went to art school, living on nothing. His wonderful paintings were filled with his twisted, nightmare Catholicism, his grief, his fear. He died slowly.

Once we were in North Beach in a Chinese pharmacy; I was buying herbs my acupuncturist had prescribed. He was charmed by the desiccated, foot-long flying lizards. “What are they for?” he asked.

He was too poor to buy one. Why didn’t I? I didn’t understand that soon he’d be gone. Never again would I receive his weird presents — a prosthetic eyeball, a silver Christmas ornament in the shape of a skull. Words don’t do it. Nothing will fix it. I miss him so goddamn much.

My father is a born handyman, and I became his volunteer apprentice as soon as I could walk. I eagerly passed him the correct tools upon request. Occasionally, I would help him by fitting my small hands into tight places he couldn’t reach. He could assess, attack, and solve every conceivable household problem. I was proud to assist him. I believed his abilities were unlimited.

When I was five years old, my mother took her own life, and for the first time my father was faced with something that couldn’t be fixed.

I continued to be his apprentice, but my motivation had become a desperate hope that he would turn, look at me, and say, “Michelle, your heart is broken. I’ll fix that next.” It’s been twenty-three years, and I’m still waiting.

The trick isn’t in the fixing; it’s in the knowing — knowing when to fix something versus when to throw it away and get a new one: a sweater, say, or a chair, ragged carpeting, a difficult lover. The trick is in knowing when it’s broken in, like the old running shoes that just need new insoles, and when it’s just plain broken, like the chair with the bad spring.

Fixing is an investment of time, energy, faith, and some combination of heart and brains. But fixing is also a judgment, a way to see. Is something really broken or just not in the shape we want it to be? And maybe fixing is presumptuous, forcing something to be what it isn’t, like trying to revive a wilted orchid. If you want sturdy, get a cactus.

Some things can’t be fixed. There was value in what they were. And maybe in what they could be. The point is that they are different — maybe new and improved, maybe not, but different. Different is hard. Different is change. And change means you need to be fixed too, or at least readjusted.

Maybe the whole thing says as much about the fixer as it does about whatever is broken — facing change and risk and uncertainty, and never really knowing if the attempts to fix will “take” or how long it might be before the same thing breaks again. That is the trick: to make the transformation anyway, never really knowing.

We lived in Guatemala for ten years. We were Americans, but we stayed through a lot of the troubles. My husband was an artist. The house was small, half adobe, half concrete block, with a tin roof. We didn’t need much because we had each other.

Now I live in Guatemala by myself. I don’t need much, but I need a little more than when I had Ray.

I fix the extension cords now. I have a lot of them, and they are always in need of repair. I have a lot of tools, too. They belonged to my husband. I never used them before, but now I do. Last Sunday I tried to use the wire stripper to separate the wire from the plastic casing. The extension cord kept getting shorter with each attempt. Then a friend came by. He said, “Give me a knife.”

I did and he fixed the cord right away.

Today the light keeps going on and off. This time I’m able to fix it myself by adjusting the socket. It makes me happy. Maybe it’ll work for another week. I can’t look too far ahead anymore. I just take things a week at a time.

The day after I buried my husband I was hanging around the house, feeling sorry for myself. And I was angry at Ray for having left me alone. Then I heard someone outside calling for the woman next door. I knew she was gone for the weekend, so I went outside to offer this information.

The young woman standing there told me she was only in Panajachel for the day and didn’t know anyone here but my neighbor. “What can I do?” she asked.

I told her, “You could take a boat down by the lake to one of the Indian villages, have lunch, and take the boat back.”

I went and had a good time, but I also felt guilty because I wasn’t feeling guilty. I wasn’t sad that Ray had died; I was relieved. He had been very sick for six months, drifting in and out of a coma. I took care of him myself. The doctor said, “It’s only a matter of time.” When he died he didn’t say words of farewell like they do in the movies. I think the last word he said a couple of weeks ago was codeine. Then one day I went outside to plant something in the garden, and when I came back inside he was dead.

A few days later, when I went back to my job in the bookstore, I hoped I wouldn’t be criticized for returning so soon. A couple of friends said, “You did your mourning while Ray was sick. Don’t feel you have to continue. You have a right to be happy.”

And I am happy. Not all the time, but then I fix the extension cords and it’s like a good omen. 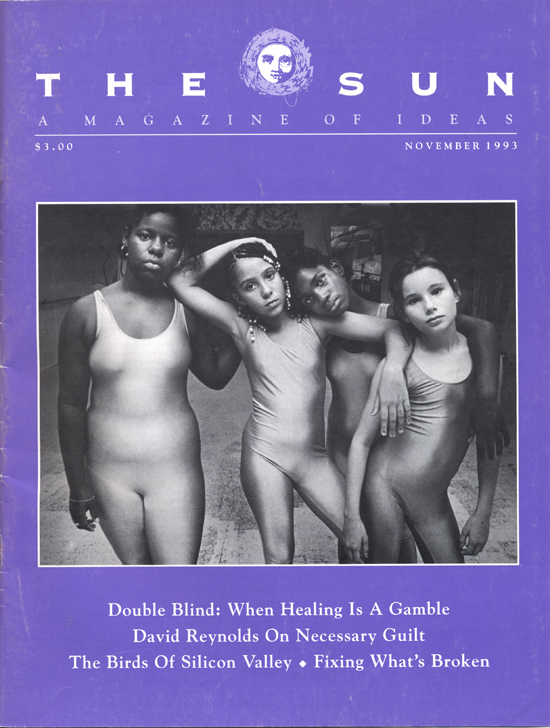 The Birds Of Silicon Valley

When Healing Is A Gamble