Where The Wind Comes Sweeping

Right-wing extremists used to despise Communists; now they despise the U.S. government. If the Devil didn’t exist, we’d have to invent him.

House Speaker Newt Gingrich insists there’s no connection between reactionary rhetoric and reactionary violence. “It is grotesque to suggest,” Gingrich said after the Oklahoma City bombing, “that anybody in this country who raises legitimate questions about the size and scope of the federal government has any implication in this.”

Last fall, Gingrich drew a connection between Susan Smith, the South Carolina woman accused of drowning her two children, and the moral failure of the Democrats.

Democracy stretches like a cat, moves to a spot by the window where the sun makes a small home on the floor. The fridge is empty, the rent unpaid. Peace and Justice, her old friends, don’t come around anymore.

How quickly the bombing becomes an Event, like the Kennedy assassination or Three Mile Island (or the Simpson trial or Madonna’s next tour). We stare, fascinated, at America’s fallen gown. We try to make sense of the poetry of disaster.

The television commentators understand that we need to be entertained, if not with NYPD Blue then with Terror in the Heartland. They pick through the rubble for some meaning; at least, they assure us, we’ve once again been reminded of our “common humanity.”

Perhaps it’s easier to focus on images of rescue and heroic effort than on the terrors we live with every day: industrial pollution, drive-by shootings, nuclear missiles still blinking in their silos.

Perhaps it’s easier to feign innocence than to recall our history of conquest and violence. When has the heartland ever been innocent? In the last century, Oklahoma was the dumping ground for more than sixty Native American tribes forced into exile from their homelands.

“We say that the hour of death cannot be forecast,” Proust wrote, “but when we say this we imagine that hour as placed in an obscure and distant future. It never occurs to us that it has any connection with the day already begun or that death could arrive this same afternoon, this afternoon which is so certain and which has every hour filled in advance.”

Are nuclear plants a terrorist act against future generations? Deaths from radiation released in the Chernobyl disaster could reach fifteen million worldwide in the next ten years, a Russian physicist predicts.

The bombing is a sign, but if we look at it through the veils of fear and repugnance, we see only a skinny little message. We see something that needs to be stamped out, as if evil were a cockroach.

The president calls for the death penalty.

Once, I burned all my old letters, photographs, yearbooks. It was an attempt to erase my personal history, one part of my personality declaring its independence from the rest of me: an act of sabotage dressed up as spirituality.

Unable to love themselves, violent reactionaries fall in love with something they call America. But they don’t want to share her with blacks and Jews and bureaucrats. They want freedom in terms they can understand, not in all its wild unpredictability. They want to erase what can’t be erased: the messiness and contradictions of a democratic society, the unruliness of their own lives. They love America the way wife beaters love marriage, the way Newt Gingrich loves the life of the mind.

When I knew him, twenty-five years ago, K. was an avid outdoorsman. He had tracked lions in Africa, elk in Montana. Once, I asked him what he enjoyed most about hunting. Setting up camp? Waking before dawn to stalk a big animal? He shook his head and smiled.

I could never tell when he was putting me on. He had an extensive gun collection, including a submachine gun. At the height of the Cold War, he assured me that an attack by Soviet ground forces could happen any day — and that he’d be one of the heroes fighting to save us. “I’ll lean out my window,” he said, “and nail them as they come across the Whitestone Bridge.” 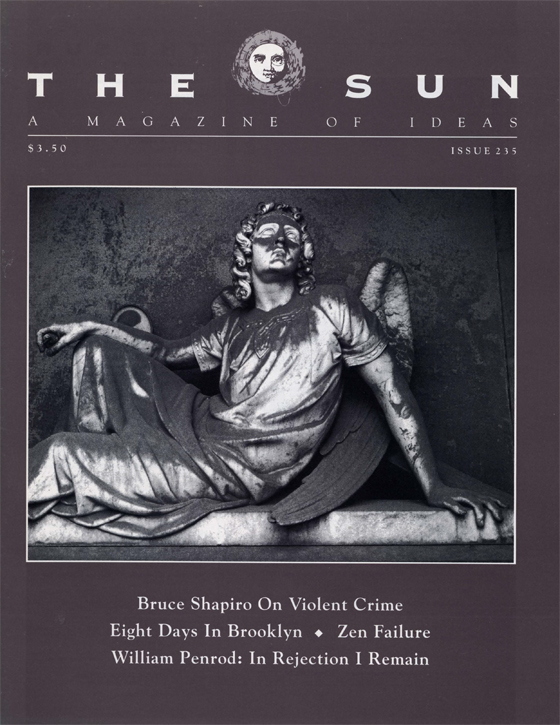