Two years after I got out of the rehabilitation hospital, I went back to finish college at Haverford, a small Quaker school just outside of Philadelphia.

Haverford had an agreement with neighboring Bryn Mawr College that allowed students to cross Highway 50 and take classes there as well. Since American literature was my passion, I took courses at Bryn Mawr on Hemingway, Faulkner, Fitzgerald, Sherwood Anderson, John Dos Passos — my heroes all.

The American-literature classroom was on the second floor of a building constructed in the nineteenth century. There was no elevator, but rather two sets of steps, some fifty-six in number. Because of the weakness in my legs, the only way I could get upstairs was to turn around, grab left crutch in right hand, hold on to the low and wobbly handrail, and hoist myself up backward. It took a long time, but I was young and full of piss-and-vinegar, and I wasn’t about to let a rickety staircase keep me from a class on the subject I loved.

One day, the president of the college, a Dr. McBride, came up to me as I was approaching step number thirty-nine. She was herself a cripple — one of her legs had been atrophied by polio. She stopped, smiled up at me, and said, “Hi. What happened to you?”

And I paused in my mountainous climb, and looked at her, looked at her without a smile, looked through her, and said, “Nothing.” And I continued on my expedition.

Linda Hoag of the Los Angeles Free Clinic writes that “denial can be a healthy survival and coping technique. Often, those chided for denial have fought best and lived longest. . . . Denial and hope are two sides of the same coin and no one but the patient can know which side of that coin is face up at any given moment.”

The concept of denial is very popular these days. It grows out of Elisabeth Kübler-Ross’s five stages of dying — anger, denial, bargaining, depression, and acceptance. Shrinks, in their all-encumbering way, have decided there are other traumas to the psyche that take us through the same five stages — upheavals like war, molestation, sickness, divorce.

My reaction to Dr. McBride’s question was a non sequitur that one might label denial. It was, after all, impossible that “nothing” had happened to me. I had lost the use of 80 percent of my body at age eighteen — when the body counts so heavily. I was so stunned at what had happened to me, goes the theory, that I refused to look at the pain of it, and rejected anyone who came along and tried to remind me of it.

As much as I admire this concept and the belief in denial, I think there were other things going on in my head as I met with Our Lady of the Stairwell. For example, there might have been an element of simple impatience (how could she, of all people, ask such a dumb question?), coupled with a pervasive numbness.

Bo Lozoff, master writer on things spiritual, reports from his own youth,

The way I responded to a troubled family life was to withdraw and become sullen, closing off not only to everyone else, but to myself as well. I didn’t have the slightest idea what I believed in or even what I felt. In fact, I thought I never felt a thing [so that] by the time I got into college, I was very screwed up and basically numb. I had no thoughts or feelings of my own.

Numbness is a way of life for many people in their late teens, and since I was working with (and through) a new and unwanted body, numbness was one of the best ways for me to deal with the world within, the world without.

I stuck out like a sore thumb. I didn’t want to be so visible, but crips were quite rare in those days — at least crips up and about and doing things, venturing out into the world. I was the only one in the two schools who used crutches; I was certainly the only one who mounted stairs backward.

At the same time, I was fed up with people who thought that, on the basis of my orthopedic equipment, they owned some part of me. For their impertinence, they would get the hot poker of my words and the icepick of my avoidance. The fact that Dr. McBride was a crip as well made no difference at all to me. In fact, it probably worked against her: she damn well should have known better than to stop me on the steps for such idle chitchat.

My terse response was a means to short-circuit any and all questions, none of which should have been asked in the first place. It was simultaneously a plea for No-Pity and an announcement of Don’t-Tread-On-Me. “If you want to get to know me, try a better road,” I was saying. Joshing, silliness, irony, even mockery (all techniques used instinctively and well by my classmates) were a thousand times better than the point-blank question, which I loathed and hated.

In other words, I wanted people to acknowledge my differentness by leaving me alone.

When I look back on the subsequent years of what the disabled writer Richard Brickner calls “our second life,” I look for moments of change. When, I’ve often wondered, was the first time I didn’t answer smartly to an impertinent question from a stranger? Where was the breakpoint, the point at which I became integrated enough into my new body to answer without rancor a very natural inquiry about what had happened to me?

It probably had something to do with my wife. For the first years of our marriage, I hid my body from her. I never allowed her to watch me bathe, never undressed for bed until the room was dark, was never naked before her. Imagine the effort that went into that: living in the same three rooms with a person for three years and never letting her see me in the buff.

But one summer afternoon in 1959, I was lying in bed with nothing on but a sheet. She had just come in from shopping, and suddenly the sheet was down and her hands were all over me, and she was telling me that my body was the body of Christ. (Neither of us was particularly religious, but the medieval icon of the excruciatingly thin, almost-naked man-god stretched up and out was part of our culture. She kindly transferred that image to me.)

I suspect our real marriage started then — when I learned that my body, which I found so offensive, was not vile to her; that perhaps she loved me despite it, possibly even because of it. Body no longer needed to be the central issue in our relationship.

The second stage in my coming to have affection for my body had to wait ten years, when (at age 35!) I became a hippie. It was during the Summer of Love. Yes, I had been smoking dope; yes, it was in the hot tub; yes, there were lots of stoned hippies lying about, giggling and carrying on.

What happened was a repeat of what had happened with my wife, but this time it was in front of ten or fifteen people, most of them strangers. I don’t remember consciously thinking, “I’m going to do it now,” but I got out of my clothes, sheared off all of my equipment, and revealed myself — my thin legs, my melon stomach, my hipbones sticking out “like outriggers” (to borrow Mark O’Brien’s felicitous phrase). It was daytime — there was no cover of darkness — and I remember thinking how good it felt to be buck-naked in the sunshine.

Fortunately, I’ve never stopped being a hippie. In fact, several years ago, the Whole Earth Review requested a photograph of me to go along with an article, so I had a friend take a couple of shots of me in the altogether, in my hot tub, with a flower on my ass. We shipped the photos off to the Review, where the editors cut out the posy on my behind, even cut off my behind, cropping out everything except my mug. “What a bunch of pansies,” I remember thinking.

It’s been a long ride from Bryn Mawr College to my voluntarily sending out a picture of my fanny to be published before the world. I tell you, if I were only — at this very moment — going up to my literature class, stopped by the good college president and her pointed question: I could smile (in a way I could never have smiled then, so many years ago) and tell her that I don’t have time to jaw, here on the steps, but if she would care to join me, later in the afternoon, in the redwood tub, both of us au naturel, with a glass or two of chilled chablis, we could discuss at some length what happened to me, and to her, and what will, presumably, happen to all of us.

The reason I subscribe to The Sun is that you have the courage and good sense to leave a fine ass and a fine flower in the picture, where they belong [“The Day I Got Buck-Naked with a Daisy on My Ass,” Lorenzo Wilson Milam, August 1995].

Keep up the good work.

Mike Schwager Chicago, Illinois
More Letters
What Do You Think? We love getting letters to the editor for our Correspondence section.
Has something we published moved you? Fired you up? Did we miss the mark?
Send A Letter 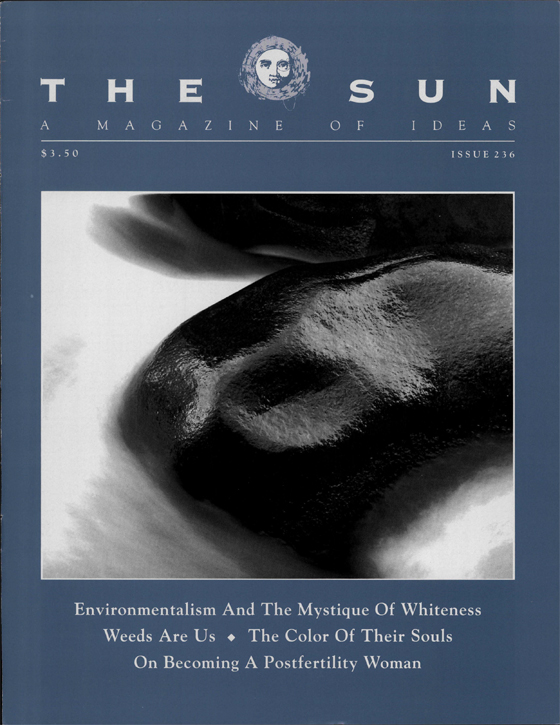 Harry In The Garden