Since I moved to Phoenicia, New York, the sky has become my main cultural influence. I can’t afford to go to the movies; I have no TV; I don’t like trees, or grass. So each morning I’m relieved to see the sky appear, with her curious, fresh ideas.

In Manhattan, where I formerly dwelt, only a partial sky exists. Man-made mountains delimit her expanse. Here, God-made mountains cut off the sky. I am grateful for these encumbrances. A total sky demands total attention.

The following is my Catskill sky journal. (All shapes referred to are clouds.)

6:02 P.M.: The sky has grown paler and paler all day. Now it is white as an egg. To the north, Goofy, the cartoon character, swaggers.

June 27
5:38 A.M.: A low, watchful, suspicious sky. I find myself moving through the house surreptitiously, as if the firmament were a cop. (Do skies remind me of cops because they both wear blue?)

2:41 P.M.: The sky has cleared, and I see in the distance a demon from Ghostbusters wearing a catcher’s mask.

June 30
3:14 P.M.: A large elephantine shadow in the south, which appears to be defecating.

3:28 P.M.: A strong, alarming wind emerges from the elephantine shadow.

I love The Sun. Every issue is a treasure chest of true and authentic stories, interviews with exceptional people, and amazingly poignant, revealing photographs. Stories in The Sun, including those in Readers Write, may be on the sad and sometimes unpleasant side, but they always come off as genuine.

Why, then, would you choose to publish a piece of dreck like Sparrow’s “Catskill Sky Journal” [October 1999]? If Sparrow is such a poet, why doesn’t he invent his own images to describe a sky he supposedly loves, instead of relying on such corporate clichés as Nike insignias and demons from Ghostbusters? Must we be subjected to mindless product references even in The Sun? I feel betrayed. Now, this is offensive.

Ann Schmidt Winslow, Arizona
More Letters
Thinking About Writing Us a Letter? Give in to the temptation. We love getting mail. Write us a letter! 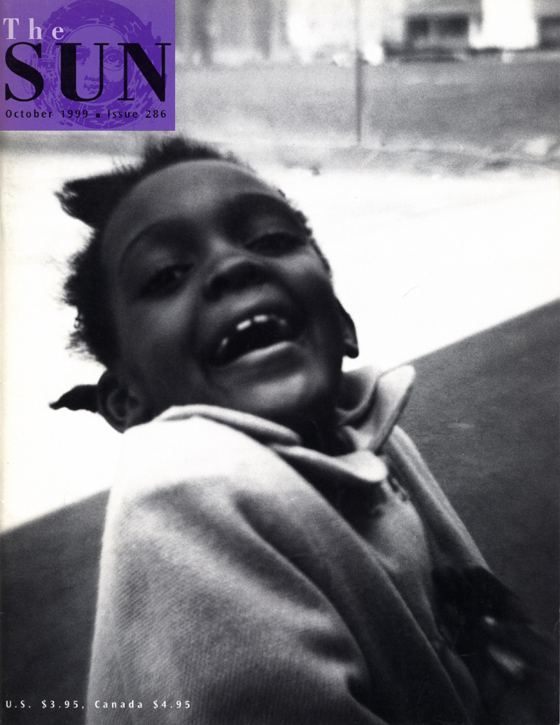 The Dead Boy At Your Window