Outside my window, sparrows confer in the bottlebrush tree. Amid the tangled branches newly leafed in brilliant green, they chirp about important matters while a hummingbird hovers around the edges, sipping at frizzy red fronds. The winter rains have finally ended, and everything feels washed-clean and ready. Even the dried insect wing stuck to my window screen quivers with excitement.

This is what my mother, in the end, couldn’t bear: the forward rush of possibility, the hum of new life buzzing in the air as winter opens to spring. Surrounded by such sweet promise, she felt as empty as a footprint pressed in dried mud. Ten years ago, on the evening before the first day of spring, she took off her blue parka, hung it on a spindly pine, walked into the Charles River, and drowned herself.

In years past, I have not taken notice of such subtle seasonal shifts, but this year I’m especially attuned to them. I see changes daily — the hard red buds on the jasmine vines, the extra bit of daylight before dusk — aware that each one brings me closer to the tenth anniversary of my mother’s death. I’ve observed Mom’s yahrzeit every year, always choosing to be alone, grieving in private. Usually, as the sun sets, I get out my best photograph of the two of us — sitting on the deck of the dune house in a gentle rain, smiling at each other — and put it on my kitchen table. I light the memorial candle, sweeping my hands in circles above the flame, drawing its warmth in toward my heart, my head, hoping to find some glimmer of Mom in that heat.

Seven months before my mother died, I moved from my hometown of Boston to Berkeley, California. Lisa, who’d been my first female lover and was now my closest friend, had coaxed me to join her there, offering me a place to stay until I found an apartment of my own. A few weeks after my move, my father called. “Mom’s not doing well, Es,” he said. His tone — usually full of warmth, or humor, or judgment — was stretched flat and thin, like a sheet of wax paper. I lay on my back in Lisa’s living room and listened to Dad’s voice in my ear. The dingy green carpet smelled like an old record jacket, and Lisa’s roommates kept stepping over me.

“A flare-up?” I asked, but even as I said it, I knew he wasn’t talking about Mom’s physical health. (She’d had multiple sclerosis since I was seven.)

“She can’t sleep,” he said. “She’s scared to be alone. She doesn’t want anyone with her. She’s been curled up on the couch for two days —”

“I’ll come home,” I interrupted, not wanting to hear the list get longer.

“No, wait,” Dad said. “She says she wants to go to the hospital.” He meant the psychiatric hospital. “We’ll call you tomorrow when we know what’s happening.”

My heart was too big for my body, my body too big for the house. Lisa’s roommates were moving quietly around me, pretending that they hadn’t overheard my conversation. Lisa arched her thick, dark eyebrows and walked slowly toward me, her arms outstretched as if to close the gap that had been widening between us since the day I’d arrived. I smiled like a nervous kid about to be punished, then ran outside. I’d been sleeping in the living room and keeping my few possessions under the house. Pulling open the crawl-space door, I crept over to my old red backpack that my parents had given me for my fifteenth birthday. Sitting there in the cool dirt, I held tightly to it: the closest thing that felt like home.

The next morning, I was alone in the house. My sister phoned. She sounded like a TV newscaster — brisk, efficient, confident — so I knew the news was bad. “The hospital is what she wants, Es,” she said. Her voice softened into a sob just before she hung up.

I got on my bike and pedaled hard. I needed to ride somewhere, but had no place to go. Through my tears, the trees looked like green sea glass. My legs throbbed and my arms ached, but I couldn’t stop. Like a fish, I opened my mouth in big O’s, warm air filling my chest.

When I got back to Lisa’s house, the upstairs neighbor was working on his van. I’d met him once before. He took one look at my tear-stained face and invited me in. He led me up his creaky wooden stairs, through a long, dark hallway, and into his warm, yellow, sunlit kitchen. Without asking, he made me a mug of raspberry tea with honey. I sipped the tea and listened to him talk about his van. “Want to see a movie?” I asked.

In the dark theater, as the opening credits began to roll, I leaned toward him and whispered, “My mother.”

“Yeah,” he said, nodding as if he understood. Then he wedged the bucket of popcorn between our thighs.

When the lights came on at the end, he said quietly, “I don’t see my mother anymore. She’s tried to kill herself too many times.”

My mother was in the psychiatric hospital for five months. The first time I went to visit her, I stood outside and looked up at the huge brick building, searching for the circle of her face in one of the windows. Somehow I believed that, if she were looking down, watching for me, everything would be all right. But all I saw were empty rectangles.

I was the only one in my Suicide Survivors grief group who wasn’t angry. How could I be angry? I had watched her shuffle back and forth in that mint green room, unable to keep still after a bad reaction to an antidepressant. She’d looked at me, her dark eyes filled with love, and said, “I’m much, much sicker than anyone realizes. I’m the only one who knows how terribly sick I am.”

I’d watched her emerge from that hospital as parched and crumpled as the fall leaves.

Last spring, talking to me on the phone, my father asked, “But you did love her, Es, didn’t you?”

Stunned, I answered, “Of course I loved her. Why are you asking me that?”

The evening my father called with the news of Mom’s death, I’d been at a demonstration in the city. I wasn’t very politically active, but that afternoon, biking home from my house-painting job, I’d seen a flyer on a telephone pole and, as if pulled by an invisible cord, reversed direction, pedaled to the BART station, and boarded a San Francisco–bound train. I don’t remember what I was protesting, only how good it felt to yell into the cool night air, strangers’ warm bodies all around me, my voice flying out into the light-streaked dark of Mission Street. After about an hour, the crowd began to drift off in little groups, but I wanted to stay out in the middle of the cordoned-off street and keep yelling, hands in my sweat-shirt pockets, face tipped toward the moon.

When she was alive, I’d sometimes imagine my mother gone: no more of her fierce love for me, and her disapproval. No more of her deep pride in me, and her envy. No more feeling my scalp sting as she tugged my hair while holding me in a warm hug. No more worrying about her, watching her body grow weaker from MS while her fears grew stronger. No more feeling guilty that I’d had an easier life than her — that my parents hadn’t abandoned me to an orphanage when I was a baby, that I hadn’t been poverty-stricken. Years later, I see how much I didn’t know then about loss. Now I understand that death takes up at least as much space as life.

Sometimes my grief is like the buzz of an out-of-range radio station, nothing but the prickly sense that the air is full of zigzagging ions. Sometimes it’s like a spotlight on a dark night, stilling me with its brilliant beam. I’ve worried that I haven’t grieved enough. I’ve worried that I’ve grieved too much, letting Mom’s death stand in for all the hollow, weakened parts of me.

When I ask my brother in the Midwest how he’s going to spend Mom’s yahrzeit, he mumbles something about a basketball game, then says, “I’ve always thought that after ten years I would de-cathect.” I laugh, assuming he’s making a psychologist joke. But then I hear the sorrow in his voice. “I’m just so tired of suffering over her,” he says.

I remember when he was a boy, he’d rub his pitching hand around and around on my head for good luck before each Little League game. If he couldn’t find me, he’d go tearing through the neighborhood, yelling my name. I think back on this now: the warmth on my head, that feeling of power.

This year, on the eve of my mother’s yahrzeit, I’ll once again light the memorial candle by myself, but the following afternoon my two closest friends will come over. We’ll sit together in my kitchen, windows flung open to the newly blooming jasmine, the yellow glow of lemons ripening on the tree. In the spring air, my friends will read letters I’ve asked them to write to my mother, though neither of them knew her well. I’ll listen carefully, hoping to learn something new about what Mom’s death has meant to me. When they’re done reading, we’ll eat refrigerator cake: First you take rich chocolate cookies, spread them with whipped cream, and stack them up in little towers. Then you lay the towers flat on a plate and connect them with more whipped cream. Once you’re done, you stick it in the fridge, and in a few hours it magically turns into dark chocolate cake. My mother used to make it for me.

I was thankful for the February issue of The Sun. Suicide and mental illness are unpleasant subjects and therefore rarely explored. I was surprised to find my experiences, thoughts, and fears surrounding these taboo topics mirrored in Esther Ehrlich’s essay “Spring” and Alex Mindt’s story “Free Spirits.”

Like Ehrlich, I observed the tenth anniversary of a suicide this past year. Just as Ehrlich hoped to learn something new about what her mother’s death meant to her, I have struggled to understand what my boyfriend’s death meant to me. It was helpful to share that experience with Ehrlich through her writing. I no longer felt so alone.

Alex Mindt’s narrator in “Free Spirits” waits to see if he, too, will develop the mental illness that afflicts his father. Likewise, I waited throughout my twenties to see if I would develop my grandmother’s schizophrenia. Like Mindt’s character, I felt as if a part of me wanted to develop the illness, thinking it would somehow connect me to her, help me understand her.

It was my grandmother I was thinking of when I read Veneta Masson’s poem “Her, Rising.” I have imagined that my grandmother may still surface within me in other ways besides mental illness — perhaps in the way I smile, or enjoy a Heath candy bar, her favorite.

More often than I would like, I experience a nagging melancholy. It says, “You are different. No one could possibly understand you.” It is a feeling of isolation, of being cut off from a community. The Sun assuages that feeling for me and quiets that voice.

Jennifer Hanks Merlin, Oregon
More Letters
What Do You Think? We love getting letters to the editor for our Correspondence section.
Has something we published moved you? Fired you up? Did we miss the mark?
Send A Letter 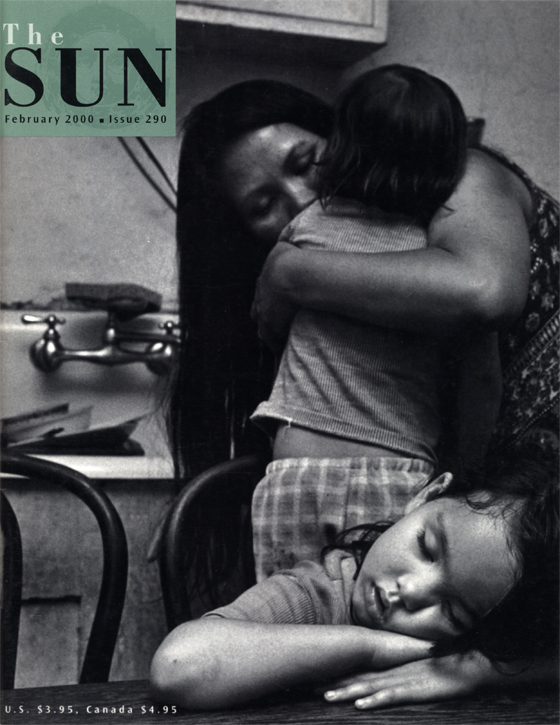