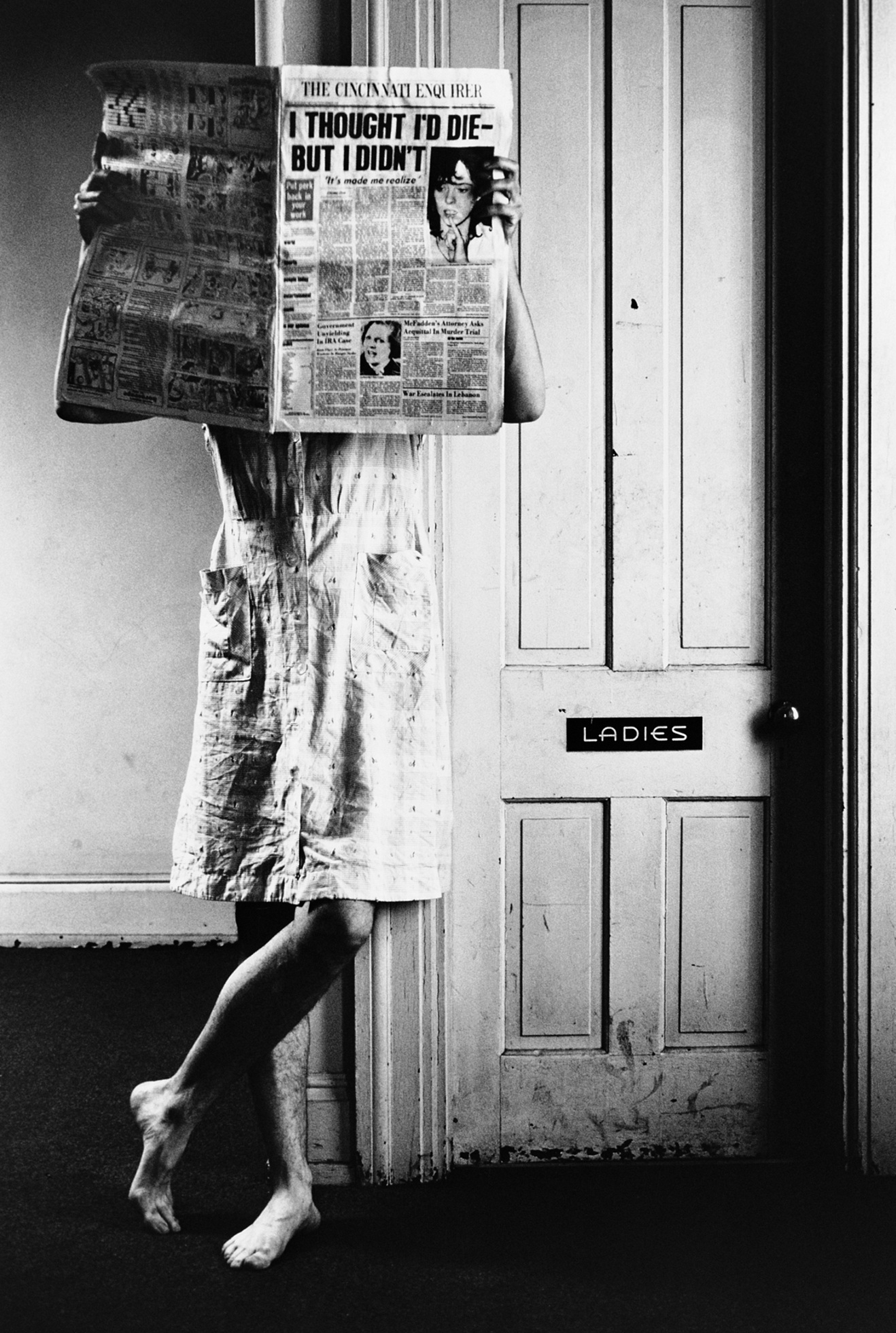 “My front tires are so worn I can see the steel belts,” Michelle told me on the phone. “They could blow out any minute. Will you come with me to Kingston to fix them?”

We drove on the shoulder of Route 28, so that other cars might pass. Our pace was that of a horse and carriage. “I feel like a carpenter in 1814!” I said.

Travelers on Route 28 expect the ground to be a blur. When we toss a coffee cup away, it disappears, or enters the blur world. But Michelle and I could see each coffee cup. A tree would approach as if we’d thrown out a rope with a grappling hook and were pulling it toward us. Nothing is disturbed at that speed. Our car did not whoosh or create wind. A crow continued eating a squirrel’s guts as we passed.

“Did you ever see Kabuki theatre?” Michelle asked. “Each action is exactingly slow.”

“In America,” I said, “bald tires teach us Kabuki driving.”

I live in the town of Phoenicia, New York, in the Catskills. I have no TV set, and my radio receives no station clearly.

Last Saturday I saw my friend Julie at the Exxon station. “Did you hear the news?” she asked. “John F. Kennedy Jr.’s plane is lost at sea.”

My dear, I thought. I did not expect him to die young.

Three days later, reading the headlines at Kirks Market, I noticed that our nation was overcome with grief. I was as surprised as when Princess Di was killed.

Some days I feel utterly not American.

Princess Di and John John were two somewhat self-destructive young rich people. Di’s boyfriend was a millionaire who told his drunken chauffeur to drive faster to elude photographers. John John was an inexperienced pilot with a bum ankle who flew off into a foggy night. Why do we insist on idealizing these two as a medieval princess and a “knight of Camelot”? Could it be that we feel . . . guilt?

Americans drink celebrities’ lives the way the ancient Minoans drank the blood of slain bulls. Famous lives give us power and resolve.

Unfortunately, celebrities are tortured by our attention. Even the means of their deaths suggest their pain. Di was speeding to avoid one more photograph. John John piloted his plane in the fog because he was uncomfortable on commercial airlines.

If we admit the unhappiness we cause the celebrated, we must accept the blame. Instead, we imagine them as perfect saints dying predestined deaths.

Suppose we created a moratorium on fame. Imagine our newspapers filled with the lives of garage mechanics, veterinarians, and secretaries. Princess Di and Prince John John might still be living — though we’d have no way of knowing.

I lie in the bath and try to remember if Paul McCartney is still alive.

On a visit to New York City, I ask for a Metro Card at Junction Boulevard in Queens. The token vendor — a man in long, dangling dreadlocks — says, “The machine is down, my brother. You have to buy tokens.”

How warming is the word brother!

Today, Chronogram spoke to Rat Bustard, one of the legendary innovators of hardcore/pop/metal, at his home outside Huberville, New York. His present band is Monkey Kick, but he is best known as a member of the eighties band Flex.

Sparrow: Tell us about your new album.

Rat: It’s called Rumpus Hump Us, and it’s cool. It’s got a hard sound. We’re getting back to our roots. “Brain Outside My Head” and “Pimp for a Day” are kickass tunes.

Sparrow: When will it come out?

Sparrow: What was it like to be in Flex?

Rat: It was cool at first, and then it was fucked up.

Sparrow: What exactly broke up the band?

Sparrow: Can you be more specific?

Rat: On March 3, 1987, Gregg P. Kisman (our bass player) gave me a royalty statement for our second album, Underarm Zero. My share was $27,861.31. My accountant examined this figure and found it questionable. After a series of inquiries, we were able to obtain the sales figures from Red Ass Records. They showed 121,040 albums sold. We calculated my accurate royalties to be $56,190. Kisman’s attorney, Abel Kaus, explained that the royalty statement I received on March 3 was for a fiscal year beginning January 18 and extending through September 17. Kaus maintained that this nine-month fiscal year was stipulated in our contract. A three-month hiatus followed — the three months in which the majority of our albums were sold. My attorney, Harvard Blegsen, examined the contract and found that a hiatus was stipulated, but no duration was mentioned. We instituted legal action, and Red Ass Records settled out of court for $9,400.

Sparrow: Well, at least you have your memories.

Rat: That’s for sure.

Last Tuesday at 9:15 A.M., an art earthquake hit. All the paintings in northern Westchester shook.

This is a selection from 600 Snake Dances, my forthcoming dance instruction guide for snakes.

132. Touch your midpoint with your head. Straighten.

138. Slither slowly under a red banner.

141. Bring your tail almost to your mouth.

“I consider myself an extremely light-skinned African-American.”

Johnny Applesauce walked the byways and paths of America, always barefoot, flinging applesauce here and there.

Often a postman would meet him on a back road and call: “Hail, stranger! Ye look worn and tired from a dusty day of travel!”

Whap! A gob of applesauce would land on the postman’s face.

And so Johnny Applesauce continued, sometimes spooning applesauce into the mouth of a baby, sometimes pouring it on the doorway of a sporting-goods store — on and on, across this great nation.

Overheard on a bus:

The Elian Gonzalez impasse raises one important question: what is a nation? Elian is forced to choose between a Spanish-speaking enclave of Cubans in Miami and the Spanish-speaking island of Cuba nearby. Can a six-year-old honestly distinguish between the two? It is clear to us that we live in a land of freedom and truth, while Cuba is a soul-squeezing dictatorship, but can Elian make these distinctions?

In fact, until they reach a certain age, humans cannot recognize nations. Similarly, in extreme old age, it is possible to forget which country one inhabits. A severe fever, too, can bring on amnesia of nationality. Even travel may confuse one’s sense of place. The 1969 film If It’s Tuesday, This Must Be Belgium confirms this in its title. Even the president of the United States must awaken in certain rooms and forget which country he is in.

The existence of nations, then, is a flickering reality that appears and vanishes oddly, much like sexual attraction. Children look at maps on which each country is painted a different color, and later are disappointed to learn that Ireland is not really purple or Singapore blue. When one is traveling by sea, each nation looks almost the same. I was chagrined to discover that most of Turkey resembles Pennsylvania. And what exactly constitutes a nation? Is Europe becoming one nation? Is Canada a country, or just a northern extension of the United States? (I notice that America’s Funniest Home Videos shows Canadian clips.) Is McDonald’s spreading American culture, or an international culture that is no more American than it is Scottish?

Through the lens of Elian, America confronts a Zen mystery: if you don’t believe in nations, you can’t see them.

My friend Daniel called me recently from Norway. You can make international calls now for free through the Internet. I could barely make out his consonants, and a marked echo bent our voices. “Thank God for the latest technology,” I said, “which has thrust us back into the nineteenth century.”

“There’s a guy who’s always walking on Route 28,” a teenage girl named Beverly said to me. “Did you ever notice him? He wears headphones, and he only waves at white cars. But he waves at me,” she said, smiling.

The nation is between presidents.

“Who needs a president, anyway?” my mother asks. “Today I went to the hairdresser. You know what he says? He says Bush is going to win if he has to kill Gore to do it.”

“Well, he’s had a lot of practice killing people,” I say.

I feel strongly that Gore should go into exile after this election, the way de Gaulle did when the Nazis overran France. From there, Gore should send communiqués to his loyal forces here in the United States. (I picture him in Mexico — perhaps Guadalajara.) After about six months, he should begin to raise an army.

Walter the bus driver says (in his German accent): “Let them both be president!”

I visited a rest stop near Newburgh on the Thruway. As I entered the front door, I found myself facing a McDonald’s — the only food source in the building — and I heard a Phil Collins song descend from above:

After a moment, the lulling repetitions of the song began to bore me, as they had in 1987, when last I’d heard them.

Why did the rest-stop operators choose this particular song as appealing to all Americans? Why this pathetic lament, of a bald man begging a woman who no longer loves him to sleep with him anyway? Is this the emotion we Americans share?

Outside the bathroom, I examined the vending machines that sold trinkets for kids — Pokémon stickers, keychains, glow-in-the-dark Silly Putty. In one machine, I saw a string of mala beads, the type Hindus use to recite mantras. (Interestingly, the large “guru bead” was missing.) These mala beads cost fifty cents.

Thank You For Choosing Mcdonald’s said the sign on the door as I left.

These excerpts were originally published in Sparrow’s column “Quarter to Three,” which appears in the Hudson Valley journal Chronogram (www.chronogram.com).

My Mother Hated The Song Of The Whales