When a man tells you that he got rich through hard work, ask him: “Whose?”

The rich are different from us.

Yes, they have more money.

Indeed, I thought, slipping the silver into my purse, it is remarkable, remembering the bitterness of those days, what a change of temper a fixed income will bring about.

Money helps, though not so much as you think when you don’t have it.

Making money ain’t nothing exciting to me. You might be able to buy a little better booze than the wino on the corner, but you get sick just like the next cat, and when you die you’re just as graveyard dead.

Wouldn’t you think some sociologist would have done a comparative study by now to prove, as I have always suspected, that there is a higher proportion of Undeserving Rich than Undeserving Poor?

Anyone who can live on welfare should be courted by Wall Street. He is a financial genius.

Americans live out their working lives, and most of their daily existence, not within a democratic system but instead within a hierarchical structure of subordination. To this extent, democracy is necessarily marginal . . . to their lives.

I am still looking for the modern equivalent of those Quakers who ran successful businesses, made money because they offered honest products and treated their people decently, worked hard, spent honestly, saved honestly, gave honest value for money, put back more than they took out, and told no lies. This business creed, sadly, seems long forgotten.

I was sad because I had no shoes, until I met a man who had no feet. So I said, “Got any shoes you’re not using?”

The darkest hour in the history of any young man is when he sits down to study how to get money without honestly earning it.

In order that people may be happy in their work, these three things are needed: they must be fit for it; they must not do too much of it; and they must have a sense of success in it . . . a sure sense that so much work has been done well, and fruitfully done, whatever the world may say or think about it.

America was not established to create wealth but to realize a vision, to realize an ideal — to discover and maintain liberty among men.

I have two enemies in all the world, / Two twins, inseparably pooled: / The hunger of the hungry and the fullness of the full.

The vices of the rich and great are mistaken for errors; and those of the poor and lowly, for crimes.

The Countess of Blessington

If all the rich men in the world divided up their money amongst themselves, there wouldn’t be enough to go round. 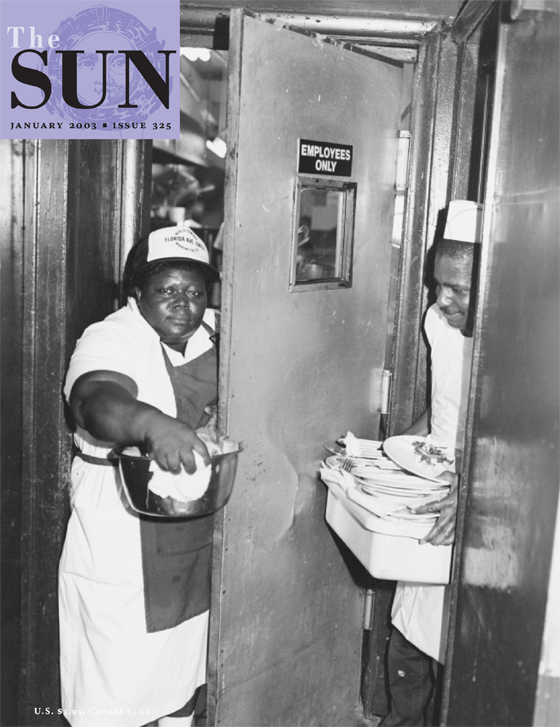 By Teresa Starr
The Sun Interview

Fingers To The Bone

Barbara Ehrenreich On The Plight Of The Working Poor