I rose with the light this morning, but the only Sun I could see was the magazine I fell asleep reading; the November issue, the one with half the Safranskys on the cover. Sy’s elastic deadline, now stretched to the limit, looms as heavy and gray as the weather outside. The time has come to produce something for the December Sun.

Like Sara, this piece arrives late but quite expected. I hope it pleases the old man.

It gets harder to do every month. The Sun shines brighter every issue. The November issue, wrapped in the most special cover ever, could stand next to any other masterpiece.

So this is an article about The Sun. Everything else I’ve tried to write about this time — opinions about radio, deep thoughts about the nature of nature, praisings of recently read books, nonsense humor — has run out of the fuel I need to complete anything I do: feeling. But I do have a lot of feeling for The Sun.

Family, Friends, Community . . . I guess that’s what The Sun is about, mostly. And with Mama and fresh baby on the cover, the distinctions are blurred. I feel connected to the whole Sun-scene by a complicated, ever-thickening weave of coincidental threads. There is a deep and beautiful kind of working together that makes me feel like one of many very right organs in a beautiful body. I have an important part to play in a whole too large and borderless for me to understand. So I just love it, and add my glow.

I want to hold the Sun-connections of my life up to the light, like a five-inch-tall Italian standing, hands aloft, under a heap of the finest spaghetti. I want to shake the November Sun at the world, and testify like a Baptist in heat.

I wish it was simple. It isn’t, so I’ll do what any confused writer does when obliged to tell a complicated story. I’ll start at the beginning.

I came to North Carolina for good in the winter of 1974. The pretty, rural New Jersey house we left behind was covered by eleven inches of snow and a growing crust of freezing rain. Our overloaded Chevy pooped out near Philadelphia, and the rest of the family was shipped south via Amtrak. I did the remainder of the trip alone, the way I live now.

Two days after leaving the gloomy North, I crossed the Carolina border. My windows opened to welcome the 70-degree warmth, my eyes looked up to the clear blue sky and my heart sang out in tune with my favorite song — “Here Comes the Sun” — which just happened to come on the radio the very instant my wheels crossed into official red dirt country. The radio station was WDBS, where I ended up working several months later.

We wanted to live in Chapel Hill. Before leaving New Jersey, we looked at a big map of the country and decided without reservation that This Was The Place. On one of my first visits to the Village (which it ain’t, but who cares), I ran across a fellow with a beard and pony-tail who hawked his magazine in front of the NCNB building. I bought the magazine, and liked it. The fellow was Sy. The magazine was the first Sun. (I’m not sure if it was, but it does make the story sound better.)

Alas, we were not fated to live in Chapel Hill, at least not right away. The fortuitous location of generous relatives in a nearby small town gave us the opportunity to live, rent free, in a giant house on Main Street. Cary Fowler, who writes like Ralph Nader ought to, eloquently laments the passing of the family farm. A parallel passing, though one not quite so dear to our survival, can be found in the disappearance of front porch culture. As neighborhoods give way to transiency and friendliness to privacy, the front porch is gradually being replaced by the patio. But this house, in this town, was Pure Living Front Porch Culture.

You could park a double-wide on that porch and still have room to ride a bike around it: We damn near lived on that porch. We cooked there, entertained there, greeted people there and said good-bye there too. The house was unoccupied for several years before we moved in, so everybody in town thought it was haunted. We just thought it was BIG. The thing was bigger than a church and a lot uglier. It was built by a county circuit judge back in the teens to accommodate his oversized proportions. The ceilings in the seven downstairs rooms were 12½ feet high. The tub in the upstairs bathroom was big enough for a six-footer to sleep in.

There was a porch upstairs too, which one could enter through a pair of door-windows at the west end of a 30x20 bedroom. This porch, enclosed by rusted screens, could accommodate only two or three people and no serious furniture. I used to sit there alone at sunset and reflect on the role of this sleepy little town in my life. To me, this town was real North Carolina. Almost every year of my childhood, our family would take the long pre-interstate highway trip from our near-urban home in New Jersey to visit relations in this town. My uncle was the town doctor. He was a family practitioner of the old school, with his black bag and ample skills always on call. Now in his sixties, his popularity and dedication persist undiminished. I sometimes think he is as strong and enduring as the confederate statue in the town square. Oh, the name of the town? Read about it in the November Sun. It’s “Graham: The Town That Said No to the Railroad.” Thank you, Barry Jacobs, for writing that one.

In the past several minutes two different people called me. Out of the blue. They don’t know each other. They were offering thoughts about an article I wrote almost two years ago. It was my first contribution to The Sun, and it was about Seth. (By now all Sun readers should know about Seth, so I won’t explain.) Sy liked the piece, so he put it in THETA, the journal he then edited for the Psychical Research Foundation. At about the same time Sy phased out of that position and, with his assistance, I was installed as his replacement. His shoes proved too large to fill, and I went on to do other things for the PRF. I now work at the PRF full time, and it is there that I now sit, wondering what to write next, paging through that November Sun. (I recently discovered that the PRF, which investigates hauntings now and then, once declined to check out this big old house on Main Street in Graham . . .)

Well, I seem to have taken that train of thought to the last stop on the line. Now I’ll wander about the rest of the issue.

Where else to start but with the saga of Sara?

I too am twice a dad. The first time I was denied the irreplaceable pleasure of assisting in the birth of our daughter; this was in the era of doctors who drugged delivering mamas and kept the papas in the pacing room. The second time I gloried in active participation. I’m almost sorry to say it was in a hospital, but the drama was unspeakably deep and intense. I never forgot the details, but I almost forgot the feelings . . . until Sy’s letter and Betsy’s narrative brought it all back. I sat on the shore of my thoughts, expecting the usual warm surf of words. And in comes this tidal wave. I was moved.

Bob Brezsny’s writing blows me away. A Tom Robbins with more sex and less God. Effortless overwriting rarely blows so clear a wind. My sail is raised.

Aha! Another connection. Down Main Street from the old house in Graham was (still is) an aging laundromat. It attracted the usual coin-op people: young marrieds, old pensioners, town drunkards, religious fanatics. David Guy’s simple answer to terrible vast mysteries reverberates in my mind’s sanctuary like the sound of a lever pulled on the candy machine in that laundromat at three in the morning.

I have never been in prison, or in Mexico, or in most of the occupations which helped shape Jimmy Santiago Baca’s vibrant life. But I resonate with the experience that sounds through his words. His miraculous, muscular spirit reaches out and elevates my soul. I feel like a boulder gladly moved from his path.

David Terrenoire is funny as hell. He should expect an acceptance from the New Yorker. Meanwhile, I’m glad he’s in The Sun.

I read through Stephen March’s poem like I’d cross a bucking bridge in a dream. It surges under my eyes. Like the woman on a dragon’s back, I slide off. But I can always climb back on, because I know there’s something to hold on to.

Sage may be a spice, but it’s a nice metaphor, too, for Leaf the Wise, one of the world’s meatier vegetarians. Leaf is one of those rare people who know themselves well, like what they know, and grow anyway. He always seems to be on a path somewhere, learning, growing, knowing, passing it on. His messages are as right and undistorted as a flower’s fragrance.

I don’t know either Bill Gaither or Karl Grossman, but I think of them together. They’re both tireless regulars in The Sun, and I always turn to their contributions eagerly. I imagine them with crinkles at the corners of their eyes. Their writing has the sly wisdom of knowing smiles. Karl seems the crazier, maybe because he works on Long Island, which isn’t as funny as New Jersey, but no different otherwise. Bill comes on like one of those big-time journalists (which he should be — he’s that good), with a moral edge to his clever sword. They both give me the feeling that, like all good journalists, they can always crank out something brilliant in a short time.

For the me that still feels real ailments failing to yield to pure intentions, the healing advice of Val Staples is a welcome relief. Every time that thinking my disease away gets me only as far as the bathroom, I can always depend on some smart antibiotic to do the trick. It’s refreshing to find out why this works on the physical plane. Now if I could only find out why they don’t serve drinks on the astral plane. . . .

Knowing what God made me for helps me understand Paul Smith’s monsters. I make monsters of my own, but none are quite so eloquent. Hell, mine don’t teach me a damn thing. They’re real dumb. Now this here Smith has some smart baddies. They sound like parts of God.

I hate to put Steven Ford Brown and Robert Volbrecht in the same sentence (like a judge passing on co-defendants), but time runs out and I’m at the back of the magazine. I like their stuff too. (Faint praise? No, faint skills on my part.) I LIKE THEIR STUFF TOO. (Is that better? It’ll have to do.) 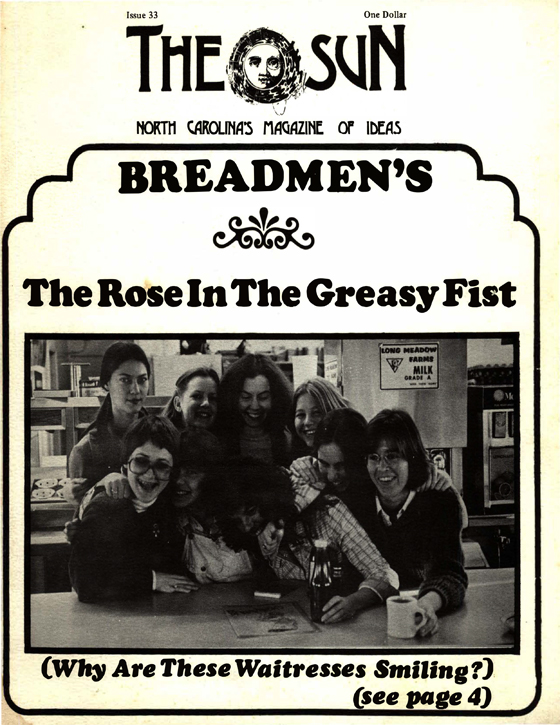