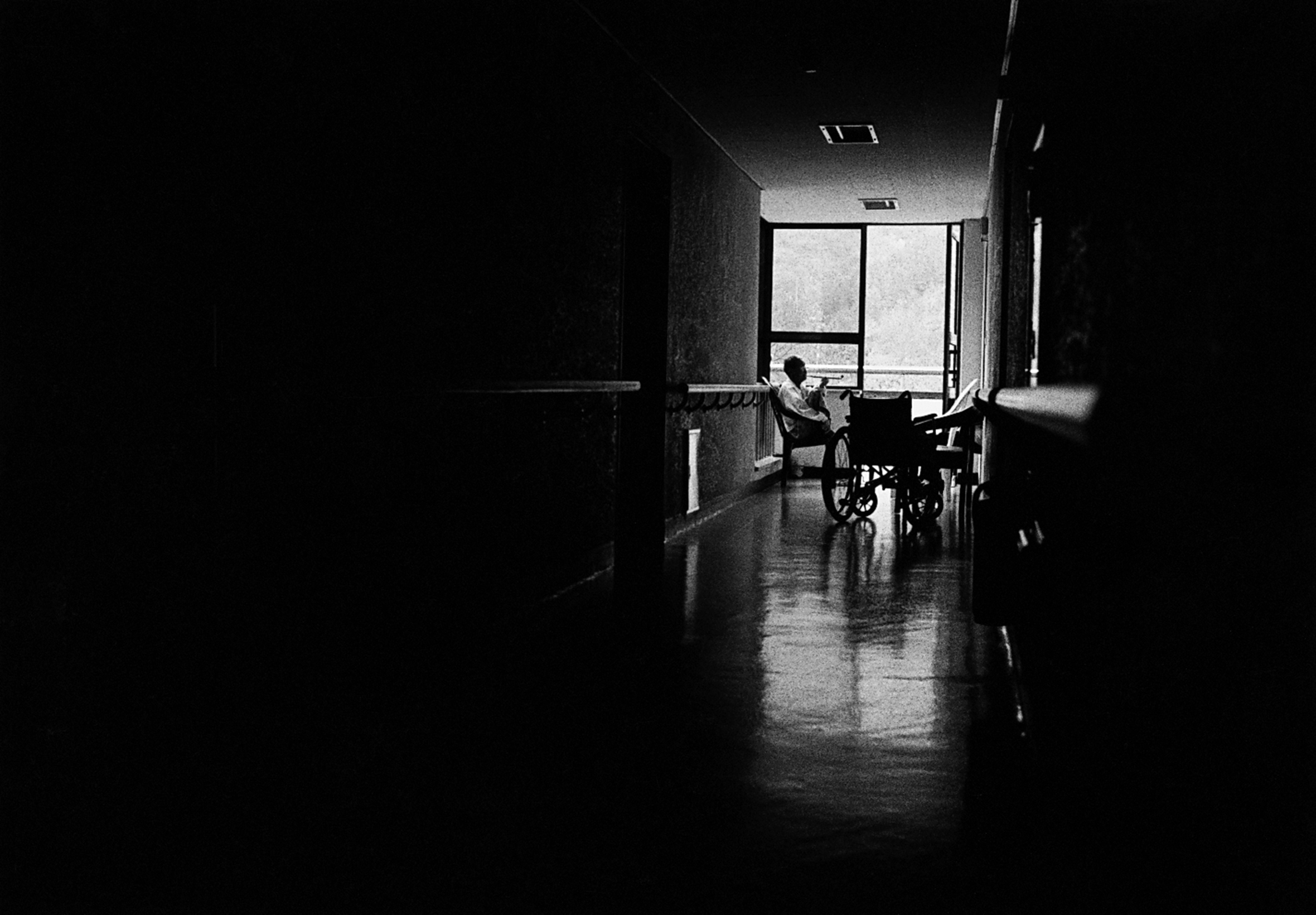 God In The Smoke Room

There is a remnant of cool left to him. It’s in the way he combs his gray hair back with a little wave at the top. It’s in his gold neck-chains and the way he lights his Camel straights: one-handed, with an ornate Zippo lighter. He has a distinctive, slightly sinister accent, a mix of South Boston and Brooklyn, acquired in the years he spent in the army.

He doesn’t even know the nurse’s name. But she knows his.

At the veteran’s hospital the nurses smoke where the patients smoke, in a little room near the front entrance. There are a couple of round tables, some molded plastic chairs, a coffee machine, a gummy deck of cards, a television bolted high up on the wall, a cribbage board, and a few tattered copies of Legion magazine. But no one plays cards or cribbage, and the television, usually tuned to the History Channel, seems to be there mostly for ambience, often serving up the familiar sounds of war.

What the men do is talk. They lay down their canes or pull up their wheelchairs, throw their packs of cigarettes on the table, and lean back in their seats. They snap open their Zippos, fire up their butts, and wait for the seminar to begin.

The nurse smokes, and because she is a psychiatric nurse, she often has to escort her patients to the smoke room and stay there with them. She’s learned to sit quietly, as if she were one of them. When they say “fuck,” they look at her with apologetic smiles at first, but she laughs and says she’s heard worse, and pretty soon they loosen up and forget she’s there.

Or perhaps they don’t forget she’s there. They know she works on the psych ward. They look at her big, wise face and know she knows how to hear them.

The one with the fading aura of cool — “Bronx,” the other vets call him — needs to talk. He needs to talk so bad it is straining to get out of him, like his belly against his green velour shirt. But it isn’t fat that pushes the fabric to the edge of the table. No, he is whipcord thin. It’s a tumor in his colon, and it’s getting bigger. He says he can almost feel it growing, like a child of sin. The doctors have been diddly fucking around (’scuse me) about doing surgery, because he has a bad heart and his carotid artery is blocked. His chances of getting up off the operating table are slim.

So, he says, death is stalking him, and it’s not going to be a clean kill. The bitch of it is that none of this mattered a few years ago, because he had 120 grand in his pocket (from a settlement for his broken back) and beaucoup babes; he had a little condo in Florida, an endless script for OxyContin, and all the rum he could drink.

But just about the time his liver quit, the money ran out, and he moved back up to Fartville (Berlin, New Hampshire, where the paper mills emit a stink like rotten eggs) to live with his son. Then he found out he had cancer, and now he’s here at the veteran’s hospital waiting for the doctors to make up their fucking minds (’scuse me), and his memories are starting to bug him. He’s got nothing to do but think, day after day, waiting for appointments, going to the canteen for meals, and sitting in the smoke room.

So he’s starting to wonder about God. The way Bronx sees it, he’s got to square himself with the Man, if he exists, and he doesn’t have much time. If God threw Adam and Eve out of Eden just for taking one little bite of an apple, what’s God going to do to him, Bronx, humping his sea bag of sin, so full it’s popping open, like that Vietnamese girl’s belly the night that cowboy captain decided they were going to pick her up in the middle of a firefight and get her to a MASH unit. He got a Bronze Star for that, so maybe it will weigh in his favor.

He’d been in-country only a week and was too green to say no when this cowboy comes into his bunker at night and tells him they’re gonna drive a jeep out of that compound and down to the village, where the VC are pounding the crap out of some stranded marines. Bronx grabs his M-16, and they jump in the jeep and roar out of the compound, past the spirals of razor wire and the claymore lawn ornaments, out onto that starlit road, where they cut their headlights and drive hell-for-leather through an area that everyone knows Charlie owns at night. Pretty soon they see tracers and hear bullets zinging past their ears. The captain asks Bronx if he’s ever been shot at, and he says no, and the captain laughs and tells him not to panic, just put the fucking pedal to the metal. This asshole captain is blessed because he isn’t afraid to die, and it seems like there isn’t a bullet in all of Nam that’s got his name on it.

So they get to the village, and the marines start shooting the shit out of them, because they don’t know who these freaks are driving around at night, and the captain yells at Bronx, “Start swearing, you motherfucker!” and Bronx lets go with a necklace of the best curses he’s ever strung together, and the marines laugh because they know Charlie can’t swear like a GI; ain’t no one can swear like a GI but a GI. And they let them into the village, past more razor wire, and point to this girl under a little bridge with her stomach torn open and her guts spilling out, and Bronx is so scared he runs over, grabs her, pulls her by the shoulders to the jeep, and throws her in the back seat, and they try to take off but they’re stuck in the mud, ’cause it’s wet down there, and Bronx has to wind the piss out of the engine till they finally get free, and by this time Charlie is almost up to their door. But he eats their rooster tail of mud, and they go like a raped ape back down this dark road with the lights off and get back to the compound, where the guys are waiting with the gate open, and the jeep flies through it barely touching the ground. This time Bronx picks the girl up in his arms, because he knows he needs to be more careful, and he remembers three things: that she looked at him; that her face was beautiful, delicate and perfect; and that she was bleeding so much her blood had clotted into heavy strings that hung from her like bungee cords.

Then the medics grabbed her, and he never saw her again.

Shit like this don’t bother you at first, but then you start to wonder. You wonder if you should see one of those shrinks. Does the nurse think they could help him? They’re all so young, and it seems like they don’t know doodly squat about how fucked up (’scuse me) the world is. How can they help him? They wouldn’t understand if he showed them the picture he has of himself with his first kill, his boot on the gook’s body and his gun on his hip, like the poor fuck (’scuse me) was a deer. But he could never really get into it, to tell you the honest-to-God truth, not like that sergeant they had. He can picture him like it was yesterday. Conaughey, that friggin’ psycho. He was so bad they had to transfer him out because some of the grunts wanted to frag him, especially after he wounded this woman who was walking along a streambed with some firewood on her shoulder, and then he went up to her and put his M-16 up her ass and pulled the trigger.

Sick shit, man. And it’s made him hate people, you know? Because he knows how awful they really are if you take away that thin veneer of civilization, that meaningless crap about apple pie and freedom. He thought it didn’t bother him, but it did, and the first kill he made wasn’t clean, either, ’cause it was a horseshoe ambush, see, and they had a claymore rigged on a trail, and they waited it seemed like forever till this gook came along real slow, looking here and there, and he looked right at the place where Bronx was hiding, and even though the gook couldn’t see him, it felt like he could, because Bronx could see his eyes, and what he saw hurt so bad he pressed the clicker twice, and the mine blew the gook’s legs off from the knees down, which wasn’t supposed to happen. He got the timing wrong, see. He should have waited a second longer.

Now all he does is wait while the doctors diddly fuck around about his heart. So he’s gonna tell them screw the heart; it’s no good anyway. All it does is thump and jump and keep him in this purgatory called the VA. He’s a chickenshit, and he’s going to tell the doctors he doesn’t care if he never makes it off the table, because falling asleep and not waking up isn’t a bad way to go. He should know, because he’s seen the bad ways, and he figures he’ll be getting off light. Unless there is a God, and he’s there at a desk like some fucking supply sergeant with a list in triplicate.

And right about then the nurse tells him that God isn’t like that. This nurse was probably a hippie with a peace sign. He can see it in her, ’cause she still has funky earrings and long hair, though the hair is graying now and pulled into a bun. Yeah, he can imagine her with a necklace that says LOVE, and the real bitch of it is they were probably right about that one little goddamn word being the be-all and end-all.

And she says, in her soft voice, that if you’re sorry in your heart (in your sorry, clogged-up heart), you are forgiven right then. No waiting.

And that if there is a God, he’s listening.

As an observer from both sides of the Veterans Administration system, I can say that seldom is a VA nurse sufficiently connected with her patients to come up with a story like Sybil Smith’s “God in the Smoke Room” [May 2004]. She writes with an uncanny empathy toward veterans. I honor and congratulate her.

Brad Burdin Heber, Arizona
More Letters
Thank You Your donations helped to keep our ad-free, nonprofit magazine in circulation last year, funding everything from production to distribution. Learn how you made a difference last year. Learn More 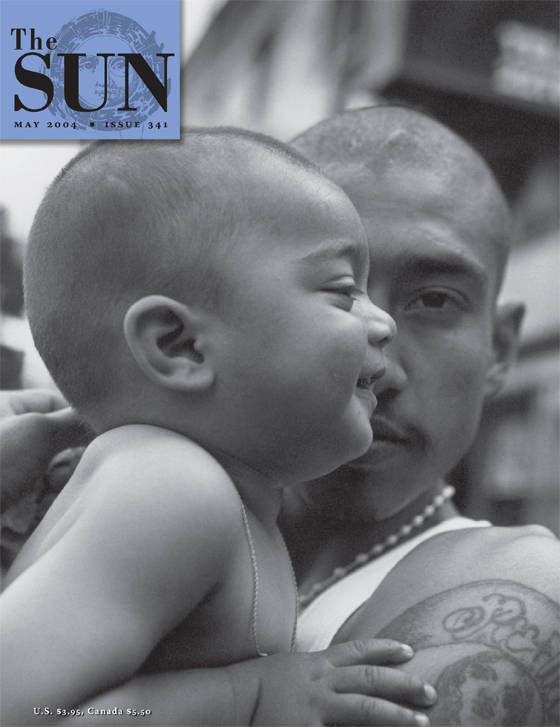 Robert Bly Talks With Michael Ventura About Art, Madness, And The Joy Of Loss