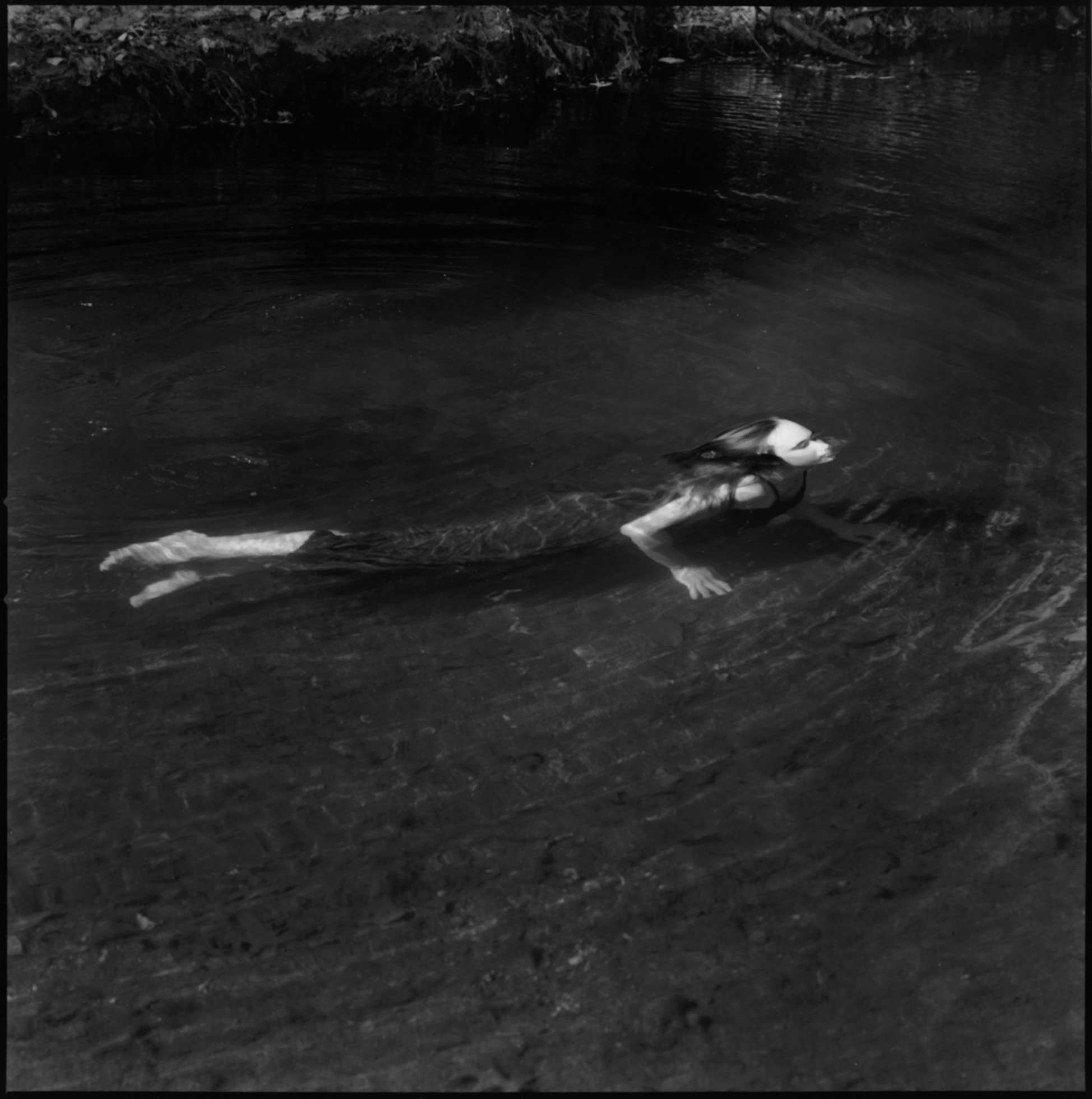 When I was seven, I had my hair cut short. I looked at my chopped hair in the mirror and was delighted: I didn’t recognize myself, and I was sure no one else would, either. Convinced my shyness had fallen to the floor along with my hair, I was hoping I could start the new school year as a different person, dazzling and popular. But when a classmate called me by name on the first day, I was disappointed.

By the time I left college and became a naturalist, I knew that change was slow and difficult. At thirty I felt stuck, as if my life had stiffened around me, and for some reason, perhaps unconscious at the time, I began to get interested in insect metamorphosis.

I’d read that it was easy to see stoneflies metamorphose. California creeks swarm with them; fish eat them all the time. They start life as brown wingless creatures, bumbling along underwater and hiding under rocks. After about a year in the water, they climb onto a rock or a log and transform into adults with wings. I’d never seen this happen, and I wanted to.

And so, early one spring, I began waiting. Every night for weeks I sat down by a stream in the Gabilan Mountains and watched the rocks. Nothing happened. The stoneflies were there, for every time I picked up a rock, they clambered wetly away, but it seemed they weren’t ready to change.

Then one night I noticed a dried shell, still so perfectly jointed that I could flex and unflex it like a tiny, papery accordion. A stonefly had left this wrenched-off husk behind and tottered off into the air.

Soon I began seeing discarded exoskeletons everywhere. These split-open remains looked peculiar; ringed round a rock, hunched over, they seemed to be prostrating themselves to some strange god. One night I counted a stack of three: a still-damp heap of ghosts. I found six on a willow leaning into the water; they clutched at the bark as if they were alive, not merely shed skins. Each leg was spurred, each detail perfect.

I couldn’t stop thinking about how those stoneflies, driven by an inner urge, left behind the familiar rushing water to climb inch by inch up this dry, mottled branch. I wondered how they knew when to stop, when to open. I wondered what would happen to those carcasses, clinging to the willow night after night, month after month, while the moon shone down on their stiffened, useless forms. I picked one off the trunk, and it blew away, tumbling in the wind. More than ever I wanted to see the process that seemed to be taking place all around me. But I had no luck. And I realized that it was luck I would need, more than patience, to see that rapid transformation. If it came to me at all, it would come as a kind of gift.

Several years later I had almost forgotten about stoneflies. It had been a bad year, a year of losses. My father had died of a heart attack in a strange hotel; my grandmother had died at home of a stroke. One evening I noticed a man in the supermarket who resembled my father from behind — he even passed his hand over his head in the same distracted manner. When he turned around, he was a stranger with an ugly tie who had no idea why I was standing behind him, my hands full of cabbages, crying.

My grandmother had called me before she’d died. The lease had expired on her apartment, and my sister was helping her move. There was something in my grandmother’s usually robust tone that should have alerted me: her voice trailed off, as if she were concentrating on some faint object she alone could see.

My sister told me later what happened after they’d finished packing: Our grandmother’s apartment had been stripped. Most of her furniture was gone. The windows were bare; the curtains, with their bold pattern of chrysanthemums, stored away. She’d had the telephone disconnected (after giving the telephone company a piece of her mind, something she had always wanted to do). She’d hired the O’Connell brothers to haul off her massive sofa. And she’d put the last of her belongings — her tortoiseshell combs, the musty sepia photographs of her husband, and all her silver monogrammed pillboxes — into a trunk. Then she locked it and sat down on top, breathing hard.

At that moment, my sister said, a wind blew into the apartment from one of the bare windows, lifting my grandmother’s dress so that it billowed about her knees, and as she was smoothing it down, talking and laughing, she had a stroke and fell off the trunk. Four hours later she was dead.

“It’s a grand life if you don’t weaken!” she used to say. I think she had decided she was too old to change, and preferred dying to moving.

All these things had plunged me into an uneasy truce with my life. The only place I felt at all happy was in the wilderness, so I spent as much time as I could hiking, touching the bark of trees, and watching clouds of gnats rise in the evening.

One afternoon, after trudging through miles of chaparral, I stopped to take a drink from my canteen and looked across the valley. In the sky were shoals of cirrus clouds, long and skinny like fish bones, all blowing and melting to nothing. Digger pines leaned out of the hill, and scrub jays flew into their branches.

It was later than I had thought, for the shadows were getting longer and longer. I turned back toward camp. Suddenly a gray fox broke out of the brush in front of me, so close that I nearly jumped: I watched him bolt into a clump of chamise, his long tail floating behind him. Then he barked. It was a harsh sound like a cough, but it triggered some brief moment of insight. As he stood and watched me, I knew I had to change everything: who I worked for, where I lived, what I did. It was not as if I’d had no warning. For years, I think, one part of my mind had been signaling to another, but I’d been ignoring it. It had taken two deaths and the bark of a fox to make me pay attention.

But now that I realized how much I wanted to change, I felt stymied, and a new direction seemed risky and hard. I sat down beside an arroyo, where there were still a few trickles of water, and found myself staring at a moist yellow creature rocking back and forth on a stone. The insect was about as long as my thumbnail and was struggling so passionately that at first I thought it was held fast by some predator: a beetle, perhaps, or a small frog. I crouched closer and realized I was looking at a stonefly.

Patiently, rhythmically, the adult seesawed back and forth until it began to emerge from its old skin. Except for the change from brown to yellow, the stonefly seemed much the same, but on its back were two bluish balls that stuck out like tiny bundles of crumpled laundry. Looking closer, I saw they were wings riddled with creases, and I suddenly felt worried. I was sure the insect was deformed and would soon die.

As if to prove me wrong, the stonefly made one final effort, rose out of its shell, and stepped delicately to one side. Soon it pumped fluid into those wrinkled bundles, smoothed them into stiff, flattened wings, and folded them across its back. In a kind of torpor it waited beside the useless husk that had once been its body.

Oddly, touchingly, it reached over to its old shed skin, still perfect except for the split down the center, and began stroking it all over with its antennae, as if in some kind of farewell. Then it made its way back toward the stream, stopped, and stood facing the water where it had spent so many months. I began to feel afraid for it again: it looked so flimsy.

As if in response to an inner signal, it dashed to the top of the rock, lifted its wings, and fluttered off. Drifting into a weak patch of evening sun, the stonefly seemed to catch fire: for a few seconds I watched with longing as it flared in front of me like a living spark. Then it wobbled off into the shade, and out of sight. 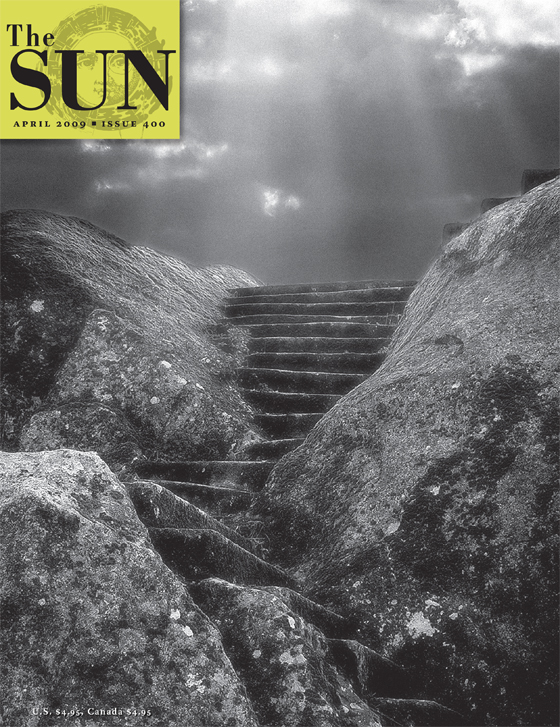 excerpted from
Every Eye Beholds You

By Meg Kearney
The Sun Interview