After long days and nights, after asking and following the advice of many strangers, our hero of medieval aspect and suitcase indestructible beheld from a hill his journey’s end, the village of Balladeer Ed.

The famous Balladeer Ed, singer of the seasons and the motions of the earth. He wasn’t much to look at until he sang. Righteously rageful, full blown wailing, when he sang he whined like a hurricane. He played piano like a jackhammer jacking; and the piano roared with joy! Machine fleshed wonder, Balladeer Ed, praised around the world, was otherwise pretty dull because he sang and played but he never talked. Everyone else talked for him.

He got tired of that, went back home, built a saloon, and turned into a piano. No one knew how, but many wanted to know. Others only wanted to listen — our hero, for instance, of medieval aspect and modern curiosity. As he entered the square of the village, the villagers came from their houses and shapes, and circled around him. Our hero sensed danger as one of them spoke.

“We know what you’re after, intruder: Balladeer Ed, the piano human. There’s a thousand others like you, unholy probers, all hungry for the secret. We’ve made dirt of them all.”

Our hero swallowed his fear and spoke to the circle of faces. “Hold on! I’ve only come to hear him play, the famous Balladeer Ed.” Then he learned from a one-eyed man who leaned on a cane made of bone, Balladeer Ed had burned to ashes the night his saloon burned down. “Then I’ll leave if I may,” said our hero with medieval resignation. “I’ll head on up the valley and take the train back to the plains.” The innocence of his intentions shone through to the village people. They knew exploiters. Of late they’d seen many, and many fresh graves encircled the village, unmarked but for the grassless earth. The villagers conferred with glances, then mumbles. Then a leader spoke.

And quickly, gladly, our hero departed through the other side of the village, crossing a long, green field, climbing a hill, and onward. After long hours walking he came to a hill which was higher than those around it. He knew his way was long, but he was glad to be alive, though saddened that he would never hear the music of Balladeer Ed. He camped beneath a tree upon the hill, and the night shone brightly with all its stars blazing as he lay on his blanket and slept.

And soon a dream came to him, a vision of Balladeer Ed; a blanging piano, it sounded clumsy as it first began to play; and as it played, it spoke: “From the very first moment I became a piano, and began my career in Murphy’s Saloon, the rowdies loved me, the tight asses loved me, and so my song was confident and pure. I was inspired. Even the beer and cigarette stains on my beautiful finish inspired me. I played myself. And no man could have possibly played me any better. And I never played the same song twice. Yet, it was all the same song. The people knew this and danced, drank, and laughed; and got up every day and went to work.

“So I would spend my days in solitude, feeling the sun shine through the few windows of the building, the little bit of dust, or the grey whiteness of rain and snow. A silent piano in the middle of the floor, I thought things were fine; and I must admit, they were, until a stranger came in one night, and right away I felt his curiosity like a blazing torch. And worse, I heard his mind. ‘How the devil does this happen? No rolls? No player piano? If . . . If?’ He pondered my playing every night that followed. His presence made me confused; not enough to play poorly, but enough to lose myself on his questions. How did I do it? Why could I never talk? I began to take a distance from my noise.”

At this moment our hero interrupted. “Why do they call you Balladeer Ed if you’re a piano that has no voice? And how are you talking to me?”

“Listen,” said Balladeer Ed. “Far off, do you hear?” And suddenly a rhapsody struck forth from the black night, turning the stars to flags and twirling, exploding dragons of gentleness. Our hero of medieval aspect opened his eyes and looked into the branches of the tree above him. There he saw many things. He saw the seasons come and go, saw flowers and snow and the brown, collapsing, reeling of Autumn, punctuated by the various hoppings and sleepings of birds and wooly creatures, squirrels and black/yellow caterpillars. He saw a young boy climb up in the branches, and sing a song concerning his love for a girl, and her beauty. He saw a woman walk gracefully into a snow-covered sunset; but this was really the tree clothed in long strands of ice; or was it? Our hero remembered it was Summer.

The dark night peeled back like a skin, and the glowing apparition of Balladeer Ed, a shining piano, floated in the air above our hero in medieval dream/trance.

“Not exactly a tale,” said the apparition. “But I’ve shown you what you wanted to see. The same with the people in the village. I showed them stories of the things that dwelt inside them, their demons and loves.”

“But the stranger,” asked our hero.

“Yes, the stranger,” said Balladeer Ed. “It was a bright day in Spring. Somehow he entered the saloon, sat down, and played me. I began to tremble with his music, formal and set, aloof. He left, but I couldn’t calm down. I began to smoulder. That night I played poorly. The people were sluggish. The songs no longer touched them. Deep in the dark, when everyone was sleeping, I exploded. It’s as simple as that. Like a woman debased, I couldn’t live with myself. And it happened so quickly. The moment his hands touched my keys, I knew it was all over.”

“And the people of the village, they know this?”

“Yes, I played the same song for them as they lay sleeping that night.”

“So you’ll never go back. Because you can’t. And so you’ll know.”

“So I know. And so I’ve heard your music which I must admit is tricky.”

The piano laughed as our hero fell deeper into sleep. As he slept he walked through the streets of his own town many miles away. As he walked he thought of Balladeer Ed and the people of the village. He felt a great sadness for the villagers: to lose such a thing as Balladeer Ed. No wonder they hated strangers. As he walked and thought, he passed the graveyard. The child-ghosts of many born and died since his leaving played games among the tombstones. Their laughter struck him as strangely happy.

When our hero awoke, the sun was up, but the sky was grey. He picked up his blanket, packed up his suitcase, and started walking, In a short time he came to another hill like the one he had spent the night on. From this hill he could see, off in the distance, a long train pulled by four locomotives. He couldn’t catch that one, but he could wait by the tracks in the valley until another one came along.

Our hero walked with new strength as he descended the hill to the valley, the song of Balladeer Ed playing over and over in his head. 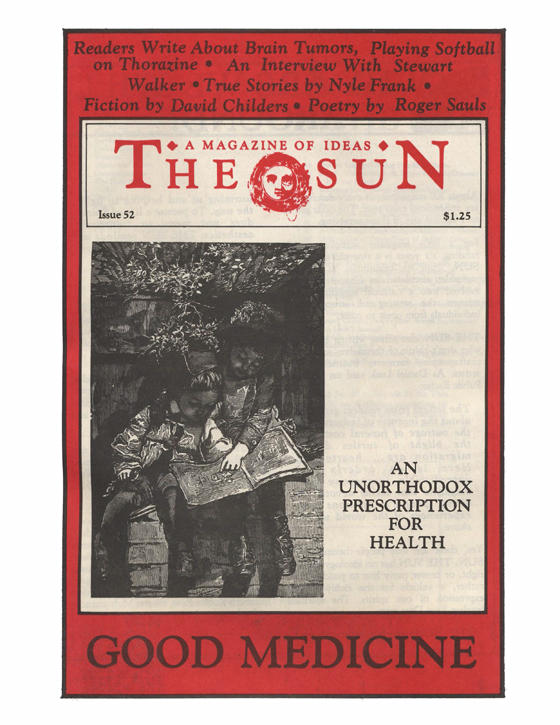