An Elegy For Jesse Stroud

There is no precipitating event for this elegy. No anniversary. No birthday. No cause whatever, other than personal need. Jesse Stroud lived, struggled, and died. I do not purposefully vilify nor vindicate. Neither do I celebrate. Certainly not regret.

I met him on a warm Saturday morning in May. The richly shaded side street was tranquil and languid. It was prime scenery for a young photographer anxious for a subject with “character.”

He was rocking slowly on his porch.

“Excuse me,” I asked from the street, “but would you mind if I took your picture?”

“Whatsa? No, not at all,” he called in a surprisingly strong voice. “Come on up.”

Brimming with geniality, I walked up the shoddily constructed though well-kept brick path which led to his door. Despite the cockeyed angle of the bricks, there was not a weed to be seen, nor blade of grass interrupting the bricks’ cozy chaos.

“Nice place you’ve got here.” I said, halting on the first porch-step.

“Naw, really. Rats?” I went on enthusiastically while unholstering my camera. This was my chance, honest-to God local color.

“Sure,” I laughed, dropping my lenscap. “My mother used to call us kids her little yard rats.”

“Troubles me, telling them apart.”

“Suppose most people like them.” The old black man allowed a thin stream of blue smoke to escape from his thick lips. He stood, and opened the whitewashed screen door. “Didn’t spend a heap of time being one myself.” He stepped into the old house.

I replaced my lens cap reluctantly, and followed him in. Maybe I could return tomorrow with a flash. Inside, he offered me wine, beer, or whiskey. I declined, but welcomed a tour of the house.

On one wall was a picture of his football team in college. Leather helmets. Baggy pants. No numbers. He was proud that he had once played football in college. He asked me if I could tell that he was once very strong. I answered yes, I could.

The old man eyed me carefully and said, “Boy, don’t be so damned polite. You got to learn to speak your mind. If God had intended for the world to turn as smooth as a baby’s butt he’d of made everyone like me,” he grinned broadly, “or you. But, as it is, I gotta elbow my way into people, let ’em know what’s what. And I’ll bet you a hole in a donut to a quart of swamp water that none of ’em thinks I’m polite, but none of ’em gives a damn either.

That was five years ago.

There are winos living in his home now. A “condemned” sign is posted above a worn-out rocking chair on the front porch, and broken windows overlook a wildly overgrown lawn. Across the street, rock-and-roll drones out of a pre-fab duplex. This house, once proudly and desperately possessed, has fallen into decay.

Inside, the squalor of the present inhabitants is jumbled together with the old man’s personal effects. Papers, clothes and cigar boxes are strewn carelessly about. The stale air is bitter with mold and mildew. Dust is everywhere. It covers copies of The Watchtower and Reader’s Digest piled on the floor next to mattresses. Issues of Sports Illustrated and Ebony are found in every room.

Stacked near a bookcase, in the corner of the living room, lie several portraits of Martin Luther King, John and Robert Kennedy, and one of a beaming Dean Smith, UNC’s basketball coach, arm in arm with his prodigy, Charlie Scott. The only portrait left hanging is one of former North Carolina Governor Terry Sanford with the inscription, “To my friend Jesse Stroud. Best Wishes, Terry Sanford.”

The bookcase contains books on medicine, physiology and conversational French. There are novels by Caldwell, DuMaurier, Michener and Haley. On top of the bookcase is a Nurica cigar box crammed with newspaper clippings by Sidney Harris, Harold Warren and Ann Landers. To the right of the bookcase, on the windowsill, lies a bottle of Richards’ Wild Irish Rose wine. Next to the bottle is a complimentary scenic wall hanging from the Chapel Hill Funeral Home; the frame has a thermometer fastened to it.

It was a hot day in July 1977 when Jesse Stroud died of a stroke in the Pine Ridge Nursing Home. He was in bad shape. Jesse was an alcoholic and asthmatic and he suffered from diabetes and ulcers. Despite these ailments, he smoked cigars heavily and fed himself on Rebel Yell and Baby Ruths. He tried to convince me that these were his only vices and that if they killed him, so be it. Well, they weren’t and they did.

You could hear Jesse’s brand of straightforward indiscretion every day at Jeff’s Campus Confectionary. Jesse would take his asthma and cigar to the dime store and assail all comers with impunity. Upon making a point Jesse would lick a bit of tobacco from his lips, hawk and spit, then sit back cooly, a small cloud of smoke crowning his shining bald head.

“Yeah, Jesse was a regular,” said proprietor Jim Mousmoules. “He would come in with a bad cough and buy his Nuricas. Always the same.”

Jesse was born in Chapel Hill in 1910. He was a football star at Lincoln High School and at North Carolina College (now the four-year N.C. Central). In the mid-1930’s he was a waiter at a U.N.C. fraternity house and, in the Forties, he was a janitor at Camp Sequoya. There, he met George Coxhead and Jacob James, both of whom became his lifelong friends. Besides these, Jesse had few loyal friends. He remained single, taking care of his mother, if not himself.

Simply, Jesse was a frustrated politician. He spent most of his life employed as a porter at the Carolina Inn. It was there that he came by his argumentative talents. As a porter he knew influential state dignitaries: governors, senators, mayors, who came to visit the university. His gregarious personality won him the friendship of Terry Sanford, U.S. Senator Sam Ervin, and U.N.C. President William Friday, for which he paid them amply with admiration and service. According to George Coxhead, “Jesse was a talker, and when anyone would invite him to stay for a drink he wouldn’t say no. He could hold up his end of a conversation more than most black men of his generation. He had the education to verbalize his feelings on civil rights, and he did — often.”

Not only did the politicians challenge Jesse on the issues, but they also inspired him to write letters to the editors of the Anvil and the old Chapel Hill Weekly. He desperately wanted to be heard, alongside those he admired. However, Jesse’s views often got him in trouble; his letters were bitter attacks on bigotry, social injustice and double standards, particularly as they existed in the church. “Jesse was a man of conviction,” said Coxhead, “but his caustic, reckless letters angered blacks as well as whites.”

He infuriated much of the black community with a letter concerning the death of Martin Luther King. It read; “We so-called Christian Negroes had not taken a firm enough stand for Christ, for if we had, our minds would have led us to support Dr. King far better than we did. This lack of support makes us guilty of his death too.”

Subsequently, one minister dubbed him a “liberal radical” for his searing attacks on the hypocrisy of the organized church. Jesse claimed that “one of the great threats to America lies in the churches which condone ‘immorality’ in the form of racial bigotry.”

In response to the controversy he had stirred, Jesse wrote the following poem which appeared in the Anvil.

The editor of the old Chapel Hill Weekly, James Shumaker, found Jesse to be a constant irritant. “He was always coming to my office with some problem or other. He’d pull out one of his letters, and he wouldn’t leave until he had read every damn line of it to me.” His neighbor, Mrs. Ike Thomas, said that “he was a fine neighbor until he got on that civil rights kick, then he became ornery.” However, Jesse had little fear of what his neighbors, or anyone else, thought of him. In the same letter to the Chapel Hill Weekly Jesse simultaneously claimed that the Board of Aldermen were his friends and that “the citizens of Chapel Hill have a right to file suit against the Board for malfeasance of office; they are guilty of the sufferings of the Negro ghettoes of Chapel Hill.”

Above all, Jesse was stubborn, particularly regarding his home where his mother had lived and where he had spent most of his life. He owned his house on Church Street and he was proud of it. Once Coxhead offered to build a duplex in place of the house, which was aging beyond repair. Jesse tentatively agreed. He would pay Coxhead back by renting out one half of the duplex. “A week before final arrangements were to be made Jesse called me. He said that he couldn’t do it, that there were too many memories.”

Some disregarded his abrupt manner. William Friday said that “Jesse was one of the most warm-hearted people I have met in my life. He had an uncanny ability to draw people out. Of course, after that he would find some issue to base a lively argument on.”

An old drinking buddy, Jacob James, is indebted to Jesse for teaching him to read. He said, “As far as I remember, Jesse never raised a sensation, he was a kindly man. Seems to me everybody took him the wrong way. They just left him alone. You know, when a man gets down, sick and poor, people just don’t want to be around him.”

Disillusioned, lonely and ill, Jesse fought being placed in a nursing home. He would have liked to have died in his home, to have smoked one last cigar on his porch. A year before he died, he left Church Street to enter a home. He was unable to care for himself, and had been largely abandoned by family and friends.

Jesse once wrote, “I am looking forward to great things for my race and myself. Three passions, simple, but overwhelming, have given me life: the longing for love, the search for knowledge, and an unbearable pity for the sufferings of mankind.”

Next to the bookcase on the floor is a letter. It is addressed to Jesse. “Although I have met many people, Mr. Stroud, and many people have made a great impression on me, you hold a singular spot. I will miss seeing you on your porch. I think of you often. Keep up the good fight. If it were in my power I would give you the world, and a Cadillac to boot, but as it is, we’ll both be walking.”

Author’s note: Since this piece was written, Jesse’s house on Church Street has been demolished. All that remains is an empty lot and three venerable oak trees which he planted. 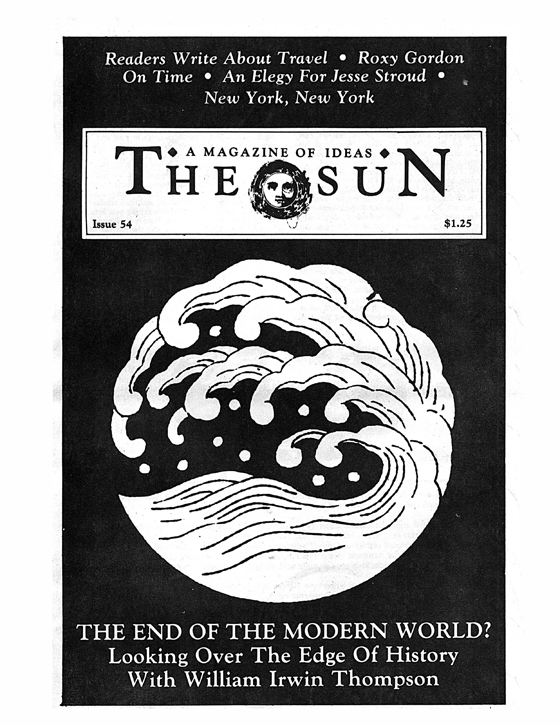