If I knew what sex is, I’d be preaching it right now to global audiences. Unfortunately, I don’t.

I could give you the accepted definitions. The humanistic: it’s the most beautiful and profound and open expression of human love. The sociobiological: sex is the means to perpetuate the species. The spiritual: sex is an approximation of the Ultimate Union with the One. The political: sex is a power play between two or more individuals. The “moral”: if sex feels good, it’s bad. The existentialist: sex is a conscious choice. The Heideggerian: sex is Being Becoming Nothingness. The commonsensical: sex is fun.

I tend to agree with the commonsensical. But, I feel sex is a word. SEX is something else altogether: Ahs and oohs. And . . .

Sex is. . . . Sex is . . . For some, it’s the cherry-on-top, the first prize; for others, it’s the spider’s web, the hangman’s noose. The murky juices of the Amazon? Or the primordial past come back? Or even the Glory and the Redemption?

For me, it’s been mostly something which I haven’t gotten a whole lot of. In fact, except for limited periods of sexual relations sprinkled here and there, most of my life has been one long trot on the celibate trail. I’m not an authority in any way.

There doesn’t seem to be any definitive purpose behind the searching out of sex. Reproduction, maybe. Pleasure, possibly. It’s just something that people do now and then. But there are always so many people telling you how to do it and how many times of it is good for you and all of the different ways of doing it. The rules in society easily make a mocking lie out of Sex. The lies are held and perpetuated through the sexes — men lying in order to get it; women lying about its results once they do get it. Others just lie about how much they’ve had of it or how much they want to get of it or how much they liked it when they did get it. The point is to get as much of it as you can and to make sure that others know you’re getting more of it than they ever possibly could. Sex inspires deceit. Sex can be a tool for hurting others, hurting ourselves. Sex is both a liar and a healer in one. It’s a way of concealing and a way of touching.

One thing’s for sure — Sex is the Big Mover, the Secret Deceiver, the Great It of all the ages. The It that men fight for, the It women have suffered for. It’s the universal twitch between wet thigh and hungry scrotum where molecules end up square-dancing and finally fighting their way upstream toward creation.

Now there’s a good question. Sometimes I feel it’s everything. It can be so difficult to be anything but a male person, having male viewpoints, being interested in chauvinistic values, just never quite being able to be “one of the girls.” So much of my world is formed in the minds and hearts of sexually-oriented endocrine and nervous systems of well over half of my companions on this well-populated voyage. Sometimes I truly treasure the personal or impersonal, non- or asexual events with people which come along. And at the same time I really feel that sex is just about the most fun thing I know about, or know a little about. It is rather hard to get much information about it. There are so many excuses for using sexual contact of one kind or another to get me to do something, which means we can’t really talk about just what’s going on here, that I really don’t know much about what kind of entertainments might be possible with some co-operative exploration.

And I continue to feel that sex is rather some kind of magic glue which holds our attention to the real task at hand, that getting together we’re all working toward. And while matters of the heart are beautiful, wonderful, comforting, the kind of interest generated by sexual matters is just so powerfully involving, almost as if someone had the personal essence by the scruff of its neck, and were shaking it out from all its extraneous jetsam.

Somehow we (I) must remember that even this often bewilderingly vigorous house-cleaning is just a very powerful form of fun. Perhaps it is true that sex is all in the mind after all; good thing that isn’t the only place we experience it, or we’d just be floating off, leaving these beautiful structures in which we wander about to fend for themselves. So I suppose sex is a survival mechanism invented by bodies for their security in periodic inhabitation. Sometimes that mechanism overdoes it a bit. A balance is needed, I suppose.

Sex is emotional, mental, spiritual and physical, not necessarily in that order. It is passionate, boring, selfish, giving, exhausting, invigorating, violent and tender, not usually all at the same time, but surprisingly it can be all of these things during one encounter! I recall one encounter that lasted for four days, however, so perhaps that accounts for the phenomenon.

The best sex I remember (it’s hard to say “best”; I’ve had many “bests,” all different) seemed to take leave of the physical altogether. My partner and I became one swirling mass of essence whirling in and around and through each other. We shouted together in joy although neither one of us actually verbalized a thing. I can’t say what our bodies were doing at the time. It didn’t matter.

Another “best” is the pure animal lunging and grunting that brings on a smacking orgasm. What relief! What fun! That kind of sex can be termed mutual selfishness, each partner moving to please themselves and happily, pleasing the other at the same time. The panting relief that is shared after such an encounter is often the best part, when you curl up together sticky with sweat, your chests heaving and nostrils flaring, all rosy and pink — so pleased with each other, each having been well used.

The worst sex I can think of is when the selfishness is not mutual. I have been in situations where I felt like consulting my watch as Jane Fonda’s character did in the movie “Klute,” to see how long it was likely to take. At such times the friction generated by my partner (partner? the word implies cooperation but I can think of no other) has often become very uncomfortable and I have felt that a good squat on the john would have been much more satisfying. I try to avoid such situations and the people who are likely to lead me into them.

Sex is different for different people at different times. No two people can have the same experience twice due to the myriad factors (mental, emotional, physical and spiritual) that affect each encounter.

If there is any universal factor in sex it is communication. Sex always communicates something, whether positive or negative. At the worst it communicates hate, lust, anger, or guilt. It can be superficial and lonely. At the best, sex can unite two people in joy and love.

My own experience has changed radically over the years. It has brought me from sex for the fun of it, through sex to alleviate loneliness, to sex for showing love. My search for truth and meaning has revealed levels in sexual experience I never imagined could exist when I was younger. On the deepest levels, sex becomes a touching of souls, a communion with universal forces, a loving dance of ecstasy, an intimate and honest connecting of spiritual beings.

To me the whole world is sex. Because sex is life. Sex is breathing, sex is smiling. Sex is joy, giving and showing your body and smile to the world. It is union. It is also dark, imaginative and fantasy.

Sex makes the world go ’round. And it’s what keeps us from our sense of isolation and despair at being alone. We are burning objects in the world of delights, a living organism living in a greater organism, encountering active explosions followed by peace, sleep and one day Death.

“Sex is” laying naked on your right side with your belly pushed tight next to his back, your legs following the contour of his legs, your arm around him, your hand on his chest. Be it hot or warm — whether it “go on from there or not” — that is sex. Sizzle!

I really began to learn what sex was at 10:45 on Mondays, Wednesdays and Fridays about seven years ago.

Of course I knew about sex before then. Twenty years of marriage to a man I love, and three children, took care of that. Before my marriage my mother had simply told me, “It’s beautiful.” But “it” was never described.

Seven years ago, however, I began leading a high school course called Human Sexuality. I asked students, “What is sex?” Their answers have enriched my awareness:

“Sex is lying in a sunny place in a piney wood, holding hands, and knowing you don’t have to go home yet.”

“Sex is discovering I love a guy like other guys love girls.”

“Sex is like using my computer. If I program a girl right, I get what I want.”

“Sex is the feeling you get for a guy who says he loves you when you’re fat and have pimples.”

“Sex is what your mom’s always looking for when she dates different guys.”

“Sex is like playing Pac-Man. I never have enough quarters to win.”

“Sex is more fun than anything else.”

“Sex is jacking off in the shower and wondering if I’ll ever have a girlfriend.”

“Sex is being totally close to someone even when you’re not touching.”

“Sex is part of the feeling you have when you go to a NOW meeting.”

“Sex is what I think about most of the time.”

“Sex is wanting my Dad to hug me and not daring to ask him.”

“Sex is a great way to get what you want.”

“Sex is a way to pretend you’re not lonely.”

“Sex is what you think you’re the only one in the world feeling this way about and finding out you’re not.”

“Sex is trusting someone with your whole self.”

What is sex? I’m still not sure, but I’m a lot surer than I used to be.

It is only through the merging of the two total beings that the couple can relish the most joyous and splendid of human experiences. To accept less is a cheap-shot at oneself, an act of self-hatred. Sex without sacrament smacks of Western man’s propensity to settle for such an empty existence. Why do we content ourselves with so little?

Many years ago I met a very distinguished lady from England. After awhile the conversation turned to the naming of British counties. “You’ve got Essex, Sussex, Wessex, Middlesex,” I said. “But just what is this sex?”

“Ah, my dear,” she replied, “that you’ll have to find out for yourself!”

More From This Contributor
What Do You Think? We love getting letters to the editor for our Correspondence section.
Has something we published moved you? Fired you up? Did we miss the mark? Send A Letter 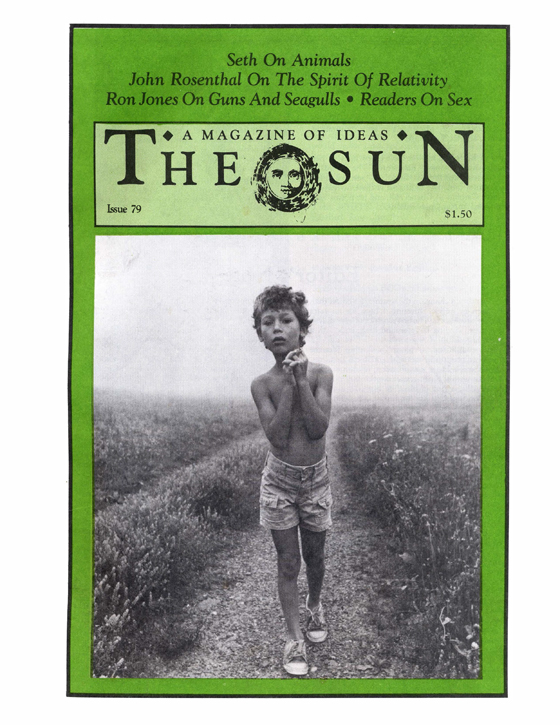 The White Horse: Seth On Animals

At The End Of The Fiscal Year