I’m writing about three off-the-wall references to Bhagwan Shree Rajneesh in Issues 96 and 97 of THE SUN. In his article, “Pernicious Oneness in Spiritual Thinking and Practice,” Steven Hendlin both falsifies a fundamental tenet of Rajneeshism and ignores well-known foundational work in his own field — the integration of Western psychology and Eastern meditation. Hendlin puts Bhagwan among those who say that “thought itself [is of] little value.” I’ve been a disciple for nearly ten years, and that’s news to me! Here at Rajneeshpuram we’re putting the final touches on Rajneesh Mandir, a giant hall for meditation and satsang — silent communion with the Master. A mandir is a temple designed for transcending the mind through the mind, which, as Bhagwan has often said, is the only way to do it. Bhagwan has always taught us to use our minds, to use them with diligence and awareness, but always to avoid being used by them — an important distinction. Hendlin somehow manages to avoid any discussion of the ground-breaking work by Rajneesh therapists under Bhagwan’s guidance in the synthesis of psychotherapy East and West. This synthesis has been reported in detail in therapy journals; it is available through courses and programs here and in many places, including Laguna Beach, where Hendlin has his practice. Why the blind spot?

And speaking of blind spots, what a shame when one of our best poets distorts a Master’s basic teaching as utterly as Robert Bly does in the interview, “Going Against the Dragon.” Bhagwan has honored Bly by using his translations of Kabir for Bhagwan’s series of discourses on this great mystic. And yet, Bly has apparently failed to read a single book by Bhagwan all the way through with attention. Otherwise, he could not lump Bhagwan with the Maharishi as one who recommends “skipping over pain and suffering.” Bhagwan teaches that no one who seeks the ultimate can avoid suffering; rather, he tells us to go into it consciously, gracefully, and gratefully, but without developing a Judeo-Christian “pain is gain” fixation on the negative. Bly’s false generalization shows me that he just does not want to come to terms with what Bhagwan is saying.

Bo Lozoff, in his letter in Issue 97, gets off a gratuitous cheap shot at “Rajneesh with his opulence and arrogance.” Is Bo perchance carrying around that rotten old Gandhian idea of poverty as virtue, and have we Rajneeshees pushed his button? Would Bo recognize a living enlightened Master if he had the great good fortune to be bitten on the leg by one — or would he call the Master “arrogant” and go back to worshipping his monkey-god? No matter. We here at Rajneeshpuram have gotten used to this sort of thing. Whether it comes from rednecks or so-called “spiritual” types, it’s nothing but bigotry.

Indirectly related, Sy, is your remark in your editorial in Issue 97 about those who “make their flesh-and-blood guru a god.” This is a frequent theme with you. I would hope that by now you’d seen that no genuine Master, from Lao Tzu to Ko-Hsuan, from Buddha to Gurdjieff, ever allows his disciples to fall into this fatal mistake. “Don’t cling to my finger,” Bhagwan always tells us; “look where I’m pointing!” The Master enters your life as a great shock, a great awakening. He is just the opposite of the priests and politicians who encourage garbagey dependence and security-seeking. His message is always total independence, total individuality, total freedom.

Thanks again for everything THE SUN is.

At the risk of dragging out this correspondence past its being productive, there’s just one point that I feel compelled to make in response to Steven Hendlin’s response to my response.

What Hendlin refers to as “real” about the ego structure and so forth, is only real to psychology; that’s all I was trying to say in the first place. There have been countless saints — spiritually pure people — who would have been considered awful messes in terms of “pre-egoic-egoic-transegoic” standards. Ramakrishna finally gained his emergence into the Divine Mother as he held a knife to his throat threatening to kill himself if She didn’t appear to him. Gautama sat under the Bodhi tree resolving never to move again unless he gained enlightenment. Neem Karoli Baba spent twelve years walking along the Ganga River refusing to talk or to raise his arms; he only ate when people actually came and put food directly into his mouth.

Were these people happy, well-balanced folks with healthy ego structures? All I’m trying to get at is that the Western psychology-based model of ideal human fulfillment is only one model; it may be wonderful and it may be what Hendlin or I most would like, but it’s still just one model, and it is absurd to somebody whom by nature relates to a different model. The most dangerous ego-act we can commit is to think that our own model isn’t absurd under any circumstances. That idea is the beginning of all the bloodshed.

This is in response to Bo Lozoff’s letter regarding my article, “Pernicious Oneness in Spiritual Thinking and Practice,” in Issue 96 of THE SUN. There are a number of comments Lozoff makes that do not accurately reflect the content of my article or my intentions which I would like to briefly answer. While I’m glad to know that my article stirred up enough feeling (along with the interview of Robert Bly) in Lozoff to respond, and am appreciative of the fine work he does with a long-neglected population — prisoners — I find his acerbic comments begging for a response.

To begin with, I did not make a “sales pitch” for my “own orientation” of psychology. I simply suggested that spiritual thinking and practice need to be considered in the light of the very real ego distortions that undermine authentic spirituality. I am not, as Lozoff believes, “heading toward the simple straight message of, ‘Hey there’s nothing new going on; we’ve all got to grow in our natural ways; feel free to explore with the self-confidence and integrity of our own best hunches.’ ” I was and am “heading toward” wanting as many spiritual seekers as possible to honor and respect ego growth, so that we may gain the “self-confidence and integrity” which Lozoff apparently assumes everyone has already developed! Where do “self-confidence and integrity to follow our best hunches” come from? From the balanced, fully developed egoic integration of rational mind and emotion, that’s where! If we all were already at this place, there would be little reason for me to write this type of article to begin with! Certainly, many of the prisoners Lozoff works with would not be in prison had they picked up this “self-confidence and integrity” along the way.

Lozoff confuses what he calls “psychology” with what is more accurately ego development. It is not that I have an attachment to Western psychology or psychotherapy but that my training and study in these areas has alerted me to the need for honoring ego development before dismantling egoic translations through intensive spiritual practices. It is unjustified to state, as Lozoff does, that “his eloquence is nowhere to be found in slashing apart the incredible distortions, failures, and shortcomings of Western psychology.” Had he taken the time to read the original article in Journal of Humanistic Psychology, Lozoff would have noted a number of references to other articles in which my “eloquence” may be found on exactly these topics.

To be critical because I did not pack a book’s worth of exploration into one article (“it’s tacky to present the con of one [spirituality] and the pro of the other [psychology] pretending to provide us with objective insight”) is to miss the point. I am not “pretending to provide objective insights” but attempting to outline, in a brief, tentative, but hopefully helpful way, issues that make for confusion and misunderstanding for many spiritual seekers.

Lozoff is correct in stating that I am biased in favor of psychological development. I continue to observe the negative consequences of seekers who believe they can jump past ego to nirvana. The sequence of pre-egoic-egoic-transegoic, which Ken Wilber has so penetratingly concerned himself with, is not at all “absurd,” as Lozoff claims, but very real, very apparent to anyone taking the time to look closely at the nature of their own mind. It appears that Lozoff has done this, and in doing so, developed a rational mind (although somewhat sloppy in his thinking) that is able to pick apart and dismiss with the stroke of his pen rather sophisticated concepts. I only ask that he allow others to reach the point of ego strength that would encourage them to do the same!

I have been informed that the article has stimulated more comment than anything ever published in THE SUN. Perhaps a nerve in the collective SUN-mind has been touched. If my article promotes thinking, discussion, and even uproar, what else could I ask for?

More Letters
What Do You Think? We love getting letters to the editor for our Correspondence section.
Has something we published moved you? Fired you up? Did we miss the mark?
Send A Letter 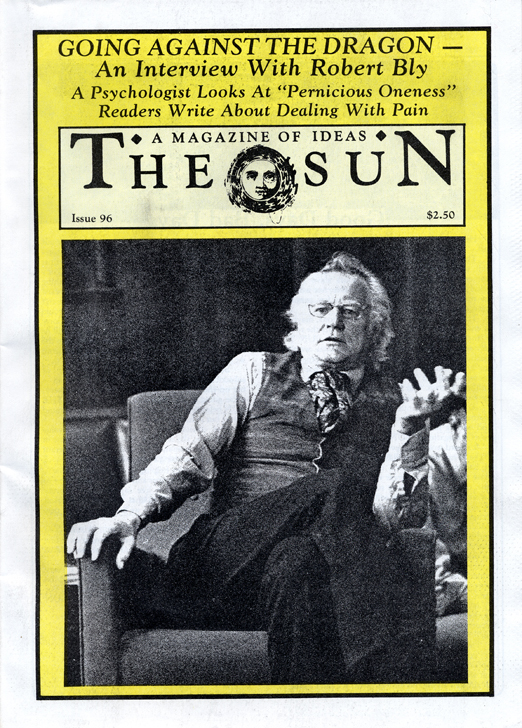 By Our Readers
Photography

Predestination Vs. Free Will

Going Against The Dragon

An Interview With Robert Bly