A Bell Ringing In The Empty Sky

The Best Of The Sun Volume II

A Short History Of Part Of North Carolina: With Some Names Changed To Protect The Innocent, The Guilty, & The Dead
C.B. Clark

Seeing It This Way Helps
Better Than Being A Highway Frisbee
Hal J. Daniel III

Parents, Now And Then
Sparrow

Living At The Edge
Barbara Street

You Eat It
Sy Safransky

Death And Other Cures: An Interview With Dr. Lobsang Dolma
Sy Safransky

The Silent Mind: An Interview With Jehangir Chubb
Sy Safransky

Memoirs Of A Professional Killer: Some Sea Stories From The Big Deuce
Art Hill

We’re All Doing Time: An Interview With Bo And Sita Lozoff
Howard Rubin

What’s Happening?
Who Understands Me But Me?
Jimmy Santiago Baca

We Are People: Interviews With Inmates Of Hillsborough Prison
Ben Chavis

We Killed Them
Ron Jones

The Depths Of A Clown: An Interview With Wavy Gravy
Howard Jay Rubin

News From Hacker City: Some Considered Opinions On The Electric Bass
Richard Gess

Drugs
Personal stories by our readers.

Something Does Push The River
David Spangler

Of God, And My Father
David M. Guy

Seeing The Gift: An Interview With Hugh Prather
Sy Safransky

A Bell Ringing in the Empty Sky would, we knew, be a big book, in spirit as well as size, a generous collection of the best of the essays, interviews, stories, and poems that appeared in The Sun during its first ten years.

Searching for months through the back issues, choosing and discarding, sifting through a decade of words, then sifting some more, we came up with the best, the very best. It was, indeed, a book big in spirit — but it was, alas, too big: more than 1,000 pages, with as many words as War and Peace. Faced with the prospect of yet another round of tough decisions pitting author against author, best against best, we chose instead the time-honored solution favored by parents and politicians: we’d publish two big volumes. Volume I came out in the Spring of 1985. Volume II you’re now holding in your hands.

Since the publication of Volume I — and, in part, because of it — The Sun has found a widening audience. People are drawn to the magazine because it speaks to the human heart, to our deepest possibilities, to the power of love. It does this not in the language of transcendence — not in new-ageisms and glossy truths — but with down-to-earth writing about people’s lives, their sorrows and passions and fears. No less a magazine of feelings than one of ideas, The Sun speaks to who we really are, not who we sometimes think we are. Our lives are a mystery more subtle than words can tell, though words can hint at the mystery.

The Sun’s emphasis has never been solely on polished writing or literary reputation. Some of the people who write for the magazine are well-known; others are unknown. As editor, I’ll sometimes pick a story that’s a tad amateurish over one that's better crafted. So much “good” writing is soulless, thickening the heart with lies and sharpening the symbols of hate. The Sun favors writing — whether rough-around-the-edges or expertly styled — that embraces human contradictions, honors our inherent innocence, helps us awaken from our clouded dream of fear. It favors questions rather than answers. Not all our questions can be answered, and The Sun asks its readers to live with those questions. As Rainer Maria Rilke put it:

“Be patient toward all that is unsolved in your heart and try to love the questions themselves like locked rooms and like books that are written in a foreign tongue. Do not now seek the answers which cannot be given to you because you would not be able to live them. And the point is, to live everything. Live the questions now. Perhaps you will then gradually, without noticing, live along some distant day into the answer.”

Weaving together our stories, our visions, our hard-earned truths, The Sun reminds us that no single viewpoint, no one guru, no easy answer can possibly honor us as much as our own searching. We live the questions. We smile ruefully, knowing there’s a basic unity to all things, but that we can’t name it without distorting and diminishing what it is. So we find other ways to express it: words that point the way (since we know we’ll be on this path a long, long time); words that hint and puzzle and delight; words that let us glimpse, as if from a distance, who we really are; words in an odd and lovely little magazine.

Here, from the first ten years of The Sun, are some of the best of them.

A few years ago, on a cool Fall afternoon in Central Park, I sat down at a bench and watched an odd man playing the drums. He was playing on the lip of a tall waste-basket, drumsticks in his hand.

MY PARENTS’ FRIEND, Joe Gottchauk, took a picture of them soon after they were married. (My father was just a little older than I am now, my mother younger than my sister.) They’re sitting on a couch in a room with just one light, looking together at a book. Their heads are turned down, but you can see my father’s sensitive sailor’s face and my mother’s shy farmgirl face. My mother’s hair is long and loose, as I’ve never seen it in my life, and there is about the photograph a strong feeling of romantic love.

Seeing It This Way Helps 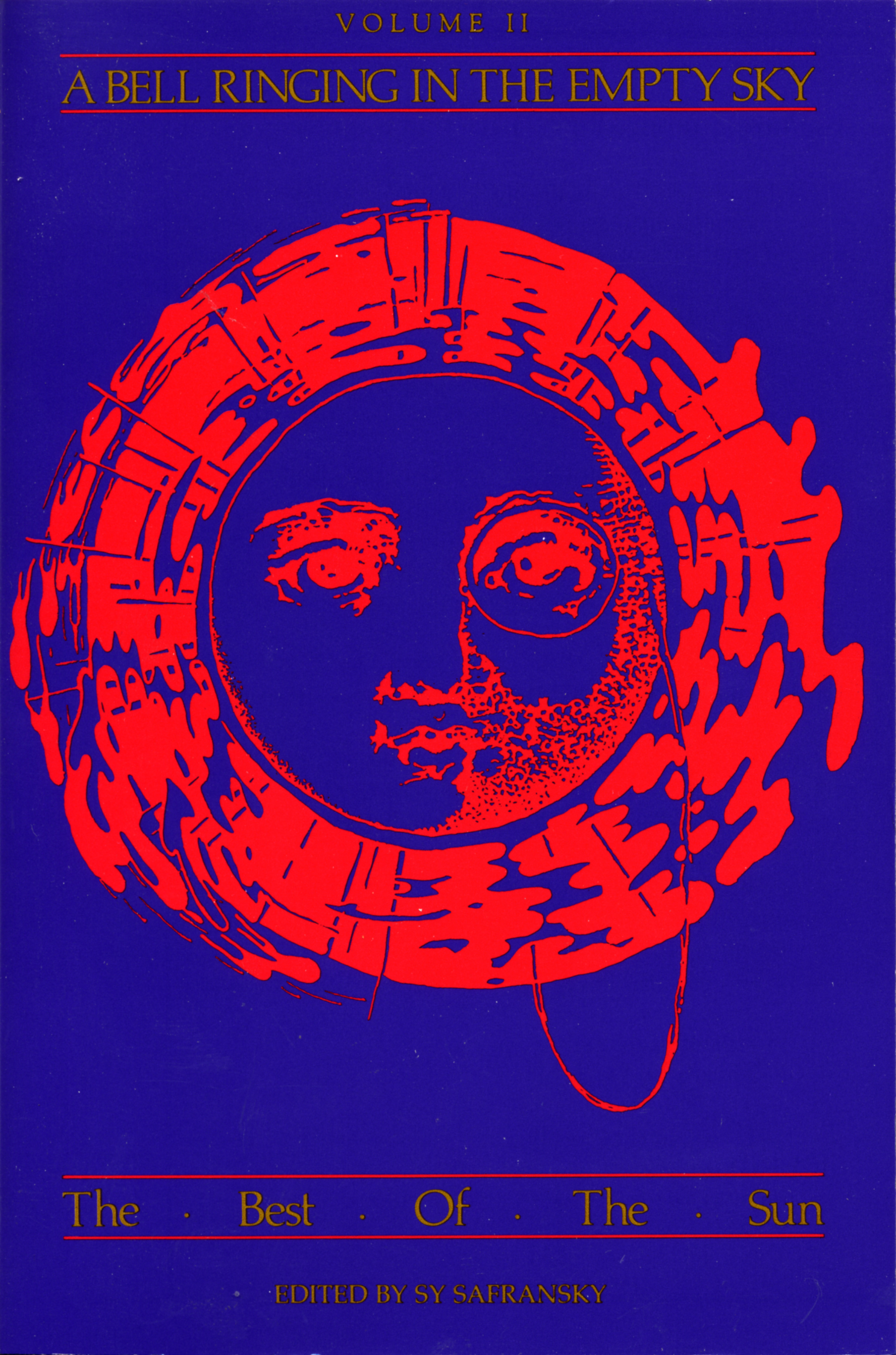