The Best Of The Sun Volume III

A Note On The Cover

A Priest Calls On Sunday Night
Poetry by Edwin Romond

The Heart Of Compassion: An Interview With Ram Dass
Sy Safransky

The End Of A Sixties Dream? An Interview With Stephen Gaskin
Michael Thurman

Aliens In The Garden
Fiction by James Carlos Blake

All The Panamas In The World And Herb’s
Fiction by T.L. Toma

A Soccer Hooligan In America
Fiction by Carl-Michal Krawczyk

Born Too Young: Diary Of A Pilgrimage
Sparrow

The Myth Of Therapy: An Interview With James Hillman
Sy Safransky

Somewhere Along The Line
Poetry by Antler

Flesh Of My Flesh
Poetry by Ona Siporin

Last Year’s Poverty Was Not Enough
Fiction by Ashley Walker

My Mother Is Still Alive
Poetry by Kathleen Lake

Uniting The Opposites: An Interview With M.C. Richards
Sy Safransky

This Life, This Word Unsaid
Poetry by John Hodgen

Finding Out About Your Heart
Fiction by Candace Perry

She Said, Can’t We Just Be Friends?
Poetry by R.T. Smith

On Being Unable To Breathe
Stephen T. Butterfield

The Cure
Poetry by Kathleen Lake

The Evidence Of Miracles
Poetry by Jaimes Alsop

Instrument Of The Immortals
Jake Gaskins

The Prayer Of The Body: An Interview With Stephen R. Schwartz
Sy Safransky

Someone called me recently to ask my advice about starting a magazine. I told her the most important advice I could give her was not to follow anyone’s advice.

If I’d followed the advice I was given in 1974, I never would have started The Sun. You need a million dollars to start a magazine, people told me. That was exactly a million dollars more than I had. To print the first issue, I borrowed fifty dollars. I sold the magazine on the street. For more than ten years, there were fewer than a thousand subscribers and never enough money to pay the bills. Unfortunately, this was the plight of many small magazines in those years; few survived.

Last year, when The Sun celebrated its twenty-fifth anniversary, our assistant editor joked that, in independent-journal years, this made The Sun about two hundred years old. I’m grateful The Sun has evolved from a stapled stack of xeroxed pages to a handsome monthly magazine, with nearly fifty thousand subscribers nationwide. I’m grateful, too — at a time when a handful of media conglomerates control most of what we read in books, newspapers, and magazines — that The Sun survives without corporate backing and without carrying any advertising. One of the few reader-supported magazines in the country, its very existence makes a statement.

The Sun’s literary reputation has grown as well. The magazine has received four Alternative Press Awards from the Utne Reader. Works from The Sun have won the Pushcart Prize, been featured on National Public Radio, and appeared in Best American Short Stories and Best American Essays. But these accolades wouldn’t mean a thing if The Sun hadn’t stayed true to itself: a magazine that honors life in all its complicated glory; that avoids literary pretentiousness and spiritual posturing; that celebrates beauty without ignoring the destructive forces around (and within) us. Sometimes sorrowful, sometimes mischievous, The Sun is a magazine whose politics are personal and whose God isn’t way up in the sky. People who write for The Sun aren’t afraid to look at what they’ve lost; nor are they afraid to insist on joy, to look joy in the eye no matter how hard they’re crying. Their struggle, our struggle: where do we draw the line? The Sun reminds us there are no lines.

In the mideighties, we published A Bell Ringing in the Empty Sky, a two-volume anthology of the best essays, stories, poems, and interviews from the magazine’s first ten years. Stubborn Light, the book you’re holding in your hands, is volume three in the “Best of The Sun” series, covering the magazine’s second decade.

Choosing what to include was a challenge. As I worked my way through the 120 issues we published from 1984 to 1993, my list of “definite” yeses grew longer and longer. I winced, knowing what lay ahead. Mind you, I’m accustomed to making tough decisions; we receive nearly a thousand submissions a month at The Sun. But this was different. These weren’t unsolicited manuscripts. This was writing I’d published, writing I’d fallen in love with. Now I’d fallen in love again.

In the end, as I struggled to pare down my choices, I felt like a hiker who’d been told to lighten his pack until it contained nothing that wasn’t absolutely essential — and then to get rid of half of that.

I consoled myself that no anthology, no matter how inclusive, could do justice to a decade of The Sun. Some of what it leaves out: All those heated exchanges on the Correspondence page. People in Readers Write revealing some secret shame or secret happiness. The amazing photographs. The page of quotations that seals each issue with a kiss. The best of The Sun? It’s the smart, dedicated people who work beside me, and it’s all the devoted men and women who have come and gone. It’s our old house in Chapel Hill with the creaky wooden floors and a ghost I’ve never seen. It’s a subscriber telling me he can’t imagine life without The Sun. As if I could.

Many people worked long and hard on Stubborn Light. Special thanks go to The Sun’s art director, Julie Burke, for carefully overseeing the project and giving the book its quiet, elegant look; assistant editor Andrew Snee for his incisive suggestions and sensitive editing; copy editor Seth Mirsky for guarding the gates of grammar and usage; proofreader Lynda Malone for standing beside him; manuscript editor Colleen Donfield for helping me decide what to leave in and what to take out, and whose comment sheets are themselves works of art; and editorial assistant Rachel Elliott for doggedly typing the text, and doggedly entering the corrections, and doggedly keeping the rest of us moving ahead.

None of my own essays are included in Stubborn Light, since many of them have already been reprinted in my book Four in the Morning. Nor did we include excerpts from the Readers Write section; we’re planning a best of Readers Write, to appear in the near future.

You can open Stubborn Light and begin reading anywhere. But we’ve arranged the book, as we do each issue of The Sun, to be read from front to back. If you read it this way, you may find that Stubborn Light is more than the sum of its parts.

Publication dates are noted at the end of each piece. When reading the interviews, it’s important to remember that people change; their ideas may not be the same as they were ten or fifteen years ago. Three people we interviewed — Rabbi Dovid Din, M.C. Richards, and Stephen R. Schwartz — have died. In 1997, Ram Dass suffered a debilitating stroke, which has limited his ability to speak.

It also grieves me to note the death of two authors whose work appears in Stubborn Light. In 1996, on a blustery winter night in Shrewsbury, Vermont, Stephen T. Butterfield’s heart gave out while he was walking his dog; he was fifty-three. Just the day before, Butterfield had spent hours playing guitar and bouzouki with his Celtic band, When the Wind Shakes the Barley. According to his friends, he had left the session filled with the joy of the music and the communal spirit that comes from making music together.

Mark O’Brien died in July 1999 at the age of forty-nine, in his apartment in Berkeley, California. Almost completely paralyzed by polio in childhood, O’Brien insisted on living on his own, with minimal assistance, most of his adult life. He wrote — with passion, humor, and breathtaking honesty — using a mouth-stick to press the keys of his computer. He died alone, in the middle of the night, in his iron lung.

If O’Brien isn’t dancing in heaven now to one of Butterfield’s lilting tunes, heaven’s the worse for it. 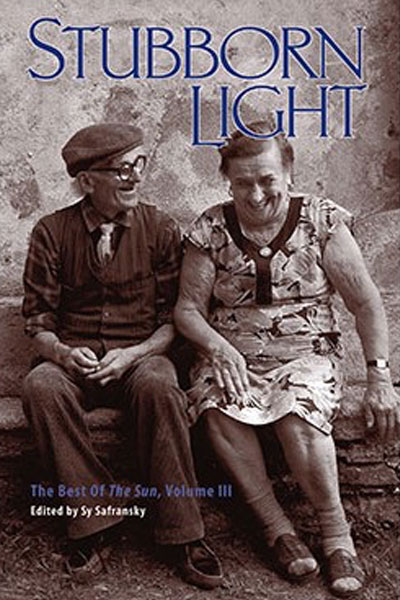