Four In The Morning | The Sun Magazine
close

Four In The Morning

Since Sy Safransky founded The Sun in 1974, his essays have appeared in the magazine. Thirty of his best are collected in Four in the Morning. “This guy is absolutely naked on the printed page,” writes the Asheville Citizen-Times. “No pretension, no elevated ideas, just one man's responses to the world around him and the people he loves.”

The Writing On The Wall

By The Beautiful Sea

The Man In The Mirror

The Sky’s The Limit

Selecting my favorite essays has been like trying to herd thirty rowdy kids onto a bus. They were written to stand on their own, they insisted. Each was unique, each deserved a window seat. Then, too, just about all of them showed up with extra luggage that needed to be left behind. That’s when they discovered they weren’t so unique: certain themes repeated themselves, a few images had slept around.

Read them as you would a sheaf of letters from a friend, making allowances for the coffee stains and loopy handwriting and words crowded together at the end of the page: it’s been a bumpy ride. Careful editing has made the pieces slightly more readable, but I didn’t want to be too careful; written over a period of nearly ten years, the essays reflect different answers to questions that themselves kept changing.

For giving Four In The Morning such an elegant look, thanks to designer Sue Koenigshofer. For help with editing, I’m grateful to my wife Norma as well as Dana Branscum, Terry Toma, Jan Bellard, Pamela Penick, Jeff Qualls, and Cassandra Sitterly. Valuable suggestions also came from Elizabeth Rose Campbell, Carol Logie, Sam Gaines, Cindy Calderwood, and Diana Hall. With so many cooks bent over one stewpot, you’d think I could blame someone else for any mistakes, but responsibility is mine.

The great teacher Marpa was grieving. His oldest son had been killed. One of Marpa’s students came to him and said, “I don’t understand. You teach that all is an illusion. Yet you are crying. If all is an illusion, then why do you grieve so deeply?” Marpa replied, “Indeed, everything is an illusion. And the death of a child is the greatest of these illusions.”

I saw a movie recently, a comedy, “Lost In America,” about a young couple who decide to quit their jobs and spend the rest of their lives roaming around the country.

I’m being as quiet as I can. The children are asleep in the next room and I don’t want to wake them. I thought of going to the office for a while, getting back before they wake up, but that’s hard to do; even when they’re asleep I want to be near them. The time together is so brief: one week each month. I keep thinking this will get easier. It does, in a way. We get used to everything. 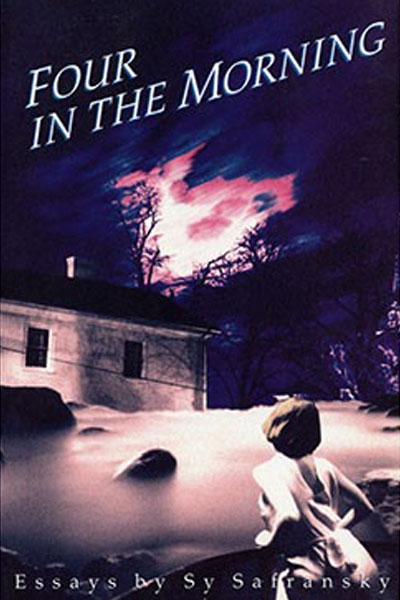