The Mysterious Life Of The Heart

Writing From The Sun About Passion, Longing, And Love

In fifty personal essays, short stories, and poems, The Sun’s writers explore the enigma of love with unremitting candor, leading us through heartbreak and ecstasy, anger and forgiveness, fleeting crushes and lasting relationships. The result is vibrant, messy, mysterious, and enduring.

Contributors include Poe Ballantine, Cheryl Strayed, Sparrow, Steve Almond, and many others.

How Far Did You Get?
Poetry by Chris Bursk

I Will Soon Be Married
Fiction by John Tait

The Leap
Poetry by Larry Colker

The Woman With Hair
Fiction by Robert McGee

An Hour After Breakfast
Poetry by Matthew Deshe Cashion

The Empty House Of My Brokenhearted Father
Fiction by Poe Ballantine

Her Shoes
Poetry by Alison Seevak

And Passion Most Of All
Michelle Cacho-Negrete

Prayer For Your Wife
Poetry by Kathleen Lake

Everything I Thought Would Happen
Ashley Walker

The Song Of Forgiveness
Genie Zeiger

The Year In Geese
Fiction by Rita Townsend

The Word
Fiction by Robley Wilson

Under The Apple Tree
Fiction by Laura Pritchett

I Am Not A Sex Goddess
Lois Judson

The Woman In Question
Tom Ireland

This Day
Poetry by John Hodgen

The Stranger
Poetry by Michael Hettich

When I was in my twenties, I came across a new essay by Henry Miller, then nearly eighty, about his obsession with a beautiful, mysterious, and, as I recall, not entirely available young woman. One of the twentieth century’s most influential writers, a fearless cultural provocateur and irrepressible ladies’ man, Miller was shamelessly in love. Hopelessly and pathetically in love. He thought of the woman constantly. When he couldn’t be with her, he wrote to her every day. At the end of his rope — unable to work, unable to sleep — he was, he admitted, as confused and insecure as a love-struck teenager.

Not that many years removed from adolescence myself, I didn’t know whether to be discouraged or relieved. On the one hand, I’d always assumed that, as I got older, I’d get better at handling this elusive and tempestuous force called love. Surely by the time I was thirty, say, or forty, I’d have developed a modicum of self-possession and would have stopped running around with my emotional shirt-tails flapping in the breeze. Perhaps I’d even be able to look at an attractive woman without assuming she was put on earth to fulfill my longing for completion. Yes, in a decade or two, I’d have it all worked out. But Miller’s misery suggested that Cupid didn’t care if you were a young fool like me or an old fool like Miller: those cute little arrows were going to pierce you, and, before you could even find out the perfect stranger’s name, you’d have stained carpet with cute little drops of blood.

Yet Miller’s honesty also had a liberating effect on me. If — despite his genius, his worldliness, his many marriages, his innumerable affairs — he’d been brought to his knees by this latest infatuation, maybe I didn't have to judge myself so harshly for regularly tripping over my own feet. Were the cultural icons I worshipped smarter than me? Yes. Were they more accomplished? Of course. But why assume they were any better at loving another person or at dealing with the pain love inevitably brings? It seemed as if we were all in this together, the geniuses and me.

On some level, I already knew this. But it’s one thing to realize something intellectually; it’s another to experience it viscerally because a writer is unafraid to be naked on the page. By laying bare his emotions without embellishment or embarrassment, Miller had given me something of great value. He’d shown me the power of being vulnerable, and he’d helped me feel less alone.

Decades later, as editor and publisher of The Sun, that’s the kind of writing that moves me the most, and it’s what you’ll find in The Mysterious Life of the Heart.

All the works in these pages originally appeared in The Sun, a magazine that has been published monthly out of Chapel Hill, North Carolina, since 1974, when I sold the first copies on the street. The Sun itself has been something of a romantic endeavor: born of youthful idealism, built by the hard work of many people, and kept alive by passion — for the written word, for an honest story well told, for fragile humanity in all its guises.

Love is a house with many rooms, and The Mysterious Life of the Heart explores only one of them: not a child’s love for a parent or a parent’s love for a child or a love between siblings or love between friends. It’s about the room upstairs at the end of the hall, shared by two lovers who’ve decided to stay — for a weekend or forever, no one can say. Sometimes they kiss, sometimes they bite. They dream they’re in heaven. They swear they’re in hell. That room.

The sheer volume of writing on this subject that’s appeared in The Sun made it difficult to decide what to include. Choosing fifty essays, short stories, and poems out of the hundreds we considered might have been easier if we hadn’t already fallen in love with and published them all. So we set to work reading and rereading, Venus sitting on one shoulder and Mars perched on the other, and when we finally finished making our choices, what did we end up with? Exactly twenty-five works by men and twenty-five by women. Well, how about that! We’d hit the bull’s-eye without even trying.

This isn’t a book in which you’ll find the seven steps to connubial bliss, with exercises at the end of each chapter to simultaneously tighten your buttocks and open your third eye. But that doesn’t mean the stories, essays, and poems are randomly arranged. Instead, we follow a winding, sometimes treacherous path from the innocence and impetuousness of young love through marriage and devotion, temptation and betrayal, divorce and heartbreak, and finally forgiveness and mercy. When read from front to back, The Mysterious Life of the Heart is a journey worth taking. (Naturally, you’re free to ignore our counsel, begin reading anywhere, and jump from piece to piece, just as you’re free to throw caution to the wind and jump into bed with the next attractive person you meet. Don’t say we didn’t warn you.)

This book is the fruit of many people's labor. That we managed to publish it while also putting out a monthly magazine is a testament to the intelligence and hard work of my colleagues at The Sun. Specifically, I’d like to thank art director Robert Graham for his elegant design and fine eye for detail, and photographer Nicole Blaisdell for her evocative cover photograph; manuscript editor Colleen Donfield for helping to determine the final selections; senior editor Andrew Snee for his sensitive editing of every piece; and managing editor Tim McKee, who shepherded the book from idea to finished product. My deepest gratitude goes to the writers themselves, whose willingness to share their glorious and painful experiences is itself and expression of love.

As the editor of a book about love, I’d be guilty of hubris, and all but inviting the gods and goddesses to smack me silly, if I didn’t acknowledge that, despite being marginally wiser than I was in my twenties, and despite having been married most of my adult wife (to three different women, though not at the same time), I’m hardly an authority on the subject. For if you took everything I’ve learned about love from the women I’ve lived with and the nights I’ve spent alone; from the sacrifices I’ve made and the sacrifices I’ve foolishly demanded of others; from the unforgettable moments I’ve already forgotten and from the ecstasy of spirit I’ll never forget, that ineffable state beyond the veil of separateness where the “I” that says “I love you” is no different from the “you” that hears it — yes, if you took everything I’ve learned about love and dropped it in the ocean, there would be a little splash, and there would still be room for an ocean.

P.S. The best place to read The Mysterious Life of the Heart is in a quiet corner away from the usual distractions. (Avoid public places where laughing or crying is frowned upon.) The publisher grants permission for portions of the book to be read aloud to a loved one, by candlelight, between the hours of 10 P.M. and 2 A.M. But using this book to try to seduce someone or justify the unbelievably selfish way you acted last week is expressly prohibited.

I suppose it might make sense at this point in my life — with a wife and a son and long afternoons of contentment drawn around me — to disavow my passion for Solange. Or, at the very least, to relinquish her memory. But you don’t relinquish anything when you’ve fallen in love, no matter how briefly. The heart writes in indelible ink.

How Far Did You Get

Our failing family farm had two trailer homes sitting vacant. To make ends meet, my parents rented one to Valerie, a pregnant, unwed twenty-three-year-old with tomato red hair who worked at the Kroger deli, where my mother was the manager. 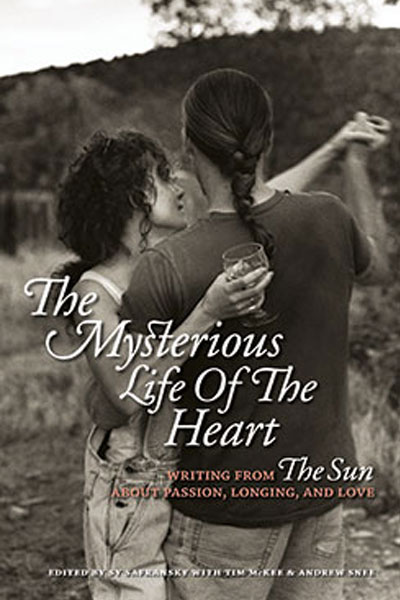