Sunbeams: A Book Of Quotations | The Sun Magazine
close

Sunbeams: A Book Of Quotations

Featuring the best Sunbeams from The Sun’s first two decades, this completely redesigned edition of the bestselling book in our library is full of eclectic insights about the human experience.

This book does not include a table of contents.

A Note On The Revised Edition

No one warned me that revising a twenty-year-old quotation anthology would be like renovating an old house: you don’t know what surprises are in store until you tear off the weathered siding and rip up the sagging floor.

Last year I asked our art director, Robert Graham, to come up with a new design for Sunbeams. Then our managing editor, Tim McKee, suggested we take this opportunity to proofread and vigorously fact-check the book. Really? I asked. Hadn’t I confidently asserted, in the introduction to the original Sunbeams, that all the quotations were “accurately worded and attributed”?

Talk about thumbing your nose at the gods! As our proofreaders got to work, they came across innumerable small and not-so-small surprises: imprecise wording and erroneous attributions, asbestos in the ceiling and frayed wiring in the walls. In fairness to those who worked with me on the original version, I’ll simply say we did the best we could. Quotations can be tricky, after all. It isn’t always clear who originally wrote or spoke them, and more than a few are “improved” as they’re passed from one generation to the next. In 1990 we would have had to spend months in libraries tracking down the original sources. In today’s digital era, when it’s possible to search many texts online, we were able to complete the task in much less time.

Thanks to Marianne Erhardt for finding a verifiable source for almost every quotation; veteran proofreader Seth Mirsky for dotting every i and senior editor Andrew Snee for crossing every t; art director Robert
Graham for the elegant new look; and managing editor Tim McKee for shepherding the project to completion.

Was it worth all the effort? Of course. Great quotations are the wisdom of the tribe. They bridge time and space. They connect the living and the dead.

The Talmud says the right quotation at the right moment is like “bread to the famished.” May you be fed.

Introduction To The Original Edition

Once a month, my desk at The Sun becomes extravagantly cluttered with stacks of books and magazines and letters and scribbled notes. For hours, I sift through them — reading, jotting down a few words, staring out the window, reading some more, searching through hundreds of quotations for the handful that will become next month’s Sunbeams.

It’s a familiar ritual. But, even after all these years, I still don’t know why I fall in love with some quotes and not others. Drawn from such diverse sources as stories, essays, speeches, interviews, novels, memoirs, and poems, the Sunbeams page surely reflects my own likes and dislikes, passions and confusions. Yet some strange alchemy seems to be at work: I can’t be sure whether I choose Sunbeams or they choose me.

This is a collection of the best Sunbeams from more than a decade. Mercifully — for my sake and yours — I didn’t try to organize the quotes into subjects; instead, they appear as they did in the magazine, with all the startling juxtapositions that honor, more accurately than any subject headings, the rich and paradoxical nature of our lives.

Placing certain quotations together is like seating strangers around a dinner table; you can’t be sure where the conversation will lead. Also, it’s amazing how often a quote will affect us in a way the author never could have imagined. Sometimes the meaning of a quote changes simply because it occurs out of context. But it’s also true that certain words have a life of their own. Clear as a window, they allow us to see through them; reading them, we see what we need to see.

I haven’t deliberately left out well-known quotations, though I tend to shy away from them. Certain favorite authors come up again and again, but if the same quote appears twice, it’s in spite of the most rigorous proofreading. Every effort has been made to make sure the quotes are accurately worded and attributed; if the name of the work was known, it too was included. If a quote seemed worth using but, because of its gender-exclusive language, was plainly sexist, it appears unedited. Such a decision can be argued endlessly; I saw no choice but to be faithful to the original text.

Perhaps all anthologies owe a debt to kindred anthologies, and this one is no exception. I have more quote books than many small libraries; special favorites are Richard Kehl’s Silver Departures, Art Spiegelman and Bob Schneider’s Whole Grains, Russell McDougal’s Mirror of Mind and — yes — John Bartlett’s Familiar Quotations, which I find surprisingly readable.

Thanks, finally, to all the readers of The Sun who have sent in suggestions for Sunbeams, and to everyone at the magazine who helped to prepare this book. If you’d like to know more about The Sun, an independent journal that publishes a wide range of essays, interviews, fiction, and poetry — and still, every month, a page of Sunbeams — drop me a line at 107 North Roberson Street, Chapel Hill, NC 27516.

Most quote books beg to be opened at random, but consider reading this book front to back. It’s divided into “chapters” that correspond to the original Sunbeams pages from The Sun, set off from each other by typographical section breaks.

I tore myself away from the safe comfort of certainties through my love for truth — and truth rewarded me.

Oh, you who are trying to learn the marvel of love through the copybook of reason, I’m very much afraid you will never really see the point.

I have no money, no resources, no hopes. I am the happiest man alive.

You’ve got to have something to eat and a little love in your life before you can hold still for any damn body’s sermon on how to behave.

A man can no more diminish God’s glory by refusing to worship Him than a lunatic can put out the sun by scribbling the word “darkness” on the walls of his cell.

Sad soul, take comfort, nor forget / That sunrise never failed us yet.

The next message you need is always right where you are. 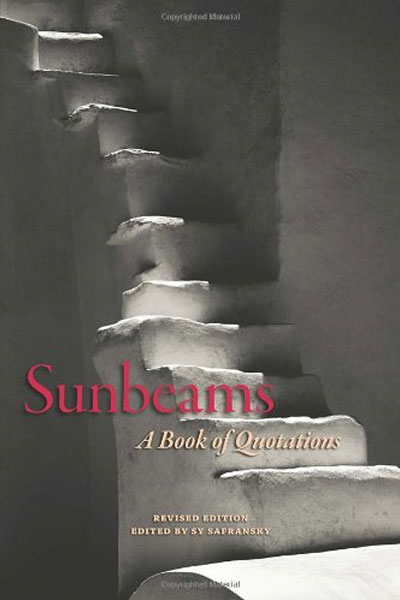