We’re in the check-out line and I’m putting the groceries on the counter. This is the hardest part of shopping with a two-year-old. Jeffrey’s apple, healthful consolation for all the things I have just refused him, is down to the core, and he’s working himself up to a crescendo of desire. “Daddy, I want a . . . a . . . I want a . . . a. . . .”

The narrow passage is walled with mints, gum, lollipops, and candy bars. I manage to convince him that it’s all yucky, bad for him, that it will give him a tummyache, all the while feeling like a hypocrite because since I quit smoking I always have some gum or candy in my pocket. Then he turns to the film, batteries, cigarettes, and tabloids. I explain to him that cigarettes are also yucky. A headline reads: “Man With Split Personality Weds Self.” The woman ahead of us pushes our groceries back with her forearm, tumbling stacked cans, and whacks a wooden stick between our orders. When Jeffrey grabs a bag of disposable razors, I take it from him. He squeezes shut his eyes, his face gets red, and he howls.

Today, because he is still howling, we make it past the dozen inverted jars of twenty-five-cent jawbreakers, superballs, tin rings, stale peanuts, and “slime” in plastic bubbles.

I love this part. The look on his face is a plea but a confident one. I’ve never refused him. I remember giving my own father that expectant look; and when I dig down deep in my pocket past the car keys and the secret candy, I am my father; and when I lift him under his arms, I can feel my father pick me up and swing me briefly through the air; and when he’s in the saddle and I’ve dropped a quarter in the slot, and the pony bucks and begins to rock, and I see his face first fearful then delighted, I am my son.

I put him in the saddle, worried as always that he’ll fall off, and I wonder why the stirrups are so low that by the time your legs are long enough to reach them you’re too old to ride. “Hold on tight now.”

But this time the quarter drops and nothing happens.

“Oh, we have to give the pony some sugar,” I say. I put my hand near the pony’s mouth while I look underneath to see if it’s plugged in. The plug is in the socket but the cord has been torn from it.

The pony’s tail has been bobbed by vandals or just by kids playing hard, but there’s a knob of it left for me to grip and rock the pony back and forth. It’s hard for me to reach both Jeffrey to steady him and the pony’s tail to rock it hard enough to convince him everything is OK. “Watch where you’re going!” I tell him when he grows suspicious and starts to turn around. When my shoulder starts to hurt, I tell him to say, “Whoa!” When I lift him down he says, “Thank you, pony.”

He doesn’t want to sit in the shopping cart. “Then you must hold Daddy’s hand,” I say. “There are too many cars.” The parking lot is jammed: cars are circling, looking for spaces; horns are blowing; people pushing carts are trying to navigate among the cars. I change my mind, lift Jeffrey up and put him in the seat, ignoring his protests.

“Sir! Sir!” A short, fat man in a white V-neck T-shirt is coming toward us, one finger held up before him. “You mind if we follow you and grab your cart? There’s none left.” A boy is with him, about ten or eleven, also fat.

The four of us enter the chaos and make it to the car. When I’ve loaded the bags, the man thanks me, and the boy takes the cart. I carry Jeffrey, quiet now, around to the other side to buckle him in his car seat.

“Whoa! Whoa! Whoa!” The fat man is yelling at a large red Mercury backing toward the boy who’s standing frozen with the shopping cart. The windows on the Mercury are down, and the music is loud. The car is shining; even the tailpipes are polished. It stops, rocking; the driver has slammed the brake.

“Hey! Who the hell you think you’re talking to?” The driver, a lean young man in tight black jeans, no shirt, is out of his car and moving toward the fat man.

The man, his hands crossed in front of his frightened face, says, “Nothing. I’m sorry. Sorry.”

I see the boy turn away. He doesn’t move, just stands there with the cart until the shirtless man gets back in his gleaming car, slams the door, and revs the engine. I see the father catch up to the boy and put his hand on his son’s shoulder and the boy shrug off his touch and walk ahead very fast, fat jiggling, pushing the cart, wiping his eyes with the back of his hand. I see myself, having done nothing, not doing anything, and not saying anything now to the heavy man who stands still, looking down, before he follows after his son.

While I buckle the belts of his car seat, Jeffrey asks me, “Why that man was shouting?”

“I don’t know, Jeffrey.” I walk around and get in the driver’s seat.

“Daddy, why that man was shouting?”

“Because I don’t, that’s why!” I shout at the ceiling. I start the engine and release the brake.

Jeffrey is screaming now, and when I turn, angry and out of patience, and see his face, I know this is not a tantrum. Tears pour from eyes wide open and his face is white with fear. I pull the brake back on, lean back, and touch him. “Daddy’s sorry. Don’t cry. Daddy’s sorry. Wait,” I say, “I have something good for you.” I push myself up high in the seat so I can reach down deep in my pocket. 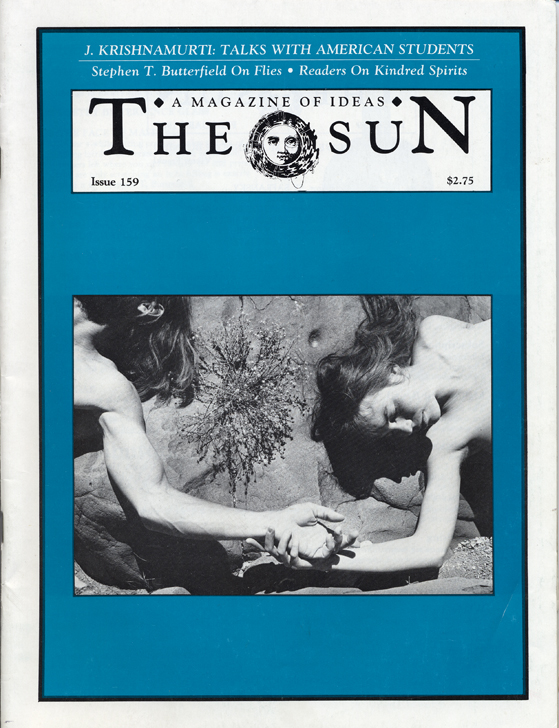 Don’t Be My Valentine Poem