Hell is made up of yearnings. The wicked don’t roast on beds of nails; they sit on comfortable chairs and are tortured with yearnings.

It is important to get out of your skin into somebody else’s. . . . Somebody else’s tragedy is not the same as your own.

To be nobody but yourself, in a world which is doing its best, night and day, to make you everybody else, means to fight the hardest battle which any human being can fight, and never stop fighting.

Question: What do you mean when you say that you’re power hungry? . . . The power over the word?

Ken Kesey: No, it’s not even power over it, just to be involved in it. You know, when you listen to a Beethoven piece, or you read a Shakespeare piece, sometimes the piece itself drops out; you don’t think of it in terms of lines or music. I think of it as a bubble. And the bubble exists here between us. And when you’re listening to Beethoven’s Ninth you can put your hand inside that bubble and you can feel his hand in it, too. And time drops away and you enter timelessness. And it’s psychedelic when you read or hear or get involved with anything like that, whether you’re reading or hearing or standing to the side of it. Just being a part of it is wonderful.

When the forms of the old culture are dying, the new culture is created by a few people who are not afraid to be insecure.

Have you ever seen an inchworm crawl up a leaf or twig, and then clinging to the very end, revolve in the air, feeling for something to reach something? That’s like me. I am trying to find something out there beyond the place on which I have a footing.

I saw that the universe is not composed of dead matter, but is, on the contrary, a living Presence; I became conscious in myself of eternal life. It was not a conviction that I would have eternal life, but a consciousness that I possessed eternal life then; I saw that all men are immortal; that the cosmic order is such that without any peradventure all things work together for the good of each and all; that the foundation principle of the world, of all the worlds, is what we call love, and that the happiness of each and all is in the long run absolutely certain. The vision lasted a few seconds and was gone, but the memory of it and the sense of the reality of what it taught has remained during the quarter of a century which has since elapsed.

A person who cannot move and live a somewhat normal life because he is pinned under a boulder has more time to think about his hopes than someone who is not trapped that way.

Only our concept of time makes it possible for us to speak of the Day of Judgment by that name; in reality, it is a summary court in perpetual session.

“Are you as lonely as that?” I asked.

His fear was like a large cardboard box inside his head, empty but bulky, leaving room for little else.

Jane Smiley
The Blinding Light Of The Mind

When a poet’s mind is perfectly equipped for its work, it is constantly amalgamating disparate experiences; the ordinary man’s experience is chaotic, irregular, fragmentary. The latter falls in love, or reads Spinoza, and these two experiences have nothing to do with each other, or with the noise of the typewriter or the smell of cooking; in the mind of the poet these experiences are always forming new wholes.

Since God has given me a cheerful heart, He will forgive me for serving Him cheerfully.

The only thing one can be proud of is of having worked in such a way that an official reward for your labor cannot be envisaged by anyone.

Life is a foreign language. All men mispronounce it. 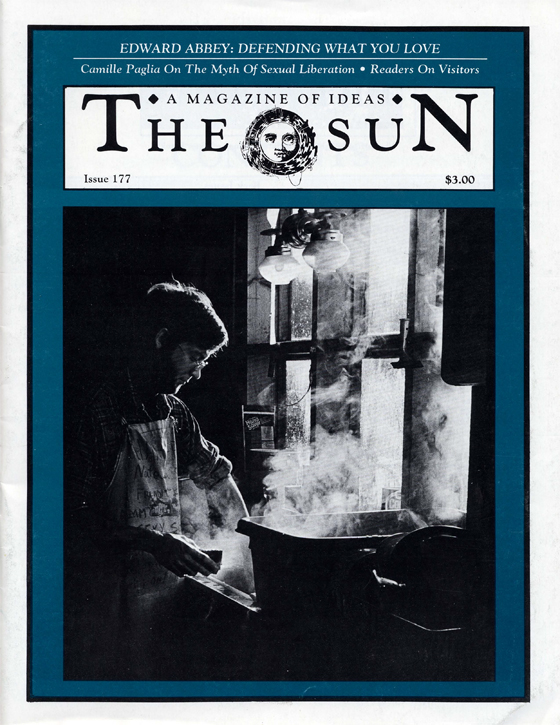 Defending What You Love

An Interview With Edward Abbey

From The Holy Mother Of Jobs

(Formerly The Goddess Of Labor): A Report On A Poor Supplicant

The Myth Of Sexual Liberation