I found Sally Mann’s photograph “Emmett, Jessie, and Virginia, 1989” so striking that it was hard for me to understand John Rosenthal’s complaints in his essay “Sally Mann’s Beautiful and Treacherous World” [June 1993]. The older girl’s bare chest showed what natural strength and beauty there is in a naked but not yet sexual body. Their serious faces also showed a kind of power that we often shy away from or deny in children; all too often, we seem to prefer them vulnerable, powerless.

In John Rosenthal’s curiously troubled essay on Sally Mann’s photographs in her new book, Immediate Family, no criticism is too intellectually sloppy to be admissible. A handful of these pictures of the artist’s three children feature the young’uns nude. The case for the prosecution rests on Rosenthal’s spinsterly fretfulness over the “moral issues” arising here and on his objections to the images’ having been in some measure staged — thus, he wails, not “the real thing.” A more fatuous critical approach would be hard to imagine.

I’m inclined to dismiss his moral qualms out of hand, since they’re so obviously the product of a twisted imagination (no other kind could look at these stunning images and see “pedophilic implications” or “the polymorphously perverse”). Equally stupid but less ostentatiously so is Rosenthal’s confused squawking to the effect that Mann has treacherously violated the sacred “distinction” in art photography “between truth-telling and contrivance.” No such distinction exists. Every photograph — no matter how objectively journalistic the photographer’s intent — is to some extent a subjective fiction, a selective remake of an infinitely complex lived moment.

A distinction does exist, though, between art and, for want of a kinder word, propaganda. Yet in Rosenthal’s mind there’s no difference between tabloid news shows like “Hard Copy” (to which he likens Mann’s work) and, let us say, the films of Italian neorealism, which often achieved a gritty documentary look as the result of meticulous planning. But for the rest of us there is a difference, and it lies in the presence or absence of artistic truth, often a very different commodity from journalistic “fact” (whatever that might be).

Sally Mann’s photographs explore childhood with an attention to variety of mood and situation and to complexity of feeling, which speaks of something rather more rare than mere genius. These brilliant pictures alert us to the wonder and mystery of family life and love, and sometimes they alert us to the flaws in our own ideological postures toward those subjects. If John Rosenthal doesn’t get this, that’s his problem. The rest of us can look with astonishment and gratitude on these photographs and allow them to enrich our lives. They are extraordinary and the really “real thing.”

Apparently Niall MacKenzie and Thomas Heuberger believe that critics shouldn’t waste their time dealing with such issues as the right to privacy — in this instance, the right of underage children not to be used as models in sexually suggestive photographs. In a marvelous turn of logic, Heuberger suggests there’s something wrong with my “personality,” while MacKenzie insists that my imagination is “twisted.” As the comedian said, this is a tough crowd.

To these guys, anybody who suggests that an artist lives in the same world and deals with the same ethical issues as ordinary people is just a stand-in for Jesse Helms. Perhaps they worry that any discussion about the responsibility of art or artists raises the specter of censorship. Tragically, this limits their perception of art to an appreciation of its affects (for which, incidentally, Mann is justly praised); however, in the presence of “meaning,” of implication, they simply slam shut, like coffins. Obviously they don’t want me (or anybody else) to address the questions raised by Richard B. Woodward in his article “The Disturbing Photographs of Sally Mann” in the New York Times Magazine. If Mann considers it her responsibility, Woodward queries, to keep her children from harm’s way, “has she knowingly put them at risk by releasing these pictures into a world where pedophilia exists? [And] can young children freely give their consent for controversial portraits even if the artist is their parent?”

May I recommend Milan Kundera’s The Book of Laughter and Forgetting to MacKenzie? Especially Kundera’s thoughts on the danger of altering the rich factuality of the photographic image. Readers of Kundera’s wonderful book will recall how Clementis, one of the founders of communist Czechoslovakia, was airbrushed out of photographs (and history) once he was accused of treason and hanged — an attempt to refashion the memory of actual events into a more suitable, if completely dishonest, shape. Since MacKenzie declares that every photograph lacks objectivity and is “to some extent a subjective fiction,” he might be surprised to find out what happens when objectivity is overthrown by totalitarian thugs, instead of by a few theoretical morons.

I enjoyed John Rosenthal’s essay on Sally Mann’s photographs [“Sally Mann’s Beautiful and Treacherous World,” June 1993]. But I’m not sure that Calvin Klein photography is bad art. Rosenthal seems to believe it is, just because it is Calvin Klein. But I’ve observed that children of a certain age actually do look like those models in Calvin Klein ads: cool, erotic, distant. Look at your teenagers when they’re just doing nothing. Most of the time you’ll see very dumb faces, but every so often you’ll see those wistful, beautiful, seemingly posed looks that remind you of, if not Calvin Klein, perhaps Michelangelo.

I applaud John Rosenthal’s essay. Something sacred has been violated in Mann’s photographs. The role of mother — to protect and shield her children — has been subverted by the desire to expose.

John Rosenthal lacks the delicacy of touch required to dissect for analysis the poetic imagery of Sally Mann. Bogged down in his deliberations over “tradition” and “taboo,” he passed over a work of tremendous emotional power and dignity. Moreover, the banalities of his sexual preoccupations throw less light on the work itself than on his personality.

Startled by the beauty and depth of Mann’s work, I find irrelevant the means by which she is able to use her creative powers to reflect intimate and faithful impressions. The function of the image, as Gogol said, is to express life itself, not ideas or arguments about life.

Thomas Heuberger Seward, Alaska
More Letters
Thank You Your donations helped to keep our ad-free, nonprofit magazine in circulation last year, funding everything from production to distribution. Learn how you made a difference last year. Learn More 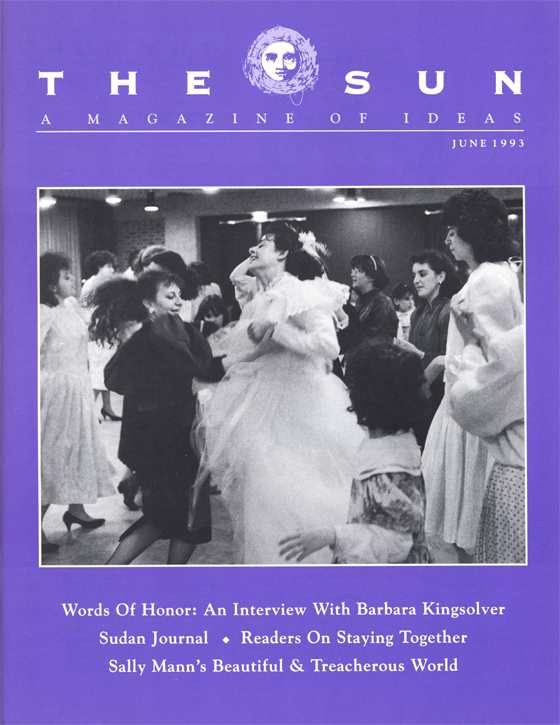 Next Door My Neighbor Is Moving