Like a warm cloak, the mundane settled onto his shoulders. He pulled the edges of his days close around him, nestling into their routines. Each day was like the last, each a memorized beginning, middle, and end, no moments jarring like the sudden jangling of a doorbell, the shrill ringing of a telephone, the arrival of an unwanted package that required his signature. Every day had the delicious aura of the expected.

He woke at six, put on his shabby, orange drawstring pants and sweat shirt which hung on a hook in the closet, pulled on cotton socks and slippers, lay on the living room rug, and practiced six exercises recommended by a Tibetan master to increase longevity. Then he boiled water on the stove to make two cups of strong, freshly ground Nicaraguan coffee, allowing the grounds to swell for thirty seconds before adding the carefully measured water. He drank a glass of spring water with lime juice to help move his bowels and strengthen his liver, while waiting patiently for the filter to drain before filling his cup and lighting the first of seven cigarettes for the day.

Camels were his buddy — he’d known them longer than anyone else, almost fifty years, and they were always the same, always available. He’d walk a mile for a Camel if he had to, but he never did. Every fourth Saturday he bought a carton from the Palestinian storekeeper on Irving Street. Two hundred Camels every twenty-eight days gave him a surplus of forty-five cigarettes a year to expend as he saw fit in moments of unexpected joy or anxiety or frivolity, like when he invited out for coffee the woman at the museum who had explained to him the intricacies of design in Turkish kilim rugs. He invited her because she reminded him of a place almost forgotten, of moments of tenderness and abandon on West End Avenue and 87th Street, looking into Riverside Park from the twelfth-floor windows through the soft snowflakes of an early storm, while he caressed her body, kissed the back of her neck, licked the curls behind her ears, lost in an ecstasy he’d thought he could take for granted but which, after seven years, degenerated into mutual deceit. The cup of coffee with this woman led to nothing — hesitant smiles, a cool and perplexed goodbye, his mouth tasting of ashes. He waited until she was out of sight before he lit up, drawing in the smoke lightly, rolling the cigarette between his thumb and forefinger, respecting its familiar weight and texture.

After his wake-up routine, he walked to the gym and worked out on the weight machines and the treadmill. He sought variation in the sequence, but the goal was always the same: maintain strength, increase endurance and flexibility. He didn’t want to die like his father, suffering several debilitating heart attacks, slowly losing strength until his seventy-sixth year, dying incontinent in bed. He wanted to die midstride. The age didn’t matter.

The weights he chose kept his muscles well toned. He concentrated on each movement, exhaling on effort, inhaling on release, slowly pushing against the weight, then deliberately resisting its return to rest, repeating each movement thirteen times before he moved to the next machine. Each one was a meditation, an awareness of himself in space isolating the exact muscles required for each effort — no more, no less. He never grunted, breathed hard, grimaced, or struggled with the weight. He knew the slogan no pain, no gain was bullshit. Pain slowed him down. Pain was the body’s signal of imbalance, of doing something wrong. It was pointless to create suffering when life itself was suffering enough.

This morning he remembered a dream he’d had the night before. He was driving north through the Carolinas with his bride, except the time was the present. The car was a collapsible airplane, a small, single-engine plane that could be flown near the ground at high speeds. It was a fair, early autumn day, and they decided to fly along the coast. He was steering the plane, which required him to lie horizontally in the open cockpit, catching only glimpses of the sky and the land, relying on his bride for acute observation of the landscape, direction, altitude, and weather conditions. She reported unexpected thunderstorms west of the cape and recommended they land on a nearby highway. He tried to see it, but every time he looked up the wind seared his eyeballs and blinded him. He groped for his steel-rimmed glasses but found them shattered. Using her eyes, they made a safe landing and headed to a nearby town to find lodging. He soon realized he was nearly blind, able to see only with great difficulty out of the corners of his eyes. The rest was opaque and threatening.

Images from the dream flitted through his mind as he toned his trapezius and rhomboid muscles during the rowing exercise. He had learned to raise the seat slightly more than recommended in order to increase control and more nearly approximate the actual conditions of rowing a boat. The precise action of his muscles was easier for him to picture than his former wife, whom he hadn’t seen in thirty years. In the dream she was a shadowy guide whose face he saw clearly only once. It was open and friendly, full of robust energy, her eyes as clear and green as the Belgrade lakes of Maine. He understood the dream guide was not his former wife but part of himself, some aspect he was ignoring, though what that was he couldn’t figure out. After all, his needs were satisfied, his goals met. He enjoyed his life.

Since retirement he’d had no pressing responsibilities. He rose early, exercised, ate modestly, kept his mind entertained through reading, music, and art. He sometimes met old friends on Sundays for a walk, concert, or movie, and he went to bed at a reasonable hour. He was even satisfied with his decision to keep smoking. He had tried everything to quit — hypnosis, cold turkey, aversion, twelve-step programs — but nothing replaced the calculated pleasure he felt on lighting up seven times a day at specified times. Otherwise he panicked. If smoking let him live quietly, it was OK by him.

He realized that the world is hell. That faced with crime, greed, injustice, and other human horrors, those who believe in revelations, miracles, and salvation are weak of heart and mind. He had moments of hope, peace, and joy, but he saw them for what they were: transient, fragile emotions. The significance of his life lay in its being denser than these fleeting moments. Consistency was a virtue for those like himself who understood fully what it was to be human.

He turned his attention from the weight machines to the treadmill. His pelvis was tight, and his abductor and extensor muscles lacked flexibility and strength. Tomorrow he would spend time trying to manage a little more stretch. He pressed the start button and the rubber treadmill began to turn, slowly at first, then gaining speed as he increased the settings. He walked at four and a half miles an hour for a two-minute warm-up, then at five miles an hour, a threshold he couldn’t pass without pain in his left ankle. He wanted to push beyond but hadn’t yet found the key. He knew it would come to him if he was patient.

He controlled his life the same way, pushing until he felt pain, trying to get beyond the threshold. If it continued to hurt, then fine; he had found a limit of endurance, of expectation, like when he realized he was past the age for intimate relationships, no longer tolerant of people’s woes and inadequacies. Everybody had a tale to tell, himself included. So what?

He increased the treadmill’s speed, determined to push back the threshold. He quickly adjusted his gait, still comfortable, foot striking floor, knee flexing, hip rotating, spine moving rhythmically, head and neck relaxed, eyes looking ahead but not seeing the moving bodies around him. He was halfway to his goal of forty minutes, waiting for the first flush of sweat, the endorphins. He noticed twinges of pain in the ankle and focused his attention on it, hoping to reassure the ankle that everything was OK. The pain lessened momentarily but then returned, increased. He slowed the treadmill to five miles an hour, and the pain disappeared. But now the exercise was effortless. He wanted more but didn’t know how to achieve it.

His relations with women had been like that, effortless and pleasurable at first, then ending when they met some impenetrable barrier after six months or seven years. There was always something in the way — an inviolable intellectual principle, insufficient genital juice, an intuition backed by the stars.

He pushed up the speed again and noticed a woman of his generation settling into the rowing machine directly in front of him. She glanced at him as she sat down, her friendly green eyes breaking his concentration. He drifted out of sync with the machine, caught himself in time, and tried to think only about his ankle. But he couldn’t help noticing the strength of her back, the curves of her buttocks.

He looked away, concentrating again on the treadmill. His gait was effortless, foot striking the floor, knee flexing, hip rotating, spine rhythmically moving, eyes unseeing now, his awareness descending to his left ankle, slight pain, shifting weight forward, decreasing pain, letting go could be the key — but still he resisted contact, not wanting to exchange opinions, courtesies, how is the weather.

His ankle demanded attention. He massaged it with his mind, but the pain didn’t ease. He experimented with his weight, allowing his balance to move outward from his chest, centering his attention a foot and a half in front of him. The pain ceased. He had become nothing, a weightless ball of energy moving through unbounded space.

Her buttocks caught his eye as she stood up in front of him. Watching her, he suddenly stumbled and his feet flew off the end of the treadmill. He lurched forward to grab the rail and hit the stop button, then landed on the floor. She was standing before him, smiling. He smiled, too, at himself, his clumsiness, his distraction. Looking directly into her face for the first time, he saw an uncluttered landscape. Easily, he touched her arm.

She smiled. Unexpected thunderstorms west of the cape, she said. 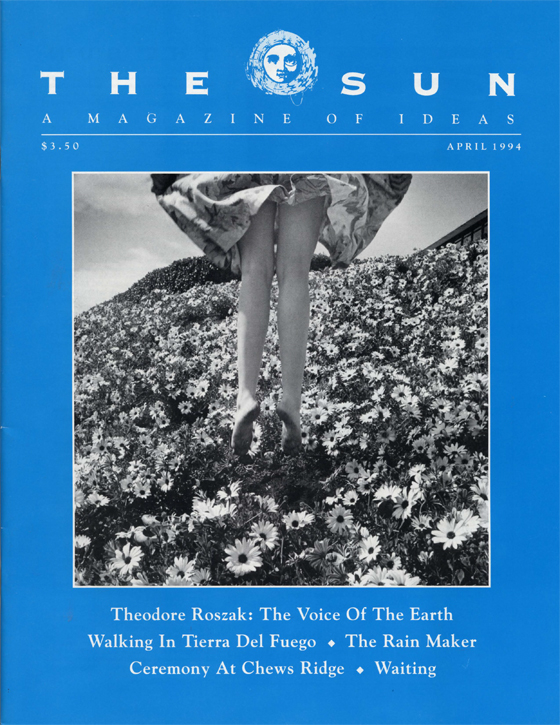 Saturday Morning At The Supermarket