Today in America — and every day in America — seventy-six million Valium will be swallowed. In addition, some thirty million people will glue themselves to soap operas on television. It would seem that our culture is not well adapted to deal with pain.

The least pain in our little finger gives us more concern and uneasiness than the destruction of millions of our fellow beings.

It is only great pain, that slow protracted pain which takes its time and in which we are, as it were, burned with green wood, that compels us philosophers to descend into our ultimate depths and to put from us all trust, all that is good-hearted, palliative, gentle, average, wherein perhaps our humanity previously reposed. I doubt whether such pain “improves” — but I do know it deepens us.

The goal is to live a full, productive life even with all that ambiguity. No matter what happens, whether the cancer never flares up again or whether you die, the important thing is that the days that you have had, you will have lived.

Illness is the doctor to whom we pay most heed; to kindness, to knowledge, we make promises only; pain we obey.

Health of body and mind is a great blessing, if we can bear it.

When a man dies, he does not die just of the disease he has: he dies of his whole life.

Dearest Lord, may I see you today and every day in the person of your sick, and whilst nursing them, minister unto you. Though you hide yourself behind the unattractive disguise of the irritable, the exacting, the unreasonable, may I still recognize you and say: “Jesus, my patient, how sweet it is to serve you.”

No drug, not even alcohol, causes the fundamental ills of society. If we’re looking for causes of our troubles, we shouldn’t test people for drugs; we should test them for stupidity, ignorance, greed, and love of power.

He who is of calm and happy nature will hardly feel the pressure of age, but to him who is of opposite disposition, youth and age are equally a burden.

I have never been anywhere but sick. In a sense sickness is a place, more instructive than a long trip to Europe, and it’s always a place where there’s no company, where nobody can follow. Sickness before death is a very appropriate thing and I think those who don’t have it miss one of God’s mercies.

Compassion for myself is the most powerful healer of them all.

A drug is neither moral nor immoral — it’s a chemical compound. The compound itself is not a menace to society until a human being treats it as if consumption bestowed a temporary license to act like an asshole.

I was once thrown out of a mental hospital for depressing the other patients.

Here is a mental treatment guaranteed to cure every ill that flesh is heir to: sit for half an hour every night and mentally forgive everyone against whom you have any ill will or antipathy.

The Greek physician Galen was called to attend the wife of a Roman aristocrat. Her doctor had been treating her for an organic complaint, but she had not improved. Galen, while taking her pulse, mentioned the name of an actor with whom her name was linked in the gossip of the town. Her pulse immediately bounded. Then Galen leaned down and whispered something in her ear that made her laugh. That laugh began her cure.

Never go to a doctor whose office plants have died.

Become a Friend of The Sun Donations keep this ad-free, nonprofit magazine in circulation. Make a gift of support today. Click Here To Donate 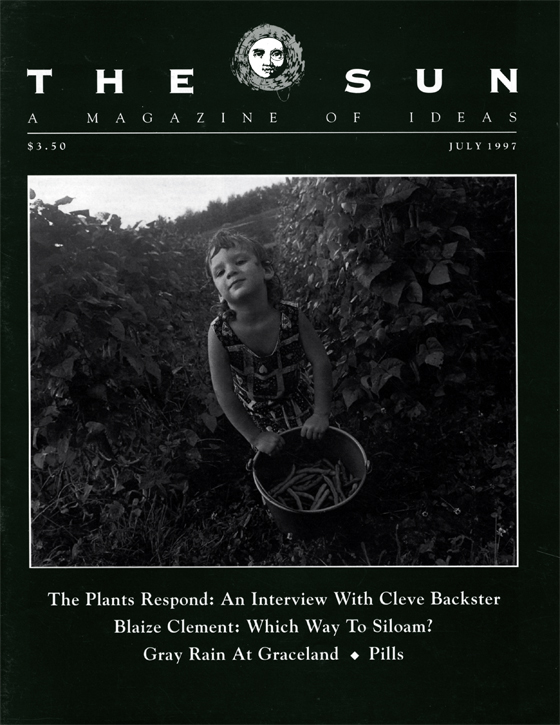 Ode To A Serotonin-Reuptake Inhibitor

Which Way To Siloam?