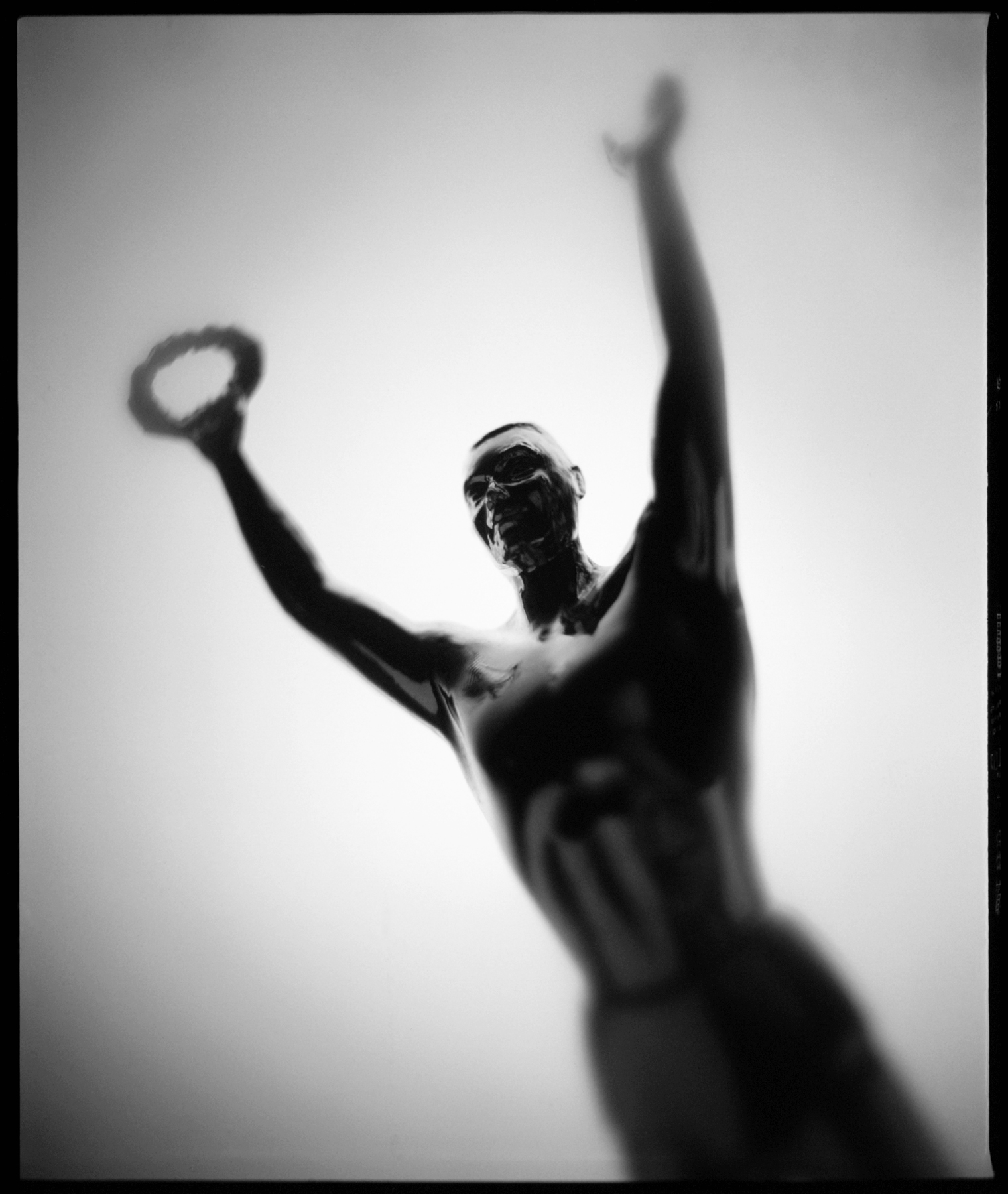 MY FRIEND TOMMY CROTTY, who was a terrific basketball player in New York and went on to play college ball and be a cheerful husband and excellent dad before the idiot who just died in Abbottabad murdered him and thousands of people on September Eleventh, used to call every big guy he ever played with Meat.

Hey, Meat, he would say to the lumbering earnest centers he played with, and hey, Meat, he would say to his tree-trunk power forwards, and even his high-strung small forwards were all leaner Meat to Tommy, except in cases like mine; I started at small forward because guys who were bigger than me couldn’t score if you locked them in the gym for a week, and guys who could shoot better wouldn’t go into the lane to rebound without a helmet and a crowbar, and I could at least convert easy shots and grab uncontested rebounds. So I started up front alongside two Meats, and Tommy ran the point with a succession of reckless gunners at shooting guard, which was a misnamed position on any team Tommy ran unless he trusted the other guard to take decent shots and hit half of them, in which case he would deliver the ball to him like a cake on a silver platter.

He was a most amazing point guard, Tommy Crotty, his name often all one word in the mouths of the coaches and refs and parents and fans who came to watch him slide like a grinning knife through what seemed like every Catholic-school team in the greater New York metropolitan area: tommycrotty! You would even hear this odd word in churches and bars and one time at the police station, where there was a misunderstanding about an automobile until the sergeant realized that we played with tommycrotty, the word reverential in his mouth like he was talking about one of the lesser Apostles. It turned out one of his kids was a ballplayer, and his kid’s team had gone up against our team, and, total respect for you other guys, said the sergeant, but our guys had your number except for that kid at the point, that kid is a magician, I never seen a kid do things like that with a basketball, and he is not the most athletic kid I ever seen either, which was true, Tommy was never going to be six feet tall, not in this life, and he was what even his mom called husky.

One time I asked Tommy why he called all the big guys Meat and he said it was just easier that way, learning their names was pointless because they all responded to the same simple stimuli. They want the ball early, you know, said Tommy. I think to reassure themselves that they exist. So I get each Meat a basket early, and then they’re happy, man. They are not the brightest bulbs in the galaxy. Once they score they are good for long stretches. Meat has short memory. Later in the half I get them another bucket or two each, just to be sure they’re awake. Otherwise I want them working, you know? Not worrying about scoring. I’ll take care of the score, but I need work done out there, and you’re not going to do it, prancing around like a hairy ballerina. At least you don’t yell for the ball, which is why I give it to you when you’re open. Some guys actually yell at me for the ball, can you imagine? Once in a while a Meat will set up his tent in the hole and wave for the ball. I wave back, man. Can you imagine signaling me to give you the ball? You don’t think I know where the ball should go? Jesus. I had a Meat once who was waving for the ball, and I waved back, and his face lit up, and he says hey Tommy! This is why I call them Meat, man. They are not the brightest bulbs who ever lived.

This was how Tommy talked to us in the gym and the playground, but when he was talking to the coaches and refs and parents and fans who called him tommycrotty he used his Altar Boy Voice, all polite and reasonable and thanking the Madonna for what small gifts he had been given, and stuff like that. You could melt butter in the mouth that otherwise pretty much had only the words meat and good game in it. He didn’t talk on the floor at all during the game but afterwards he was one of the few guys I ever knew who made a point of shaking every guy’s hand on both teams and saying good game and actually meaning it, which is rare, most guys don’t mean it at all and they would give you the finger if people weren’t watching.

But what I really want to tell you about Tommy isn’t how he called all big guys Meat; it’s about the time I absolutely hammered a guy on a blind pick in a game, and Tommy said something to me afterwards that I’ve thought about a lot since he was murdered by the idiot in Abbottabad. The guy I clocked had been fouling Tommy the whole game, because basically Tommy was killing his team and the rest of us weren’t, and this guy figured he would cut the head off the snake, you know? So he bashed Tommy every chance he got, setting mean picks, cracking Tommy’s hands and arms while supposedly going for the ball, really dropping the hammer on him twice when he drove to the basket, and one time accidentally on purpose whipping a pass right in Tommy’s face like the ball slipped but it didn’t. Finally the rest of us had had enough, and me and the Meat set up a blind back pick, which is an evil basketball way to exact vengeance on a guy. The guy you are trying to nail comes flying around the Meat pick, a standard high pick he expects and has seen all game, and then runs smack into a second vicious pick which he did not expect, the second pick being me with an elbow aimed at his eye. Well, the guy went down in a heap, and there was a ruckus with coaches and dads yelling, but the ref had seen the way the guy was bashing Tommy, and he figured an eye for an eye, so that was that.

But that wasn’t that, as it turned out, because after the game Tommy read me the riot act, and told me never to do that again, not on his floor, or I would never see the ball again except in the windows of sports stores. He said he understood why we had done it, and he appreciated the thought, but there was a right way and a wrong way to play, and he would be damned if anyone on his team played the wrong way. I asked what about the other guy hammering him and he said screw the other guy, with a guy like that you just play harder and show him the error of his ways. I said that was stupid, that guys like that were idiots, and would never see the error of their ways, and the best way to deliver a message to guys like that was with your elbow in his eyeball, maybe both elbows. You are not listening to me, said Tommy patiently, which is disappointing, you are not Meat, try to pay attention, and remember I have the ball and you do not. There is a right way and a wrong way to play. We play the right way. Guys who play the wrong way will lose in the end. Are you listening to me? Do I have to write this down? The way to teach a guy who plays the wrong way is to play the right way. They want you to play the wrong way. Get it? They are not the brightest bulbs in the galaxy. So the way to really drive them bonkers and make them go home and punch the wall is to play the right way. Firstly it is the only way to play, and secondly it gives them a chance to wake up, although personally I would not bet the house on that. Are you listening to me?

Having played point guard on the basketball team in school, I thoroughly enjoyed Brian Doyle’s essay about his old teammate Tommy Crotty [“Meat,” March 2012]. Doyle brought me into Tommy’s mind and attitude toward his fellow players, which I found both hilarious and insightful. The calm, aloof, matter-of-fact way he ran his team is a sign of a great point guard: he was the boss; the others were the “meat,” period.

This attitude is detached and calculating yet fair, and gives the point guard freedom to operate to maximum efficiency on the basketball court. Ultimately the team benefits. How could anyone object?

Tommy Crotty seems to have been a graceful man. I’m sure he is sorely missed.

Christopher Bittner North Salem, New York
More Letters
What Do You Think? We love getting letters to the editor for our Correspondence section.
Has something we published moved you? Fired you up? Did we miss the mark?
Send A Letter 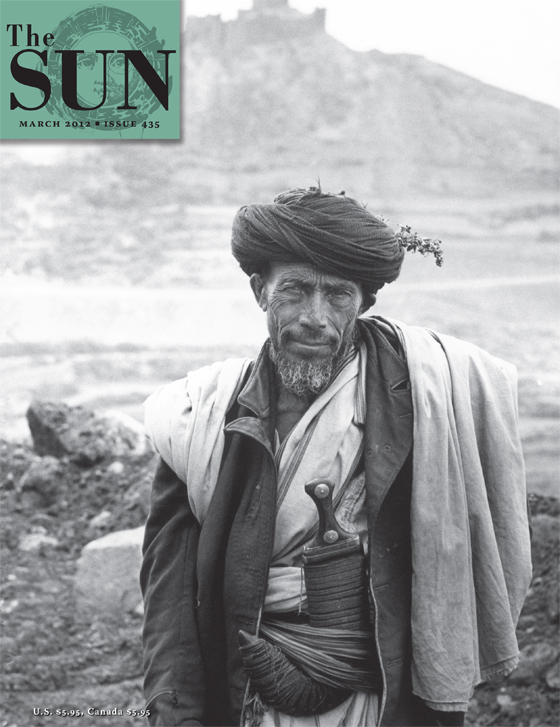 White Lady Of Once A Week

A Castle In Outer Space