On the late-afternoon streets, everyone hurries along, going about their own business. Who is the person walking in front of you on the rain-drenched sidewalk? He is covered with an umbrella, and all you can see is a dark coat and the shoes striking the puddles. And yet this person is the hero of his own life story. He is the love of someone’s life. And what he can do may change the world. Imagine being him for a moment.

And then continue on your own way.

Nothing is stranger or more ticklish than a relationship between people who know each other only by sight, who meet and observe each other daily — no, hourly — and are nevertheless compelled to keep up the pose of an indifferent stranger, neither greeting nor addressing each other, whether out of etiquette or their own whim.

The happiness of life . . . is made up of minute fractions — the little, soon-forgotten charities of a kiss, a smile, a kind look, a gentle word, a heartfelt compliment.

How much larger your life would be if your self could become smaller in it; if you could really look at other men with common curiosity and pleasure; if you could see them walking as they are in their sunny selfishness and their virile indifference! You would begin to be interested in them, because they were not interested in you. You would break out of this tiny and tawdry theater in which your own little plot is always being played, and you would find yourself under a freer sky, in a street full of splendid strangers.

“Sometimes one feels freer speaking to a stranger than to people one knows. Why is that?” . . .

“Probably because a stranger sees us the way we are, not as he wishes to think we are.”

Carlos Ruiz Zafón, The Shadow of the Wind

That’s the thing about flying: you could talk to someone for hours and never even know his name, share your deepest secrets and then never see him again.

My mother used to say that there are no strangers, only friends you haven’t met yet. She’s now in a maximum-security twilight home in Australia.

Sympathy from strangers can be ruinous.

Sometimes you walk past a pretty girl on the street and there’s something beyond beauty in her face, something warm and smart and sensual and inviting, and in the three seconds you have to look at her, you actually fall in love, and in those moments, you can actually know the taste of her kiss, the feel of her skin against yours, the sound of her laugh, how she’ll look at you and make you whole. And then she’s gone, and in the five seconds afterward, you mourn her loss with more sadness than you’ll ever admit to.

I had rather hear my dog bark at a crow than a man swear he loves me.

Beatrice in Much Ado About Nothing, by William Shakespeare

Love is something far more than desire for sexual intercourse; it is the principal means of escape from the loneliness which afflicts most men and women throughout the greater part of their lives.

Whenever someone asks me to define love, I usually think for a minute, then I spin around and pin the guy’s arm behind his back. Now who’s asking the questions?

Love, I find, is like singing. Everybody can do enough to satisfy themselves, though it may not impress the neighbors as being very much.

In everyone’s life, at some time, our inner fire goes out. It is then burst into flame by an encounter with another human being. We should all be thankful for those people who rekindle the inner spirit.

A single act of kindness throws out roots in all directions, and the roots spring up and make new trees. The greatest work that kindness does to others is that it makes them kind themselves. 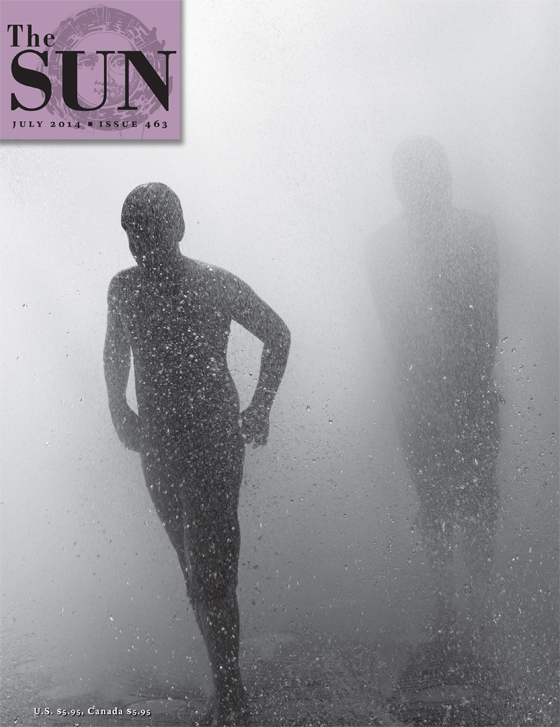 By Chris Dombrowski
The Sun Interview

The One You’re With

Barbara Fredrickson On Why We Should Rethink Love

We Should Do Something

By Laurel Leigh
The Dog-Eared Page

The Genuine Heart Of Sadness