I am helping clean out my friend Sandy’s apartment after her suicide when I open an envelope addressed to me. There are five poems inside. Here is the first:

My friend wrote this poem and four others the week before she killed herself. A year earlier she had tried — with what she’d hoped would be a lethal cocktail of drugs — to end the agony she had suffered for decades. She had chronic pain that nothing seemed to relieve: no drugs, no diets, no physical therapy, no holistic doctors, no spiritual practice, no counseling. Most days it hurt her to move; some days it also hurt her not to move, her skin sensitive even to the softest fabrics.

Fortunately — or so we, her friends, thought — Sandy survived her first attempt to free herself from her tormented and tormenting body. Found on her apartment floor in time, she was left with nerve damage that made her condition even more challenging. Like so many who have attempted suicide, she was released into a public-health system of inadequate physical therapy and overworked psychologists unprepared to help an impoverished poet wracked by physical pain and mental anguish.

We all tried to help. We suggested doctors, drove her to appointments, brought her foods she could endure eating and clothes she could bear wearing. We offered words of encouragement and arguments against hopelessness. We rejoiced that, having survived her suicide attempt, she could hold in her hand her new book, fortuitously titled What Now, What Next: Other Ways to Pray. We begged Sandy to get back to the poetry that had been such a large part of her life. Some of us actually believed poetry could save her.

I must get it right this time, she wrote.

Sandy went to great lengths to make her death easier for us. She made sure to find a quiet place in her favorite park, not far from her beloved herons, and she went there at dusk, when no one would be nearby. As “Last Writes” makes clear, she had already taken a two-hour gun-safety lesson. In her home of two rooms, everything had been neatly organized in preparation: books ready to be disseminated, vinyl records sorted, farewell letters stamped and addressed to each member of our poetry community, a portfolio of recent work to be dispersed, and that envelope just for me, the one with the five poems inside.

I often served as a reader for Sandy’s work, and, as I typed “Grist for the Mill” to include it here, I found myself tempted to make small revisions: outdoor and outside seemed needlessly repetitious, and blanket maybe a tad familiar for a poem dealing with a subject this potent. Here I was grieving my friend’s distressing resolve and the chilling way she speaks of it — as if it were an outing in suede boots on sodden earth — and I couldn’t help critiquing. It’s a reflex I suspect Sandy would appreciate; she was such an expert editor, with a sharp eye for false moves, lazy language, wrong turns. Even with her own books she believed it was never too late to revise.

As the one to whom Sandy bequeathed her “last writes,” I was left with the question of what to do with them. Given the obvious commitment to craft, I refused to see these final poems merely as suicide notes. Should I share them with anyone? Wouldn’t that exacerbate the grief of those who had loved her? I certainly didn’t want anyone suffering from depression to read about Sandy’s act and be inspired to do something similar. Ultimately I came to believe that those who loved Sandy had a right to read her last words. I owed the poems this much: to make sure that they had a chance to be heard.

Poetry did not keep Sandy from that last, fatal act, as her friends had hoped, but it did allow her, at what she knew to be the end of her life, to honor acts of compassion, no matter how small, and to affirm that courageously human ability to recognize irony, even at the cusp of death, even in the hardest tests of will.

I suspect that if she were still with us, Sandy would be ruthlessly cutting that final line about saving a life, so that the penultimate one gets our full attention: without a second thought, I throw the trap away. That second thought applied both to the sparing of the mouse and to her imminent suicide. My friend possessed the inclination and the ability to turn her experience of the world into a language that insisted on delighting in itself.

Sandy’s suicide also made me mad. I was angry with Sandy, who had written poetry instead of calling me or one of her other friends. Had she read the poems to us over the phone, maybe we could’ve talked her out of it.

“Preparing to Die” does not seem a call for help, but rather a commitment to a course of action. Is that why Sandy wrote it: to stay faithful to her determination to undermine the self’s dogged devotion to itself? Of all the five poems, this is the one that frightens me the most. Though I resist what Sandy is arguing for, I must acknowledge both the right and duty of her poem’s words to disturb my equilibrium. I would do the same for Milton’s words, or Yeats’s, or Adrienne Rich’s.

Much has been written about poetry and its superstars but little about the role poetry plays in the lives of so many who couldn’t imagine living without it: the ones who pull their cars over to the side of the road and work on a villanelle in a failing light; the ones who come home at day’s end and go up to their attics to talk in different language than they use at work; the ones who escape their kids or their aging parents to sit at a corner table at a coffee shop and let a sestina invite them to let go sorrow’s ghost.

Having lost her father when she was five, and later having cared for a mentally ill mother, Sandy scraped together a living as a medical transcriptionist and then as an aide for the mentally challenged. Discovering poetry in midlife, she found a passion to which to devote herself and a community that supported her in that passion. By her late sixties she had published four full-length books with one of those small, independent publishers that insist poetry is important to people’s lives — and not just the poetry of those heralded at writers’ conferences, but the work of the unheralded, too, who compose their latest sonnet after coming home from the machine shop or the children’s ward or the supermarket.

W.H. Auden’s famous line “Poetry makes nothing happen” is simply not true. Poetry may not be able to depose a corrupt president or clean our contaminated waters or bring peace to troubled lands — though it has tried! — but, having worked for five decades with poets in prisons, nursing homes, and homeless shelters and at the community college where I teach, I can attest that poetry has brought change for many. It gave a medical transcriber who was barely scraping by a new way of seeing and, with that, a purpose: to bring to everything she witnessed both a sense of wonder and a relentless honesty.

Sandra Becker wasn’t trying to save herself with poetry; she wanted to work with what was at hand, and she did just that, until her dying breath.

I’ve known Chris Bursk for more than twenty years as a humanitarian, teacher, editor, writer, and friend. I also knew my dear friend poet Sandra Becker, whom Chris describes in “Last Writes” [June 2020], for the same amount of time. One would think that reading this essay would have been painful for me, but instead it was a release. Something heavy was lifted when I read Chris’s profound tribute to Sandy’s brutal, forthright poetry.

Only a devoted friend who revered the honesty of poetry could discuss Sandy’s commitment to suicide in her final five poems. No matter how devastating, how disturbing, how painful, Chris stepped aside and allowed Sandy’s poetry “a chance to be heard.”

What a wonderful gift Sandra Becker left behind in her poetry.

I was first touched by suicide when I was barely in my teens: my twenty-eight-year-old uncle took his life. A few years later my brother’s friend took his. Then many others: a friend, a cousin, a close friend’s daughter, an artist in my community, and so on.

I know, or know of, more people who have taken their own lives than who have died from disease. As someone who has battled depression since my teens, I understand how difficult mental torment is, and I have toyed with the possibility of suicide. I don’t look down on those who succumb to the mental and/or physical anguish that leads them to make that decision. It’s their choice. They shouldn’t endure extreme distress for the sake of the people they will leave behind.

I read with considerable interest Chris Bursk’s essay about his friend Sandy’s decision to kill herself. I have led nonprofit organizations that advocate for the right to die with dignity and have personally advocated such for more than forty years.

The way most of us die is not good, with often futile treatments and procedures that only postpone the inevitable, and at great expense. Even with insurance, medical expenses remain the primary cause of personal bankruptcy. Our death-denying culture must realize there are ways to achieve a peaceful, painless death while avoiding needlessly extended misery. Your readers can learn more at www.choiceanddignity.org.

I hope you will continue to publish articles like “Last Writes” to raise awareness of the plight of the dying.

Rev. John Abraham Tucson, Arizona
More Letters
Thank You Your donations helped to keep our ad-free, nonprofit magazine in circulation last year, funding everything from production to distribution. Learn how you made a difference last year. Learn More 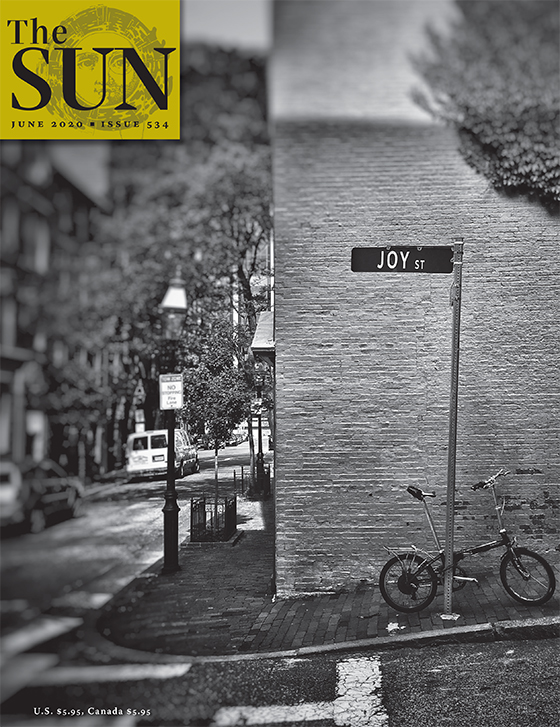 By W.S. Merwin
The Sun Interview

The Power Of Story