What to write about? Myself, again? No, the ego suggests, write about something important: the forced entry of a Central American nation by her rich uncle, prying her stick legs apart; the economy, its “recovery” as convincing as a doddering old man making his way — all on his own! — to the toilet; or perhaps the birth of a New Age, by bloody Caesarean, mother and father protesting loudly — this isn’t what we planned — shiny scalpel twinkling like a star.

But I’m still writing about myself, aren’t I? What can I say about El Salvador that isn’t flavored with the salts and bitters of my days, my ludicrous faith in the rebels, my cynicism about anyone in power (landlords pretending they’re revolutionaries; revolutionaries yearning to be landlords; the landlord’s daughter safe from no one). What can I say about the world that isn’t a mirror of my own heart?

If I see my life as a struggle between good and evil, then I see the world that way: a morality play in which I must choose sides. If I insist that reality match my fantasy about how things should be, which rarely happens, then I see the world as an endless source of sadness — only when things go right do I feel blessed, only when others agree with me do I acknowledge our common humanity.

Objectivity is impossible — not because I’m not honest enough to write what I see, but because I can’t write anything except what I see, and I only see what I already believe. It’s always partial, subjective. There’s no way to separate politics from psychology, who we are on the barricades from who we are in the bed, how we define justice from how we barricade the heart.

For years, I tried to save the world with truth. I knocked down the stone walls of my middle-class upbringing, and there were the paper walls of my good intentions, and the tissue walls of my phony heroics, and the misty walls of the fragrant self, Eau de Ego, my favorite smell. I went through those, and came to the wall of flame: the pain I learned to ignore or repress from the earliest age, scarier than any worldly tyrant. It’s the pain I sensed dimly as I hurried through the rain to the shelter of food or drugs or sex, not pausing to feel the damp or the sting, ending up sheltered and homeless. It’s my parents seen through my child’s eyes, my father’s thunder lips and thunder roar, my mother’s face turned away, so I had to look for it in the face of every woman I met.

I marched for civil rights before I had a glimmering of what it meant to be civil to myself. Vietnam was easier to protest than my mind’s guerrilla warfare, its outposts at the edge of night, its betrayals, its official lies. Shall I say I was socially conscious then, and private now — that my world was any wider, my compassion deeper? The most political thing I do these days is meditate every morning: down those deserted streets of mind I go marching, hardly lacking for a cause. Peace? Here is every enemy peace knows. Pollution? The trash piles up alarmingly: the psychic detritus of twentieth century civilization is right outside the door, stinking to high heaven — but there’s no curbside pickup; I burn it or I live with it, and some of it won’t burn. Crime? You name it: mugged by the past; conned on every corner by the ego in another disguise. And so beset, I wind my way to the center of it all — the plaza of possibility, the intersection of “I” and “am,” where again I’m asked to choose: what’s important, what’s the world? 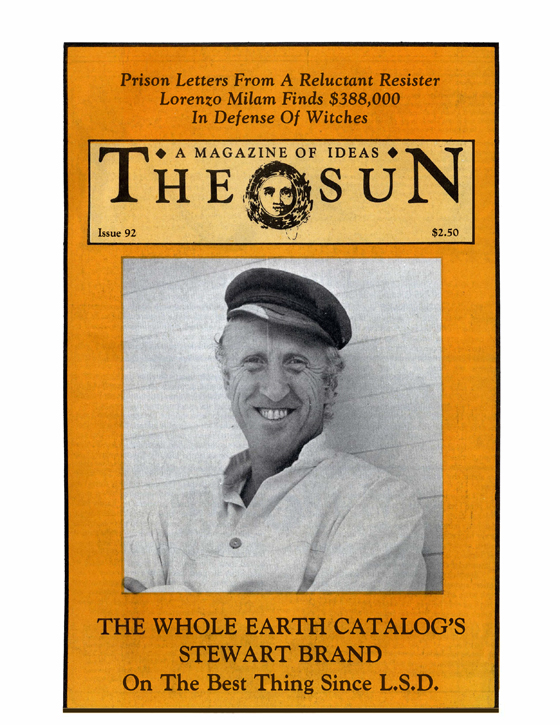 An Interview With Stewart Brand