Most Of All, I Remember Steeplechase | By Karl Grossman | Issue 13 | The Sun Magazine
close

Most Of All, I Remember Steeplechase

First he insults me, tells me I’m not a human being. Well, I tell him — this frog, this polka-dotted frog — that I just can’t control myself in the face of spaghetti. Then this frog looks at me, very seriouslike, and intones: “You’re going to have a great revelation when you’re 62.”

I ask him what it is.

“They’re going to find that they have no money to pay for social security because they spent it all on Big Mac bonds.”

We walk on, me and the frog. I ask his name. It is Sprark. My name is Pierre Platnik. “Platnik,” says the frog, “in a former life you were a turtle.”

(I have always suspected so.)

“How many years of age are you?” I ask the frog.

The frog says that he is having a birthday on May 4, that he is a Taurus, like Charlotte Brontë, that he is seven, a mature age for a basically Green frog. The frog tells me this story of waiting for a funeral cortege to pass by so he can cross the Pasadena Freeway out of Los Angeles but the cortege seems to be six, maybe eight or even eleven miles long — containing 25 per cent of the Cadillacs in Southern California. “Look at that,” the frog says. He gestures with his eyes to this woman so pulchritudinous my eyes bobble.

I promptly say good-bye to the frog and walk over to this woman, undoubtedly one of the most beautiful women who have ever lived.

I take her hand. She is as soft as cream cheese.

We run, very fast. Past a pond, past a lake, past a ravine, past a mountain, and I confide in her that I worry about too many things. She says she knows just what will cure that: shoes that hurt. “When you have shoes so tight that it hurts, you can hardly worry about anything else,” says this exquisite girl, with flowing red hair, skin the texture of peanut butter. So I get shoes that will not fit.

Later on, I am feeling very uncomfortable. I can hardly walk. My feet feel like they’re all going to break out in blisters if I go another step. But I keep worrying about other things.

Until, I come to this conclusion: I am a throwback to a prehistoric animal.

This is all in the way of a preface on communication.

As they say, thriftiness in communication is as important as in life. I am very thrifty.

You can tell the future by examining your shit.

There are two kinds of communication: overt and covert. Overt is like, facts. Like telling someone: “Nice weather today, huh?” And he replies: “Sure is.” And you say, “Haven’t had a nice day like this for some time.” And he replies: “That’s the truth.” Etc.

An example of cosmic communication follows: “That frankfurter was somebody’s mother,” she says. “What do you say I take out your appendix, you don’t need it anyway,” he mentions. “You guys are into perversion,” she says. “Being on the wrong path is not so bad,” he says.

Websters might say communication is “intercourse by words, letters or messages” but we all know well what goes on there behind the cloistered concrete of Merriam-Websters in Springfield, Ma.

Are words necessary for communication at all?

Once I started a business, I thought it would prosper: merchandising cunt-flavored yogurt. I went broke. I had not a cent. I was sharing our last three cans of Alpo dog food with my dog, Arthur. Arthur wanted a bit more, I gave him some with the teaspoon we were using. Then I took a little bit. Didn’t want to take much. Wanted to save as much as we could. My only possession was an electric fan. I took it to the pawn shop. They say they would give me 45 cents for the fan, but I knew I would then be very hot. I thought about it, and thought about it, standing there in front of the glass case holding rings and watches and saxophones and wrestled over the decision.

Often when I meet people I will begin the conversation with: “And where is your hat?”

This finds people off guard. They will say: “But I don’t wear a hat.”

And I will say, “I’m sure the last time I saw you you were wearing a hat.”

And this can go on for 10 minutes, sometimes 20 minutes. What kind of communication is this?

This is klutzy communication.

Some people think the eyes are the true communicator of the body. Some people say it’s the mouth. I personally subscribe to the opinion that it is the navel.

The navel, you know, sees all, feels all, smells all.

There will only be true communication on this earth of ours when navel to navel we face.

I have learned this through the practice of meditation.

After the first hour of my first meditation I felt: “I have to piss.” This feeling, through the years of study, passed away (not altogether) and I have learned to center, with precision accuracy, on my navel. It is through your navel that you are plugged into the cosmos, as you were once plugged into your Mom, and this is the central energy point on your body, except for your left elbow which is an erogenous zone of infinite sensitivities.

The navel doesn’t use words.

The navel doesn’t know from words.

Many years later they would say: He was an ape man, but kind to kids. 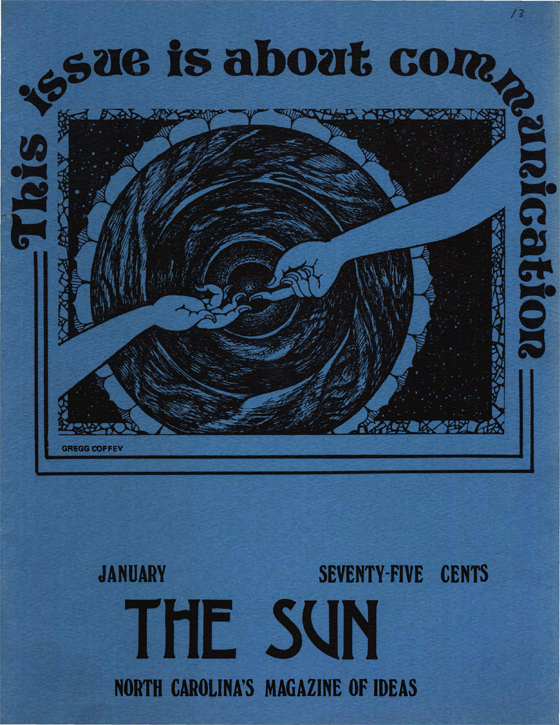 Back To The Front Page