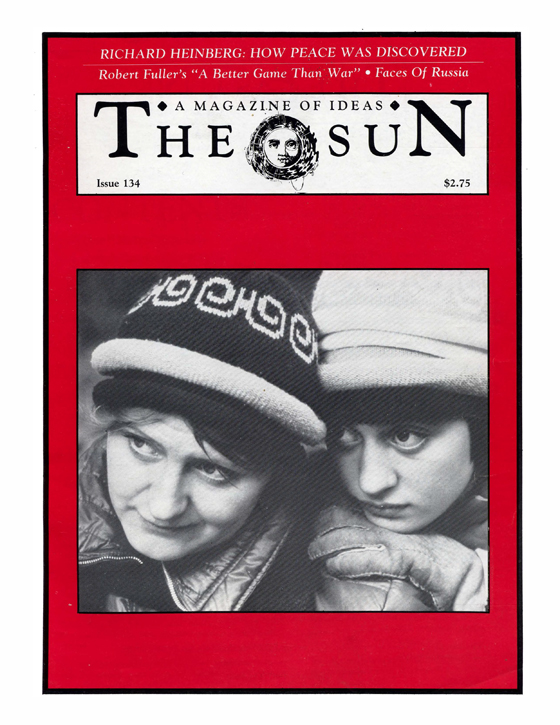 Playing board games, returning a rented cap and gown, counting the days

All truly wise thoughts have been thought already thousands of times; but to make them truly ours, we must think them over again honestly, till they take root in our personal experience.

A Better Game Than War

An Interview With Robert Fuller

In short, the activities that outmode and replace war must deal with incompleteness, whether it be of the body, mind or soul. No one activity embodies all these aspects. Nonetheless, to deal with want in any of its forms is to move toward bypassing war; and conversely, not to deal with want is to court war. We begin to see the outline of another grand human game on the horizon, coaxing us away from the thrills of the battlefield. It is the discovery and completion of one’s own self as experienced in one’s culture, and one’s self as manifested in one’s supposed enemy or shadow.

Through The Eyes Of A Citizen Diplomat

Russians are better informed about Americans than Americans are about Russians. They study this country more systematically than we do theirs. There’s much more news on Soviet television about life in the U.S. than there is news in the U.S. about life in the Soviet Union. A lot of it comes through the propaganda filters of the Soviet bureaucracy, but that’s offset by the direct experience that Russians have when they meet Americans. They may be told in political cartoons that the American system is out to get them, but they make a distinction between the American government and the American people.

How Peace Was Discovered

In the fifteen years since the Great Destruction we have come far: not only have weapons been put aside, but governments and institutions have themselves become virtually meaningless, and the assumption of individual responsibility for wholesome, healing function is virtually everyone’s concern and priority.

On Being A Wonderful Father

I was being a wonderful father at the expense of my son. I think of all the other parents in the world who push their children into things in order to compensate for their own inadequacies. They are also often known as wonderful parents. I wonder what their children think.

Her fingers caressed her statue. She pressed her thumbs into the woman’s forehead. Her beloved clay was soft and cool and oily. Her mother had willed her the clay. Heritage clay. Ninety years old. “It will mold your life,” her mother had said. Now Dorothy’s life threatened the clay. Her hand was too heavy.

I spend a lot of time thinking up improvements on God. When Frank thinks I’m busy typing letters, I’m actually preparing my list. Frank is my boss, the pastor of a large church. He is rotund, and endlessly talkative.