John and I work in the old yellow house on West Rosemary Street, where The Sun and Lunar Graphics are located. We’re an odd couple, the kind of friends thrown together by circumstance. He’s intelligent, articulate when he wants to be, but shy, and tends not to talk much about himself. I’m more expressive and outgoing, more emotional — to a fault, John suggests. But, for the most part, we get along. After all, we share some overriding concerns. He, too, left New York in search of a life, not merely a living, reasoning that success has to do less with money than with happiness and the independence of working for yourself.

Sometimes, while waiting for the morning coffee to brew, we talk of these things, if we’re not too busy — he, with his typesetting and design business; I, with The Sun’s endless demands. Sometimes, days go by without much being said. We’re like neighbors who meet rarely over the back yard fence, but keep an eye on each other nonetheless.

What was it John saw when he looked my way a few weeks ago? Just how much do people speak to each other without speaking? What do our bodies say, brushing past each other in the hall? What do they whisper of our sorrows and fears?

Maybe he didn’t see anything, but was prompted by some odd inner summons to leave that article on my desk. John rarely gives me things to read, but friends are often unwitting messengers, their unsuspecting words or gestures uncannily telling us what we need to hear.

In any event, the timing was precise, the message unmistakable. The article was by a local businessman who turns away customers to have more time for his family and for himself, who disdains conventional notions of work and success. He wrote of staying small “not because I couldn’t get the business, but because it would have changed me in ways I didn’t want to change.”

Did I need reminding that life is more than our accomplishments; that all our accomplishments are here, then gone, like a breath that fogs the glass? Buildings crumble; lovers part; everything born dies. How odd, this striving to be successful, here between the breaths.

How odd, and how human. I, too, disdain worldly success; but my own ambitions — to be a better writer, a better editor — create the same pitch of self- absorption, drive me to the same brink of exhaustion as the investment banker who falls asleep with a calculator in his hand.

On the same morning John put the article on my desk, I’d gotten up hours before dawn to finish my latest essay. Since my deadline was fast approaching — and it takes me forever to turn the inchoate inspirations of my right brain into sentences my left brain won’t condemn — I decided to stay at home and devote the whole day to writing, free of phone calls and interruptions, little counting on how big an interruption I myself would become.

For several weeks, I’d been troubled by a tightness in my chest — a subtle pressure, as if someone’s hand were resting there — and difficulty taking a full, deep breath. The sensation would come and go, for reasons that continued to elude me. I rarely felt it when I ran; sometimes, though, I’d wake up and my first breath would be labored; other times, I wouldn’t feel it until late in the day.

It wasn’t the first time I’d had this problem. Years ago, after splitting up with a girlfriend, I developed the identical symptoms. Thinking I was having a heart attack, I rushed to the clinic, to be assured my heart, though wounded, was quite healthy, and that I’d live to hurt again. What was wrong with me, then? Nothing physical, the doctor said; it was anxiety. It was my own troubled psyche pressing down on me, giving me no room to breathe. Threatened by my feelings, I had imagined my very life was in danger; in a way, of course, it was. The life I’d known, with this woman, was over. Yet how hard it was to accept! How many times we die, broken with loss — yet, instead of mourning our losses, we deny them. We betray our feelings, then — surprise — our bodies betray us.

Over the years, like a troublesome visitor who shows up at my front door without any warning, the symptoms return, for days or weeks. Breathing becomes a puzzle, a science I haven’t mastered. I don’t cough or wheeze; I just can’t seem to get enough air. The sensation is oppressive; so, too, is the burden of figuring out why, in its infinite wisdom, my body does this to me. Sometimes, the answer is evident; sometimes it’s a mystery I can’t penetrate — the emotions too painful, the denial too great.

On the day I stayed at home — a sultry, humid Friday in early June — I sat looming all morning over my little empire of scribbled notes and paper and pencils and coffee, while my impending deadline, my lord and master, loomed over me. I’ve lived with deadlines most of my life — as a student; as a reporter; and now, as editor of a magazine devoted to the human spirit, a magazine that transcends time yet is bound by it. I celebrate life with one eye on the hour hand, my time as committed as I am — or so, on the busiest days, it seems. Being too busy to curl up at night with a good book instead of a stack of manuscripts; too busy to get a full night’s sleep; too busy to take a day off to wander in the woods isn’t what I had in mind when I started The Sun. I meet my deadlines. As Stephen Gaskin put it, I keep the toilet paper dry. But too often, in the service of some higher purpose, I neglect my needs. I ignore my body’s rhythms; its subtle (and not-so-subtle) deadlines; its fervent summons, its whispered plea, to pause, to rest, to reflect.

As I labored over my essay that morning, my breathing became more and more burdened, distracting me from the writing. I was dismayed. Breathing should be effortless, joyous — like a slender reed, swaying in the wind. Instead, it was a weight, a worry — each breath like a rusty swing, banging against something unyielding, its arc never completed, my lungs never full.

I got up from the desk and lay on the bed. It’s the lack of sleep, the coffee, the anxiety, I reasoned — half-hoping the diagnosis itself would dispel the symptoms, but they only got worse. I tried harder and harder to take a deep breath — expanding my chest, inhaling forcefully, trying to will the air inside — but it was all to no avail. No longer able to ignore my distress, feeling helpless and frightened, I began to panic. What for weeks had been worrisome, a gathering storm on the horizon, was now raging all around me. Thoughts flew like branches snapped by the wind: God was punishing me; I was going to die; maybe I wouldn’t die but would go on suffering, forever uncertain why.

Try to relax, my wife implored. She said I was hyperventilating, which was making me lightheaded and anxious. You’re right, I said, but kept on gasping, unable to calm down.

Tenderly but emphatically, Norma continued talking. God doesn’t punish us, she said — but the words made no sense to me. You’re not going to die, she said — but the fear drowned her out. Like a tornado destroying everything in its path, the fear laid waste to reason. It was a monstrous machine with its own momentum, mowing me down.

And down I went, terrified and cringing, into some wild part of me, the lip of madness, a roiling darkness where words didn’t matter, where all that mattered was one thing only: not to die.

Norma stared at me as I leapt from the bed. I knew where I was going; I knew it without thinking — the way an animal moves without faltering, the way a cry rises from the chest. I knew, as I clambered down the stairs and burst out the door, that I needed to be outside — out of the house, out of my mind, out of the life of the mind that had become so airless. What I longed for in that moment, with a wild desperation, was life, not my symbols for it. I wanted the dark earth that grew things, the sheltering trees and their shadows, the grass, the leaves, the thick summer air. I ran to the garden — Norma’s garden, where, too busy for gardening, I rarely ventured. I sank down on my hands and knees, and buried my hands in the soil. It wasn’t “nature” I wanted, not some abstraction, but the sustenance, the strength and comfort of the living earth itself. And there, in the dirt, on my knees, sobbing, I was able to breathe again.

Two months have passed, but that day is still vivid, luminous with lessons I can’t forget. It was, most obviously, a reminder to stop pushing myself — to drink less coffee, get more sleep, spend more time away from my desk. It was a reminder to stop mistaking words for what they mean — the menu for the meal, as Alan Watts put it — to stop living in the mind, spending all day in rooms with clocks and calendars, confusing earthly life with its symbols and signs. It was a reminder that I can’t breathe if I neglect my feelings; the truth is, though, my busyness isn’t to blame. It’s fear, not busyness, that divides me from myself, dictating which feelings I’ll have time for, which are too dark to embrace. Cut off from dreams and reverie, from the life of the body, I let myself become the means to an end. I gave at the office, but gave too much, giving what wasn’t mine to give. 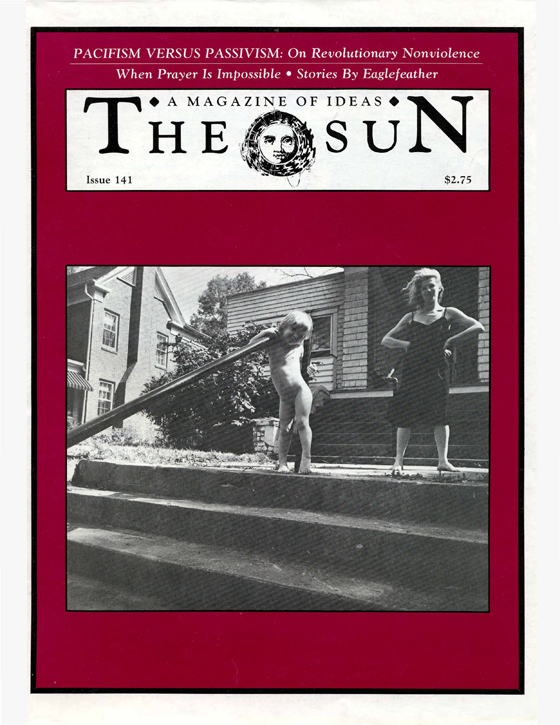 When Prayer Is Impossible