It’s the heart of our kitchen — an ordinary table, made of sturdy pine boards, solidly joined, built to last. Though it’s scarred and scratched, Norma says she likes it that way; she wants to read our history on it, the way you read the lines on someone’s face.

The table is the mirror of our domestic order, and disorder: the meals we eat with our mismatched silver; the children doing homework; Norma kneading and pounding dough into bread; the late-night talks about the uncertain future; the games of backgammon and chess. It’s where we gather with friends, as we did recently: we were finishing dinner, the kitchen rich with the mingled aromas of garlic, oil, the wood fire in the next room, the children’s freshly-washed hair, all the smells that belonged to the house as we belonged to each other; family and friends talking and laughing, a circle of human warmth in the darkness of a winter night — when the talk, unexpectedly, turned into a discussion; and then, with unmistakable emphasis, into an argument; and then, dismayingly, into an argument about arguing itself.

Does it matter how it started? How do you trace an argument, which never follows a straight line? Someone says something which lays back the scab of an old wound; hurt turns into anger; emotions loop around each other, past and present incestuously entwined.

We had been talking about something in the news, about distant lives made suddenly important, symbolic, a focus for our passions and beliefs. A woman had been told her baby wasn’t going to live. Doctors said it was anencephalic — most of its brain was missing — and there was nothing they could do; such babies die within hours after birth, as one organ after another fails. But the mother had insisted that the baby be kept alive on a respirator — even though it had no chance of surviving — until another infant needed one of its organs, and a successful transplant could be made. God had told her to do this, she said; it would mean her baby wouldn’t die in vain.

Would the baby suffer as a result? No one around the table knew. Opinion was divided over whether any suffering was justified, however slight; opinion was further divided over the thorny issue of organ transplants, and the social and moral dilemmas modern medicine inspires. Medical technology has created new heavens and hells for the sick and dying — and a surreal limbo, in which souls may hover for days, or years, teasing death. But who knows what price we pay for such miracles? Prolonging life, postponing death, we are in the realm of the gods, but our understanding of life and death is hardly godlike. Medicine sees the body as a machine, with interchangeable parts; disease is a breakdown of the machine; the doctor’s job is to fix it. But to see the body this way keeps us from apprehending who we really are: not just body but mind, not just mind but spirit, with our salvation riding on something more profound than the latest medical advance.

The longer we talked, the further we strayed from the subject. Invasive procedures, dangerous drugs, the tubes and monitors and scanners of the modern hospital — these aren’t just the province of science but of magic, and of politics, since we all bear the costs. So politics came into it, and religion. Of course, it’s all politics, if you believe in politics; it’s all religion, if you believe in God: are ghastly birth defects accidental? Do we choose the circumstances of our birth, and death? . . . Thus did we toil, in the stubborn ground of each other’s doubts and convictions, digging ourselves into a hole. I called one friend’s thinking “naive” and “simplistic”; that, she said, sounded “just like a man.” Soon, we were arguing about our injured feelings. Feelings are bruised, I said, whenever people argue. It’s regrettable, I said, but inevitable. All that’s inevitable, my wife sighed, is that everyone loses when you argue right and wrong.

Instead of letting the conversation die then, of natural causes, I hovered over it, like a physician with nervous hands. If I had been uncertain, earlier, about the deeper mysteries, I suffered no doubt about the virtues of a good quarrel. An occasional argument seemed to me essential to friendship, to marriage, to democracy itself. If you can’t bite, Theodor Reik said, you can’t kiss; if you can’t curse, you can’t bless. The honest force of an argument, I argued, was tonic; a healthy intellectual life was impossible without the dialectic of opposing ideas, the heat of vigorous dissent.

The insight moved no one; indeed, it started us on yet another round. Why, my friend wanted to know, was I being so aggressive? Couldn’t I acknowledge the validity of more than one point of view? Not if the other point of view didn’t make sense, I insisted. But, my wife said, you have to respect other people’s feelings, even when you disagree with their reasoning. Then how, I wanted to know, could you ever argue passionately about anything? Don’t we offend the racist’s feelings when we speak out against apartheid? Isn’t talking with each other, arguing with each other — even offending each other — in the service of truth, more important than the sanctity of feelings?

The more we argued, the more defensive I became. I had staked out a high ground, made my camp on a narrow ledge with Truth, but did I want to spend the night up there? To be arguing against the integrity of feelings, against the tenderest regard for another person, made no sense to me. Besides, shouldn’t I know better than to trust a concept as lofty as Truth, to trust it more than the wounded look of the woman across from me? The mind creates the abyss, someone has said, and the heart crosses it. What was I making more important than love? I didn’t know.

I didn’t want to be a bully. I knew better than to insist my experience was more valid than hers. That always leads to some kind of violence, the I, me, mine of history, the endless feud. But I was too sullen to acknowledge this. In that dark chamber of my heart, where I confuse being right with being loved, I was reaching for agreement, for approval, like a child reaching for an outstretched hand. To feel hurt because friends disagreed with me — to feel that because they didn’t cherish my opinions, they didn’t care about me — was absurd, my mind insisted, too absurd to admit.

Instead, we said goodbye. Norma and the children went to bed. I sat at the table alone, staring at the immense darkness outside the window, then at my own stubborn face in the glass. 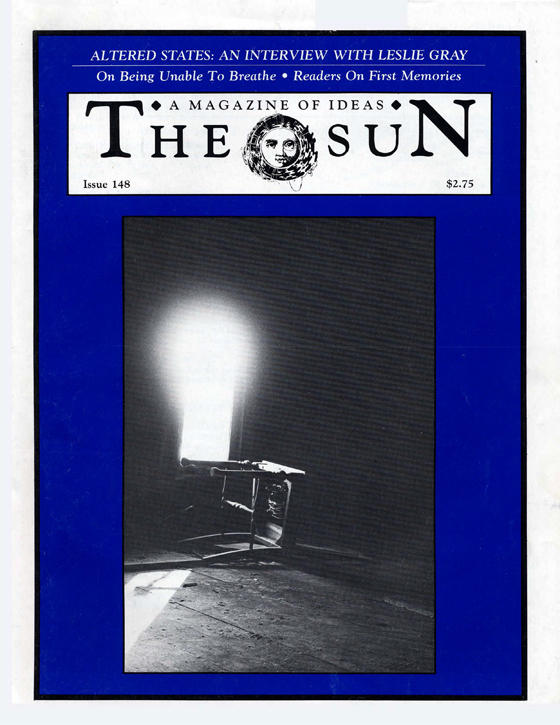 On Being Unable To Breathe

The Child In The City

From A Distance, Paradise