getting to know HIM

This is a chapter from William Penrod’s as-yet-unpublished novel, A Beer Drinker’s Story: The Mama’s Boy.

Penrod describes it as “a comical look at a would-be writer, a beer-drinking dreamer, a fantasist in the extreme, living in the heavily-industrialized region that is northwestern Indiana, and his attempt to write the book that, he believes, will bring him certain fame and fortune.

“When all attempts to fit himself into the local industry fail, he begins living in an abandoned passenger station, where he continues to write the book until he is arrested for stealing lunch buckets and taken to the City Jail, where he is, naturally, suspected of committing every crime in the book and then some.

“The Lana in the novel is the Lana, come to him in fantasy from Hollywood early in the book. She remains with him throughout.”

Penrod is looking for a publisher.

When Lana left I still kept on talking to Him every day.

He was never IN when I did but I was able to get a lot of information about Him from the Fiery Finger that appeared and wrote on the wall of my cell.

“I just wanted to talk to You,” I started out the first time I talked to Him from the City Jail after Lana left, “and let You know that I’ve really made up my mind to become a better person now.

“Yes, I’m really determined to become a better person now. That’s all I wanted to tell You.

“Of course, if You want to guide me or something I’ll really appreciate it.

“But, You don’t have to do anything and I’ll understand too.

“I wouldn’t blame You if You didn’t want to have anything to do with me anymore either.

“I know I’ve done a lot of wrong things in the past but that’s all over now.

“I know I’ve really messed things up good again this time too but I promise I’m not going to do that anymore.

“I’ve really made up my mind to become a better person now.

“That’s all I wanted to tell You.”

Then that Fiery Finger appeared and wrote on the wall of my cell for the first time.

And He never got back to me.

“I don’t want to bother You,” I said the next time I talked to Him, “but I just wanted to tell you that I still believe in You.

“That’s all I wanted to tell You.

“That I still believe in You.”

Then that Fiery Finger wrote:

And again He never got back to me.

“I was wondering. Did you get my message? That’s all I wanted to know.

“Did you get my message?”

Then that Fiery Finger wrote:

And He never got back to me then either.

“I know You’re busy,” I said the next time I talked to Him, “and I don’t want to bother You but I just wanted to know if You’re OK.

Then that Fiery Finger came and wrote:

“He was supposed to get back to me when I talked to Him before,” I let the Fiery Finger know before it could disappear, “but when he didn’t get back to me I just started wondering if He’s OK.

“I know He’s always busy and always has a lot of things to do. I know He could be out causing an earthquake or doing some of those other things He’s always doing and that’s why He never got back to me.”

“When He didn’t get back to me,” I said then, “I just thought He was out causing an earthquake or a hurricane or a tornado or a tidal wave somewhere.”

OHHHHH, NO. HE HATES EARTHQUAKES AND HURRICANES AND TORNADOES AND TIDAL WAVES.

HE’D NEVER CAUSE AN EARTHQUAKE OR A TORNADO OR ANY OF THOSE OTHER TERRIBLE THINGS.

“Why didn’t He get back to me then?” I asked the Fiery Finger then. “That’s what I want to know!

“Why didn’t He get back to me?

“He’s never IN when I talk to Him and He never gets back to me either!”

OHHHHH, THE METS WERE IN TOWN THE LAST COUPLE WEEKS. THAT’S PROBABLY IT.

HE NEVER DOES ANYTHING WHEN THE METS ARE IN TOWN.

“He likes watching the Mets?”

OHHHHH, YES. HE LOVES WATCHING THE METS. THEY’VE ALWAYS BEEN HIS FAVORITES.

YOU KNOW, HE’S NEVER MISSED ONE GAME YET.

“You mean He was watching the Mets play and that’s why He never got back to me?”

YES, BUT HE DOESN’T LIKE LEAVING THE CITY ANYWAY. ACTUALLY, HE HASN’T BEEN OUT OF THE CITY FOR SOME TIME NOW.

HE NEVER LEAVES THE CITY UNLESS IT’S REALLY SOMETHING IMPORTANT OR THE METS ARE ON THE ROAD.

YOU KNOW, HE ALWAYS TRAVELS WITH THE METS ON ALL THEIR ROAD TRIPS.

OHHHHH, YES. IT’S HIS VERY FAVORITE PLACE. HE SAYS THEY HAVE EVERYTHING HE COULD EVER WANT TO WATCH RIGHT HERE.

HE ALWAYS HATES IT WHEN HE HAS TO LEAVE AND GO SOMEWHERE ELSE FOR SOMETHING.

“What does He do there, just watch the Mets?”

“Well, what does He do there?”

WELL, HE LIKES TO WATCH FRED ASTAIRE DANCING BUT OF COURSE EVERYBODY DOES.

HE’S ALWAYS BEEN FOND OF CAGNEY’S DANCING TOO BUT HE REALLY LIKES WATCHING DANCERS.

ALL KINDS OF DANCERS.

“Is that all He does, just watch the Mets play and watch dancers?”

WELL, HE LIKES TO WATCH STAND-UP COMEDIANS AND BRICKLAYERS. HE THINKS THEY’RE WONDERFUL.

OHHHHH, YES. AND IRONWORKERS AND CABDRIVERS AND GARBAGE COLLECTORS TOO.

HE THINKS THEY’RE ALL WONDERFUL TO WATCH.

YOU KNOW, EDGAR BERGEN AND CHARLIE MCCARTHY WERE HIS FAVORITES. . . .

AND HE LIKES TO WATCH TRAPEZE PERFORMERS AND ACROBATS AND FEMALE IMPERSONATORS TOO.

“He likes to watch them?”

OF COURSE. HE THINKS WHAT THEY DO IS WONDERFUL. HE’S ALWAYS AMAZED BY WHAT THEY’RE ABLE TO DO.

“Then he doesn’t go around causing earthquakes and doing terrible things like that?”

OHHHHH, NO. HE HATES EARTHQUAKES. HE’D NEVER CAUSE AN EARTHQUAKE OR ANYTHING LIKE THAT.

WELL, HE LIKES TO WATCH CLEVER BANK ROBBERS. THERE’S ONE THAT HE REALLY ENJOYS WATCHING.

LOUIE . . . THAT’S HIS NAME. LOUIE, THE BANK ROBBER. HE NEVER CARRIES A GUN AND HAS NEVER HURT OR EVEN SCARED ANYBODY AND HE’S EVEN ROBBED THE SAME BANK SEVEN TIMES IN ONE WEEK ONE TIME AND NEVER HURT ANYBODY.

OHHHHH, NO. LOUIE THE BANK ROBBER NEVER HURTS ANYBODY. AND HE’S ALWAYS SO POLITE.

LOUIE ALWAYS SENDS FLOWERS TO ALL THE TELLERS WHEN HE GETS THROUGH PULLING A JOB.

NO, HE NEVER GETS MAD AT LOUIE.

MATTER OF FACT, HE’S BEEN WANTING LOUIE TO CLEAN OUT AN ARMORED CAR.

HE THINKS HE COULD GET AWAY WITH IT.

“Is there anything else He likes to watch?”

OHHHHH, YES. THERE ARE SEVERAL THINGS. HE LOVES TO WATCH A GOOD IMPRESSIONIST. HE’S ALWAYS ON THE LOOKOUT FOR SOME GOOD NEW IMPRESSIONIST.

HE’S JUST BEEN SO BUSY. HE’S BEEN MEANING TO GO. HE FEELS REAL BAD THAT HE HASN’T GONE IN SUCH A LONG TIME.

WELL, TO TELL THE TRUTH, HE’S ONLY BEEN TO CHURCH ONE TIME. HE SAID IT SEEMED SORT OF NICE.

HE FEELS REAL BAD THAT HE’S NEVER GONE BACK YET. HE SAID THAT IT SEEMED SORT OF NICE.

WELL, THAT DEPENDS ON WHAT HE’S DOING. MOST OF THE TIME WHEN HE’S AT A BALL GAME HE’LL LOOK LIKE YOGI BERRA OR MICKEY MANTLE.

BUT IF THERE’S A CRAZY CROWD OUT THERE THEN HE’LL JUST LOOK LIKE HULK HOGAN OR MAYBE MR. T.

OF COURSE, THE WEEK THAT HE FLIRTS WITH ALL THE HOMELY GIRLS EVERYWHERE HE ALWAYS LOOKS LIKE CARY GRANT.

HE LIKES LOOKING LIKE YOGI BERRA THE MOST THOUGH.

IT’S HARD TO SAY FOR SURE. I THINK TODAY COULD BE HUNGARIAN BAKERY DAY. HE LOVES TO GO INTO HUNGARIAN BAKERIES AND WATCH THEM MAKE BREAD AND ALL THOSE WONDERFUL PASTRIES.

HE REALLY LOVES THE SMELL OF FRESH BAKED BREAD AND IT GIVES HIM A CHANCE TO LOOK LIKE BELA LUGOSI TOO.

HE ALWAYS ENJOYS THAT.

“What other kinds of places does He go into?”

HE ENJOYS DOING THAT.

“What does he look like when He goes into a deli?”

HE ENJOYS LOOKING LIKE RODNEY DANGERFIELD AND MEL BROOKS A LOT TOO.

MEL BROOKS CRACKS HIM UP.

HE REALLY LOVES THAT BUT HE’S BEEN SPENDING MORE AND MORE TIME LOOKING LIKE BETTE MIDLER TOO.

HE REALLY LOVES THAT TOO.

“I guess He is busy most of the time.”

“Will you give Him a message for me?”

“Tell Him that I’m still here in Hammond.”

“Tell Him that I’d like to talk to him the next time He comes out this way.”

“Tell Him that I’m glad that He doesn’t cause earthquakes or any of those other terrible things.”

“Tell him that He can guide me anytime He wants to.”

“Tell Him that I still believe in Him.”

“Don’t forget. Tell Him that I still believe in Him.”

“And tell Him that I hope that I haven’t bothered Him too much.”

The Sun has published two additional excerpts of Penrod’s novel: “The Renewal” and “Orson and Me.” 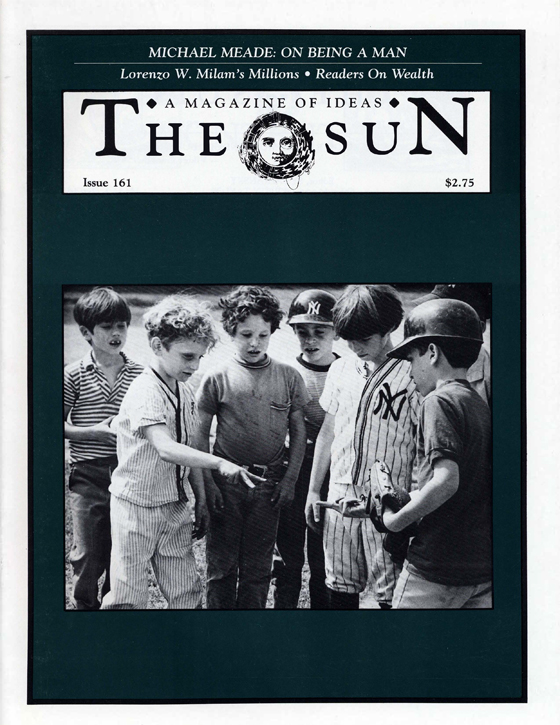 Bearing Up In Winter

By Richard Hoffman
The Sun Interview

On Being A Man

An Interview With Michael Meade