Long Ride Into The Sunset

Bill Gaither sent this to us a couple of months ago. Wallace is less mentioned these days, but it’s rumored that Reagan is still in the running. Meanwhile, Jimmy Carter prays 25 times a day. Wouldn’t you?

The rigidly held prejudices and openly opportunistic public posturings so common among the old men who lead or want to lead this nation are a constant source of fascination to me. My own grandfather is a kindly old gentleman who exists in a quiet, courtly manner and is far above ever selling me out in his own interests. This enormous disparity between my own father’s father and those who claim spiritual ancestry with George Washington accounts for part of the amazement. The rest of my consuming interest clearly has to do with liking a good show and the naked lusts of these panting geriatrics is just too obscene to pass up. So it is that my attention is drawn to Ronald Reagan and George Wallace as they go through their spirited bicentennial hustles in an effort to become top banana.

The similarities between the two become more obvious with every passing day. In the best of years trying to be something special to every voter is possible only if the candidates are willing to tenant farm the same fallow territory. In the present race, crowded as your average New York City welfare office, the closeness of these two hopefuls, hemmed in on all sides by the liberal horde, must be positively confusing to their followers.

First of all, both have pasts so improbable for presidential aspirants that even the mindless sorts of rabble attracted to them are hard pressed to forget: Wallace the crowd-baiter with his abysmal record in race relations, Reagan the crowd-borer with fifty cinematic turkeys during his most creative years. Both share remarkably similar postures as the untainted outsider who will clean up the sinkhole of Washington by returning federal power firmly into the hands of local chambers of commerce and reducing the capitol to the status of Baltimore suburb. George is somewhat ahead on this account as his incredible ineptness as governor of Alabama clearly shows him to be agin’ government in any form. Each of these gentlemen have lots of money without holding steady jobs which gives them plenty of time to expound on the virtues of the work ethic. Finally, both not only believe in a God who wears American Legion caps and Rotary Club pins, but would have us know that they have managed to enlist Him as campaign manager.

Given the utter contempt in which I hold each of these characters it is very possible to carry the game of similarities too far, mostly by taking them seriously. Obviously this is impossible. After all, for a couple of austere states-righters, both are doing the Patomic two-step as frenetically as the rest of the right honorables and quietly cashing in on matching federal funds. The long arm of bureaucracy doesn’t count when it comes to handing out campaign funds.

So it goes. Growing up in America is nothing if not an exercise in learning to expect political contradictions. Our hunger for a respectable leader results in the national mind clicking off every fourth year as we forget the more idiotic utterances of those who would lead us. Quick now, what ex-governor of California once said that citizens should “pay taxes until it hurts” and later was forced to admit he had paid none? You know, do you? Well then, who is the current Right to Life champion who signed into law one of the nations most liberal abortion statutes? Only a few more hands go up? For the rest of the class so no one goes away empty-handed, one final question. Name the man who proposed a 90 billion dollar tax cut in the federal budget.

Even Gerald Ford knows the answer to that one and while he might veto funding for school lunches he would never touch Social Security. Ronny, it seems, forgot that a big chunk of his 90 billion was keeping a whole lot of Republican grams and gramps alive. The thunder of canes that greeted his proclamation will echo in his ears for months to come.

This is a very amusing scene to me and thus far into Insanity 76 has a clear lead over George’s revelation that voting for him would approximate a “barbed wire enema” for Washington insiders. One assumes that this lifts him to the lofty station of political enema-bag, but in a following heavily populated with anal-expressives this is probably an asset. It is here, in the nether regions of grass-root support, that the two begin to show their differences as they polarize the expressive and retentive elements of the electorate. To further the schism, Wallace is so quadra-annually crude and Alabama so totally mired in the wallow of his particular vision of home rule that it sometimes seems he is taken seriously only by those who positively glory in backwardness. Given the composition of America this attraction could result in a staggering plurality at the polls if it was not for the fact that George is, in everyone’s mind, a perennial loser. Even the most cultured admirer can imagine him as no more than a modern Don Quixote jousting with ethnic wind-mills from the back of a tractor with a bull prod.

Ronny, on the other hand, is a fresh face at sixty-five years old (itself a telling comment on American politics), is untainted by defeat and comes from a large state that is no worse off than any other and much better off than New York. On the surface, his turn of the century Industrial Revolution philosophy which ascribes near mystical powers of statesmanship to businessmen seems to have found him a ready ear in corporate boardrooms. The happy fates of fortune that have thus far kept his rank boosterism out of the nation’s capitol are whimsical indeed and we are told that if Gerald Ford keeps panicking and the Democrats continue to bumble, Ronald Wilson Reagan could end up as president.

Is this true? His credentials are certainly in order, having begun his trip down the conservative cow-path in the early Fifties when the box-office signaled the end of a frankly ridiculous film career, he got himself elected president of the Screen Actors Guild. His first real taste of Washington came during the brightest years of the House Un-American Committee where he performed yeoman duty by supporting studio blacklists of alleged communists. This fervent nationalism, as is often the case with any bozo who swallows the corporate party line, led to a lucrative contract, in his instance as m.c. of the General Electric Theater. To make sure those blue-collar types working the second and third shifts heard the good word he toured all 135 G.E. plants. Quite a thrill for your average light bulb inspector, no doubt.

The rest of his rise has been covered ad nauseam by the national press and if not worth recounting once is hardly worth repeating here. All that remains is the important stuff, what his best friends would call the bottom line. Can he win? The answer is that considering the average standard of intelligence in America, the chimpanzee that co-starred with him in “Bedtime for Bonzo” could win as long as its sex was male and its fur was dyed white and clipped short. So, yes he could win. Will he win is another matter and the answer is no.

First of all, politically he is where Gerald Ford would be without a democratic congress to contend with. The curious spectacle of a former chairman of Citizens for Goldwater calling his psychic twin brother “moderate” reveals the flaw in Ronald Reagan’s bid for for nomination.

His plan to halve the federal budget, and excluding the outlays for Social Security and the military does make 90 billion about half the remaining federal expenditures, would empty as many corporate coffers as welfare cupboards. An advisor to Lyndon Johnson once stated, “if you think its hard taking away from the poor, try taking away from the middle-class,” and, by inference, we can suppose it to be even more difficult to take away from the rich.

So what gives? Ronald Reagan is one of the better friends big business has ever had and if his plan is going to eliminate all that easy money, where is the self-serving angle we have all come to expect from our multi-nationals? Plain and simple, Ronald Reagan is being used to make Gerry Ford dance to the party line. The only purpose of this current love affair is to scare Ford back into its conservative arms.

Not that he has strayed very far. Rarely has vested interest been stroked so lovingly as during the present administration. This is the man who withdrew support for a land-use bill initiated by Richard Nixon and vetoed a strip-mine legislation while staying at the home of a friend who stood to lose millions had it passed. Nothing very subtle about Gerry Ford when it comes to taking care of his friends and his friends know it. They have simply looked ahead to November and realized that no matter who wins the presidency both houses of congress are going to return Democratic majorities. This is the same congress that has shown signs of attempting to re-capture the powers it has allowed recent administrations to co-opt. They simply want to make sure that Gerry steps on so many toes in his efforts to please that even after the election when the pressure is off he will have alienated congress to such a degree and so completely loaded his Cabinet with industry-approved crazies, that the only left step he will dare take will be with his skis on. A president and congress at open war means that not a whole lot gets done and the maintenance of the status-quo is the vision that drives any conservative.

Finally, Ronald Reagan, at sixty-five, is a one term president at best, a seventy-three year old chief executive being a little too bizarre for anyone’s tastes. Considering the fact that the vice-president is chosen with the understanding that he is the heir-apparent he can hardly be thought of as a prospect for this non-job either. The only place he fits is as the whip to flail Gerry along and make him attempt to match with action what Reagan promises with word. Ronald Reagan may think he has an award winning script, but come nomination time he is going to discover that while it plays well to the used car dealers in Peoria, it doesn’t on Wall Street. 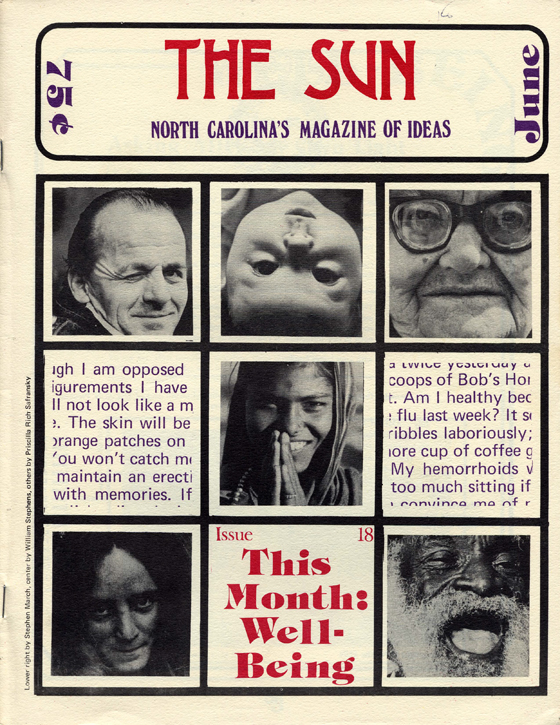 The Well Of Being

She Would Have Been A Taxi Dancer, But He Couldn’t Hail A Cab

Scenes On The Coldest Day