During one winter’s visit at a home that contained several televisions, I returned from errands and found our daughters in the bedroom closet (it has a light), reading.

They had sampled television. They weren’t interested in “Sesame Street,” the Muppets, animated cartoons, or the Festival of Roses parade. Even wildlife programs, they said, were not worth their attention if there were commercials, because the commercials were unsettling, insulting, or at best, irrelevant. Also, they said, people narrated the programs when they should have had the sounds of the animals or let the film run in silence.

They explained that the adults in the house wanted the TV always on, and they had permission to use the closet. If I was leaving, would I please shut the doors to the bedroom and hall as I went?

I shut the hall door, then the bedroom door, and sat on the bed and read. I could see there wasn’t room for me in the closet, so I didn’t ask.

Television was developing as I grew up, but I didn’t watch it much. I read. I spent a lot of time outside. The social interaction I enjoyed wasn’t possible in front of a television set. When I did watch, I couldn’t keep my mouth shut but voiced critical comments throughout the program, which did not go over well with others. I never did develop much of a relationship with television.

When Laura and I met, courted, and married, circumstances and choice took us in directions other than financial success. We could not have afforded a television set had we wanted one, and had a place to plug it in.

I took a job in an area lacking electricity. Our daughters were two and four when we moved, and had had almost no contact with television. We lived for the next nine years without television. When we visited places with television sets, the girls gave them a wide berth. I had said that television was not good, and they had interpreted that to mean it was dangerous. Their subsequent reading about harmful radiation from television sets confirmed that belief, even though I had not meant that television was physically dangerous. Further experience led them to believe that their first impression of what I had meant was more correct than I had realized, the issue of radiation aside. Television is dangerous, they said, to the culture and to the individuals who watch it. It robs people of their imaginations. When we read, we make up our own sounds and images to go with the text. With television, these functions are performed for us, and our imaginations atrophy. If we watch television a lot, we are passive in our living, and we don’t develop our critical and creative abilities. Television also interferes with physical growth, they said, because it reduces healthy exercise.

One summer, two young men came to a nearby cabin to celebrate their graduation from high school. They came to visit us several times, and their question each time was, “How do you exist up here with no TV?” They had trouble finding enough to do.

We said, walk. Look at the wildlife. Write a letter, a story, an essay, a poem. Draw. Paint. Make a piece of driftwood into a horse. Act out a play, making it up as you go, or write a play and then act it out. Have long conversations about whether or not people are more intelligent than animals, about what intelligence is. Walk to the river and go swimming. Observe the river. Mink, beavers, and otters have been seen there, as well as herons, cranes, ducks, geese, snakes, and fish. When a question comes up — for example, is there a difference between a fiddle and a violin? — find out the answer. Learn to play a musical instrument. Sing. Sing together. Go out and watch the stars and the moon. Listen to the coyotes. Listen to the elk whistling up in the timber. Go to concerts. Use everything around you and your own imagination to build the visions that power you through your life. Accept no substitutes.

It was interesting to the young men, like a view of an alien culture. It was obvious that what they could see, hear, and experience in the flesh meant little compared to what they received from television. They went home earlier than they had planned, to see some of their favorite programs.

My job ended, and we moved to a home with electricity. We were given a large color television. Several times, Laura rented a VCR and a movie to watch while she and a friend permed their hair. She and our daughters watched two or three movies together. I watched The African Queen and One Flew Over the Cuckoo’s Nest. I regretted watching the latter, and I decided not to watch any more movies. My decision wasn’t because of any failing of the movie, but because my suspension of disbelief was so complete that I was there, in the mental institution, and I did not want to be there; nor do I want to be in most of the places there are to go in movies or television.

I watched one television program, a special on pygmies, on public television, and it touched me deeply. I’m glad I watched it. Yet, while we have lived these past two years with electricity, we still haven’t accepted television into our lives. There is no room. There is no time. We are busy reading, being outdoors, playing musical instruments, writing, painting, drawing, having classes, being with each other.

We subscribe to a daily international newspaper to stay abreast of developments in the world, and I read several magazines. I miss some of the immediately breaking, most sensational news reports. I learn of them later, in calmer, more analytical, written pieces. I should be informed about these happenings in our world, but I have no wish to absorb the action and images. Similarly, our daughters know about war, murder, and violence, and they are deeply concerned and hope that humankind can change — they hope to bring about such change — but they have no obligation nor desire to see the images nor to absorb them.

Since our children have almost no background in television, they are not caught up in fashions of clothing, speech, or values. Consequently, they don’t speak quite the same language as most other children or teenagers. This hasn’t handicapped them. Rather, they are interesting to their peers because of this difference, and usually, good communication comes from the mutual exploration of such differences.

Some people seem uncomfortable when they realize we don’t have a television. It can limit conversation. I don’t know what anybody did on any channel in twenty years. I wouldn’t recognize Ronald Reagan’s voice if I heard it, though at the time of this writing, my job provides a truck with a radio, and I would recognize George Bush’s voice.

Yesterday, I saw twenty-six different kinds of wildflower in bloom. I watched a bluebird hover in flight. I wasn’t aware that a bluebird could do that.

Recently, my daughters and I watched a large bull elk grazing in the lower pasture, less than a hundred yards away. He was not afraid of us.

I listened to my oldest daughter practice violin, and my youngest practice piano. I heard my youngest daughter sing the newest song she has written. As her songs almost always do, it startled me because of its depth of feeling and sophistication. Even as I ask myself how a twelve-year-old can evince such depth and such profound humanness, I already know the answer — we all can. We are all that deep, complex, and creative, if we don’t shut ourselves down.

After she sang her song, she and I sang several songs together. She read a chapter of a book to Laura as Laura washed dishes. My oldest daughter read a chapter from another book for the family during our reading time. We each read or made up a story for the others just before bedtime. I wrote for about two hours after everyone else went to bed. I also worked an eight-hour shift of light to strenuous labor.

When child-development experts urge us to enrich our children’s environment, they don’t just mean to present them with colors and gadgets and mechanical routines of learning. They mean enrich the environment with love, with the parents supporting, teaching, revering the children, being there to fulfill the children’s needs.

The curiosity and interest that led Juniper and Amanda into reading hundreds of books early on was aided by Laura’s and my involvement with books and the world around us, and by our efforts to help them figure out how to satisfy their curiosity and how to discipline their interest and energy to achieve the goals they set for themselves.

We haven’t had the problems with communication, aimlessness, and emotional upheaval that families are prone to in our culture. Our daughters are thirteen and fifteen now, and we have had no signs of teenage rebellion because we are all always available to each other for appreciation and support. Each of us has a strong sense of purpose, and we have a strong sense of purpose together, as a family.

Obviously, there is more going on here than living without a television. We have taken the responsibility for our children’s education. We haven’t sacrificed time with each other for economic success; the former means more to us. We are strongly grounded in a religious belief that works very well for us. My jobs have been in rural areas, and there is land and wildlife to explore. As a caretaker, most of my work is close to home, and I am available to my family. My children are often involved with me in my work.

We would have achieved much less as a family, no matter what our situation, had we accepted television into our lives. If nothing else, it deprives us of contact with what is immediately around us, including each other. 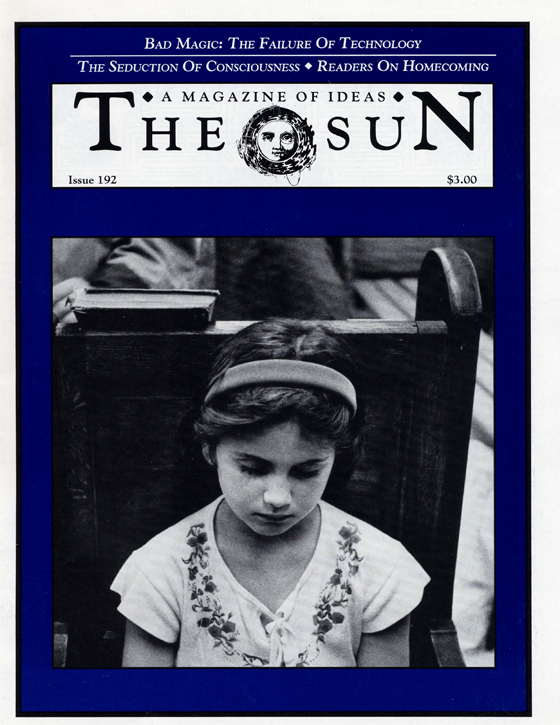 A Body Of Sound And Light