It was 4 A.M. and I was walking home from the bar with another man’s wife. I’d been in love with her since she was a little girl, but my good friend had snapped her up very young. I never had a chance. They’d been married ten years, had two boys, and were settled in a house in the town where I grew up. Her husband worked long hours, swam Olympic laps of beer. I’d been traveling, hadn’t seen her in a long time. My parents had just separated, abruptly and disastrously, and I’d taken my father’s side. My mother had left him for another man.

I had no intention of having an affair with her. I didn’t sleep with other men’s wives. I went to great lengths to find legitimate prospects. I was a cornball, a dupe, a Nice Guy; my romantic history up to this point had been one spectacular fade, wrong turn, superficial exploit, and exhaustive disaster after the next.

I drove a delivery truck for a bakery on the west side of Yuma. In the evenings two or three times a week I went to an old-folks bar where the geriatrics nodded over their drafts. “New York, New York” played over and over on the jukebox. The cigarette smoke tangled like the ghost of youth around the green EXIT lamp over the back door. I never stayed long. I wasn’t afraid of what my father might do alone, but I know what the silence is like when you are hurt, like clock hands made out of razor blades. You need someone to talk over it, to tell you that it’s really not this way.

One night she called the bar. The barmaid looked at me. “Yes, he’s here.” She came in a few minutes later. I ordered two tall goblets of beer. The barmaid watched us with a stern and envious fascination.

We met I don’t know how many times before anything happened. I’d go home afterward and pretend we were just old friends who’d gone out for drinks. I would climb into bed and her perfume would linger like soft flames in my hair. I’d close my eyes and still see the luscious lines of her lips. She stayed with me many nights in my dreams.

One night at the bar she kissed me so hard the jukebox bogged and every head turned up from its beer. I reached down under the table and grabbed her hand; the self rattled loose and spilled out like coins from a broken bag. Frank Sinatra wheezed back up. The Nice Guy wandered like an amnesiac out the back door.

She had a car but we walked, an ethereal fog walk. It was only a few blocks to my father’s house, the house I’d grown up in. The light came silver down from the street lamp. The 4 A.M. pines looked silver-sprayed like fake Christmas trees. The streets were sprayed, too, the rooftops, the sky, everything dipped in a silver Cupid-arrow poison. Our arms were locked. It did not occur to me that we might make love. (Yes it did.) She was the one who said the word, made the suggestion (love was not the word). It broke my terror like a filigree of fine shattering. I felt in some way, through my great unsuccess and trial of loneliness, that I was owed.

I was low enough then to be proud. I loved her. I had always loved her. Love and desire were the same. The Dogs of Amour as a rule did not toss me too many bones. I wanted a girl of my own, to love and cherish and be faithful and true to. I wanted an ivy-tangled fence and a flannel robe and a pipe burning some fragrant Norwegian mix and the sound of honey I’m drifting home. I wanted someone besides my mother and father and Jesus to love me.

We found clever bumbling places to meet, a car, a bar, the couch of a friend who was not home. Sometimes I took her into the empty house of my broken-hearted father. We thought no one knew, no one suspected. We got sloppy and ridiculous like fat people eating spare ribs from a bucket; there were no boundaries but a laughed-at sacrament and two boys sleeping in NFL muslin and a father swallowed in an armchair, his cigarette making slow arcs in the darkness.

It went on like this. We sat in the car and kissed and drank VO from paper cups. I never thought how she might feel. I didn’t consider the reasons and motivations of a woman who was trapped in a complacent aging marriage. But one night she made a declaration. She decided she was in love with me. She said she wanted to run away with me. She would give up her family. We would start up somewhere else, a bungalow with a ripped screen door and a bird in the air conditioner. She would wait tables. I would be a mechanic in a bus depot. We would start all over, kill the serpent and make apple pie; we would build a little brick house with a den and a sliding glass door, and an apron with ducks on it, smell of meatloaf, burble of orderly life on rerun TV, a birdbath with blue algae in it, a Bible in the drawer — the same thing she had now, but ten years back, with ardor and antelope running against the sky: the time-travel dream of the science-fiction housewife.

The moment was too cinematic. We wrestled on the front seat. The vinyl was a little cool and it made buckling, rumpling sounds, announcing the insignificance of the event. I spilled the orange juice. One of us hit the radio button and “Spirit in the Sky” blared out across the neighborhood. She had borne two children and she was not precisely the carved image of the seventeen-year-old in my memory. Sometimes I closed my eyes or just stared at her throat. Her throat was lovely as I made love to her in the jungle blue shadows of the animal kingdom.

Part of my chivalry comes from cowardice. It is easier for the physically undistinguished to wax spiritual. I had learned not to act like a sap but deep down inside a man cannot change his true nature. When we were through grappling on the front seat there was nothing about us, only the awkward re-dressing. The morning light began to fill up the sky and she sneaked back into her house. I went home feeling crap-cheap, my shirt wrinkled. My father was snoring. I didn’t want to sleep. I sat and thought, counseled with virtue. I knew that on the chain of being I was below octopus, yet I made no resolve to do anything about it. When you are stuck in a place and town and situation that are not worth it you take what you can get. I looked halfheartedly for a way out, but there was no one else, nowhere else. The noble life looks fine on paper; it is becoming to the aged, hangs well in the robes of moral heroes, glitters higher than war in ancient history, but I was a guy in Yuma who drove a bakery truck. Through the loss of another I slept like the meat-belly beast. The barmaid watched me with wonder. The rumor made me desirable: a glamorous wink in the modern eye. I was like literature, like TV, like romance itself. I was danger and reckless fashion. I could have been a criminal. I was a criminal. We all want to be chased and gobbled up by a larger thing: fame, danger, evil, wealth, art, romance, or God. Anything to keep from going home and seeing the five o’clock news.

In the morning the sun rose, warm and lush, and I had breakfast with my father. I cooked, made sure he got off all right. He read the paper, forcing cheer, keeping the radio on, the rain-tight architecture of music. He kept a close ritual of coffee, then work, dinner, his television shows and cigarettes. The newspaper stayed on the table open to the personals. He had opened them the first day she had left him, like the reflex of a man covering a wound after being shot. His face was gray from survival. He was a man and he could not allow himself to break. The despair stretched out. The music from the stereo could not fill the emptiness. Our conversations were automatic, clock talk. His single guiding hope was that she would return.

The thing called romantic love is too often some variety of predation. We jockey for position. Once love is established and identified it becomes the point of attack. I almost always knew how it would go, how long it would last. The one who fell would be the one destroyed. I never dreamed that she would be the one who would fall. In a few weeks I broke it off. I told her simply that it was wrong.

What happened to my father he had never believed would happen. He was fifty years old, settled, comfortable, secure. His children were raised. He had worked hard all his life and now he could relax. I understood why my mother had left him, but I still condemned her for leaving — for taking the easy way out. My father and I played cards and watched private-eye dramas on television. He looked in the personals, called once at something that looked right, but canceled soon after; it just wasn’t in him.

One Sunday afternoon I heard him crying in the bedroom. I didn’t know what to do with a father who cried. He had taught me all I knew, the important things, honesty, loyalty, firm handshake, the love beyond self-love, the duty of a man. Trust was his only religion and it was failing him and in turn it was the failure of the world.

The one thing a human being asks for on this earth is to be loved. Why should it be impossible? 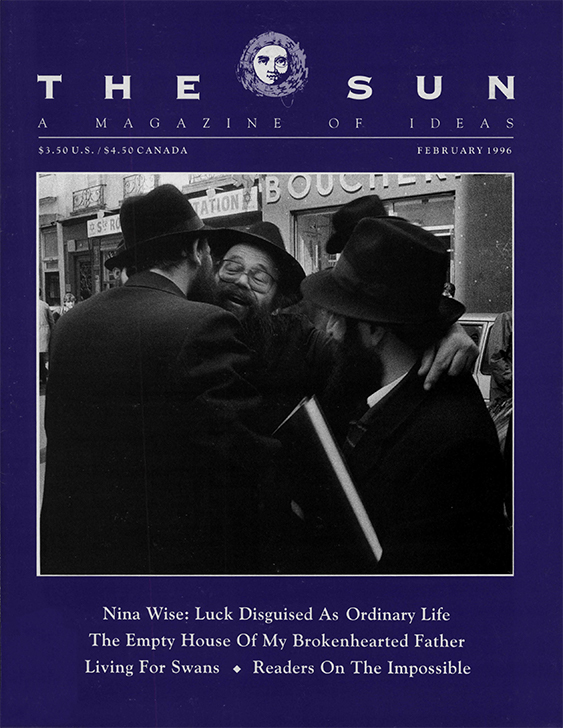