Alive In The Dying

Today is a special day for my daughters and me. My wife, Sally Gordon, would have been forty-two today. Her birthday is always a day of reflection for us. This morning, after I packed the children off to school and fed the cows, I thought it would be a pleasure to catch up on the issues of The Sun I had not read over the holiday season. Imagine my surprise to see, in the November 1997 issue, my friend David Romtvedt’s article “Alive in the Dying,” about, among other things, my wife and her death.

Earlier this fall, David had given me the book that essay was excerpted from, and pointed out two pieces in it about Sally’s demise. I remember as I read them being troubled by his reflections, and by their arbitrary romanticism. Later, I thought, Well, if that’s what it takes to make a book publishable, so be it. Moreover, I felt that I had no business interfering with David’s healing process — it’s been difficult for all of us. Still, I felt a little betrayed.

But today, seeing his essay in your periodical truly offended me. Something about the possibility of my wife’s abridged story lying on a coffee table somewhere while people discuss the pithiness of David’s writing seems perverse. His characterization debases Sally, and that hurts.

Since Sally’s death, one of her brothers, a devout Buddhist, has spent a lot of time trying to understand where her spiritual energy might have gone. Her mother suspects it has just disappeared. Fortunately, my two daughters do not allow me much time to speculate on such things, although in them I can see parts of their mother’s personality manifested. One was four when Sally died; the other, two. Thus, the image friends carry of her is extremely important.

David and his wife are two of my closest friends, and I value the impressions they hold of Sally. Their daughter Caitlin and my Bea have been in every class together since first grade. I have always respected David’s talent and his intellect. He is accomplished in just about everything he does, from writing, to teaching, to music. He has a perspective that, though sometimes combative, is usually refreshingly genuine. And I know how hard he has struggled for recognition, and how fragile he has found it. As a result, I am torn now between the need to disparage his likeness of my wife, and the love I have for him and his family.

But I am a historian, and accuracy is important to me. David’s portrait of Sally fits his literary purposes better than it does the woman he describes. Like David, Sally was an outsider to the community of Buffalo. And like him, she married into an established ranching family. Both came from working parents and went to good liberal-arts colleges. She played the piano, he the accordion. Both performed publicly. Both loved Willa Cather and gardening, although they disagreed about gladioluses. Both were smitten by the land and driven by a desire to protect the environment. While he went to Nicaragua, worked in various academic capacities, published books, and helped educate rural youth, Sally sat on the board of High Country News, pioneered a business that employed several women, and drove a bus full of library books to the hinterlands of Wyoming. David’s wife, Margo, is a potter whose store has become something of a keystone of the local economy, while I am a lifelong rancher and was, until Sally’s death, the treasurer of the national Sierra Club. And, just for the record, we all did household chores. We are hardly the stereotypes David paints of a smug status quo.

Consequently, David’s ruminations seem ill-considered. The windmill he tilts against is one he manufactured. In this story, he is no more the champion of truth than Sally is the figurehead of ranching. Perhaps his account is not so much about political perspective as about an angry exchange between two strong personalities. To make more of it is specious.

These days, though, everything achieves importance by being in opposition to something else. As such, David’s story is grist for the controversy mill. That is what’s so sad about seeing my wife’s vibrancy reduced to a literary device. By portraying Sally as the antagonist, David is able to create a context for his musings about hypocrisy — but in so doing, he recasts the argument and flattens the person he describes. The dialogue is lost. Nuances of the dispute are overlooked. We are left with little more than a transparent desire to get in the last word.

After Sally’s funeral in Buffalo, a Sierra Club staff member pointed out in a memo that “there were as many cars there with bumper stickers saying, ‘Bring Back the Wolves to Yellowstone’ as there were saying, ‘No Wolves.’ It was a tribute to her that so many people of such divergent points of view could be together in one room for a single reason.” This real person is not the character one would expect to find in a story about a quarrel between a liberal-minded hero and a judgmental member of a decadent society. Something is missing.

I remember that famous conversation David had with Sally from a different perspective. She came home from the library that day livid with him. She had had enough of his complaining about government programs. David had spent a few weeks depressed, moping around his home, grumbling about the injustices of the world and the inadequacy of the compensation for his writing. Sally thought he should get a job. That was often her solution for people she thought were overly self-absorbed.

In retrospect, the ironic thing about this exchange is that they were both right and both wrong: David has benefited from government grants and programs, yet that doesn’t diminish what he has brought to the communities and audiences that have enjoyed his presentations. Moreover, Sally was wrong to suggest he had no right to criticize the government simply because he profited by it. Still, David was being a pain in the ass that day.

His sanctimonious attack on ranchers and on Sally is equally misguided, though more calculated. As I reread “Alive in the Dying,” I feel the urge to refute, point by point, David’s accusations, as he does Sally’s — but that is not what is so troubling. It is the insensitivity of David’s two-dimensional account that really hurts.

Ultimately, as David points out, we are all to some degree beneficiaries of the federal government’s munificence. Though David might seem like a Pharisee in his affected disdain, I believe there is something more to “Alive in the Dying” than just a superficial rejoinder: it is in part a story of how hard it is to admit one might be wrong, and how disconcerting it is to leave such a painful thing as a passionate argument unresolved.

In the end, because David’s essay is wonderful proof that he is human, I worry his feelings might be hurt by the thoughts imparted here. Nevertheless, I am compelled to correct his unfair appraisal of my wife’s life and her spirit.

Where does this leave us? Regrettably, no closer to a better world. That path lies not in doctrinaire conceit, but in understanding our humanity, our light and our shadow. It lies in a better appreciation of where we fit in our landscape and who we are as a community. Sally and David would have agreed on that I think — albeit reluctantly.

Mark Gordon Buffalo, Wyoming
More Letters
What Do You Think? We love getting letters to the editor for our Correspondence section.
Has something we published moved you? Fired you up? Did we miss the mark?
Send A Letter 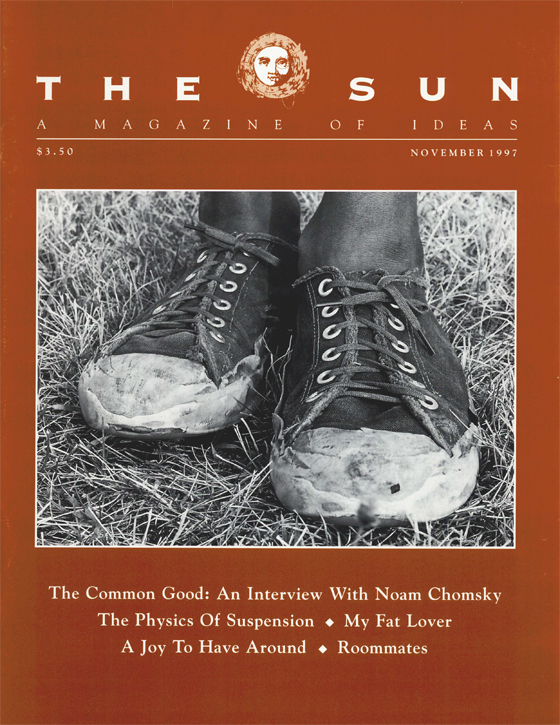 My Father Walked With Me In The Woods

By Christine Marie
The Sun Interview

An Interview With Noam Chomsky

All It Will Take