I’m a year older than President Bush. Maybe that’s why he doesn’t seem like much of a father figure to me. Or maybe he’s as much of a father figure as this foolish nation deserves. Nearly everyone is behind him now. It doesn’t matter how many thousands of innocent Afghans we’ve just killed. It doesn’t matter that next year’s military budget is twenty-six times as large as the combined military budgets of the seven “rogue” nations the Pentagon considers our most likely adversaries. It doesn’t matter that, with so many pressing social concerns, the president can’t shovel money fast enough into the pockets of the rich. When Senate Majority Leader Tom Daschle suggested scaling back some of the huge tax cuts Bush pushed through last year, the president replied, “Over my dead body.”

There are 6 billion people in the world. Five percent of them, or 300 million, live in the United States. In other words, if the world were a village of six thousand people, three hundred of us would call George W. Bush our chief. But since the richest 5 percent of Americans are the president’s real constituency, we might say this: If each of the six thousand villagers had a cat, Bush would be president of the fifteen fattest.

I picture the president leading a march down Pennsylvania Avenue. Thousands of patriotic citizens fall in behind him: proud, successful men and women dressed in clothes made of money. It’s the latest fashion: elegant suits and dresses made of hundreds of bills stitched together by hand. The parade passes a chic restaurant where diners are not only wearing money but eating it: crisp-baked tens with garlic aioli; twenties stuffed with apples and pork and garnished with roasted walnuts. At a window table reserved for former Enron executives, two men in fabulously expensive money suits are having the house special: oven-roasted hundreds topped with oyster mushrooms and bathed in a blood-orange sauce. From time to time, they wave at a familiar face in the parade. Most wave back. The president just keeps walking.

Who could blame us, the world’s only superpower, for assuming we were God’s chosen people? Then the World Trade Center was destroyed. Then Enron collapsed. Then the president fainted after choking on a pretzel.

I can condemn Bush’s politics without hating the man. It’s no surprise that the president isn’t more conscious. This isn’t a very conscious society. I struggle every day just to bring a little more consciousness into my life. Last year, Osama bin Laden was my enemy. Last month, it was Attorney General John Ashcroft. Last night, it was my wife. She wanted the window open; I wanted the window closed.

I wanted to sleep. I wanted to dream. I didn’t want to get up and look in the mirror and see the same man I saw yesterday, and have to haggle again for a little mercy. He drives a hard bargain, that one. He says that’s just the way it is for prisoners like me, who said they were ready to die for love, but went on living.

How comfortable this chair is. How utterly devoted to my needs. When I sit down, this chair supports me. When I stand up, it lets me be. How I love this chair! How this chair loves me!

The coffee is too strong this morning, but I can’t complain; I’m the one who measured the beans. So I’ll drink the coffee gratefully; what else can I do? I suppose I could vow to become the kind of man who always makes a perfect cup of coffee, who measures the beans as carefully as he chooses the words he whispers in God’s ear. I suppose I could try to figure out where I went wrong. But I think I know the answer: my parents drank instant coffee. Right in front of me. Instant coffee with nondairy creamer. Cup after cup after cup. The amazing thing is that I turned out the way I did: a man who grinds his own beans; a survivor.

I used to start the day with the New York Times. These days, I’m more likely to start with some religious text. Does this mean I’ve become less political? Of course not. More spiritual? Of course not. It just means that half my head is crammed with old newspapers, the other half with books about God. When the match of truth is struck and the hall fills with smoke, will I run from room to room, trying to save what I can? Of course not.

A study of women undergoing in vitro fertilization has shown that those prayed for by a group of strangers were twice as likely to get pregnant as women in the control group. The study, undertaken by the Columbia University College of Physicians and Surgeons, was carefully designed to eliminate bias: neither the women nor their doctors knew that anyone was being prayed for.

Ok, I get the message. No more ridicule hurled like a rock at the president’s head. Today, I’ll pray for him instead. 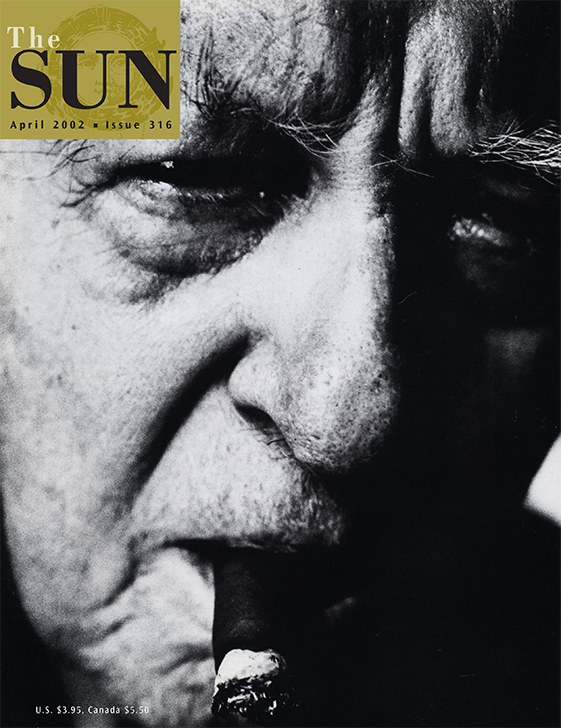