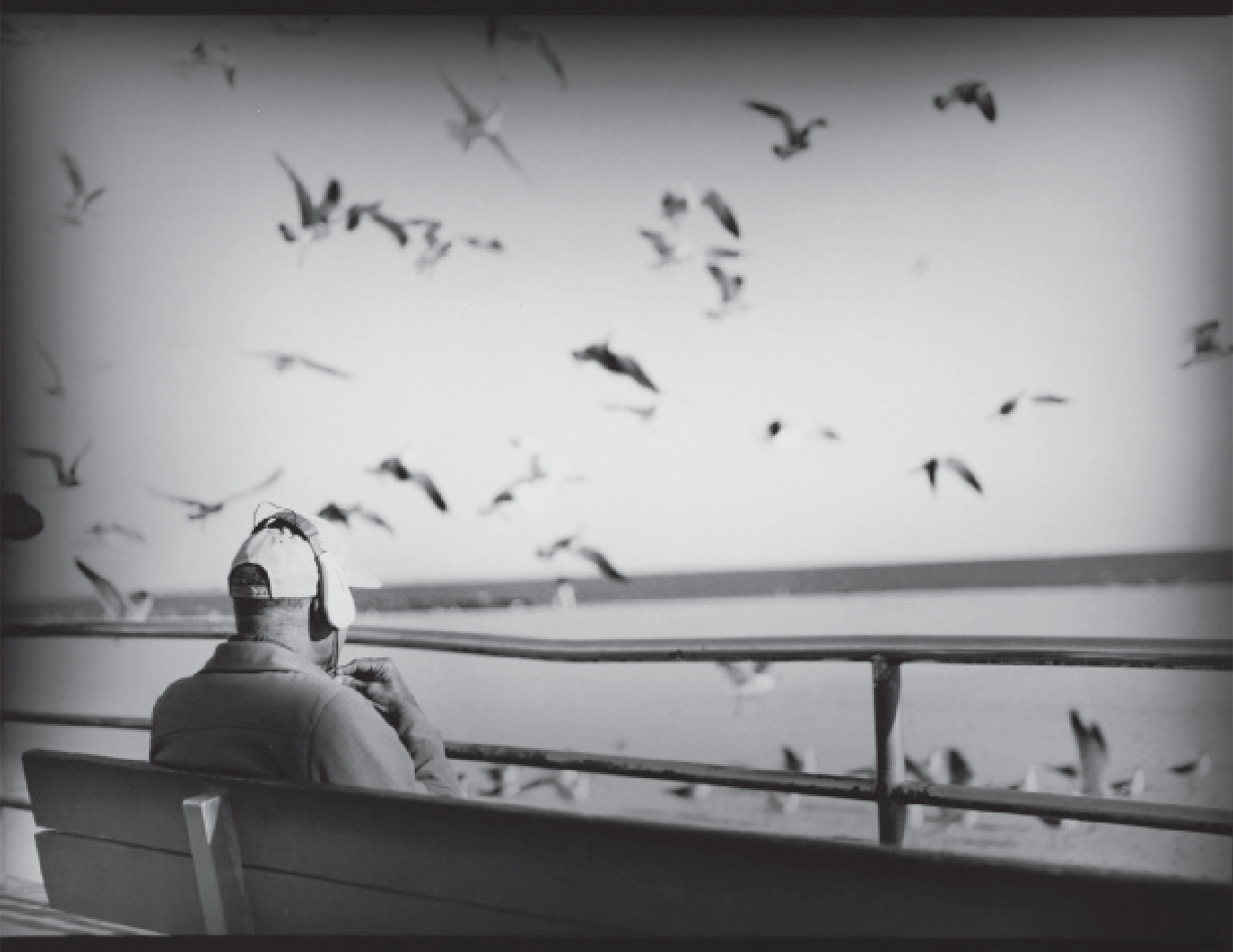 Some mornings when my thoughts knot with worry, when I feel both jammed and chased, I get up from my desk and walk three blocks to the East River. I buy some hot coffee and a buttered roll and carry my breakfast in its paper bag down to a place I know — a little walkway by the Queens Ferry Pier where 34th Street passes under the shadow of FDR Drive and ends at the water. It’s a good place to sit and stare, especially on these crisp October mornings. Not many people stop here. The ferry passengers from Queens stride down the gangplank at a tilt and hurry away under the roaring overpass toward midtown, leaving the sunny water flubbing gently behind.

The river slops its tonnage from side to side. It sways heavily, a dark gelatin, its glittery skin stretched so tight it seems you could walk across, the surface barely puckering under your steps. On the far side runs the thin gray hem of Queens: a low skyline of storage tanks, cranes, radio towers, factory roofs. Tiny treetops and church spires appear in the gaps. Two, three, four spires. In a void above some broken wharves, two glass apartment towers rise. Only along the water does the city open so fully into foreground and background, as if into present and past — the near side full and eventful, the far one motionless and gray.

Following the river’s edge to the ferry landing is a walkway, part of a new mini park: wooden benches, kidney-shaped paving stones, a row of thin municipal trees. Along the walkway runs a metal railing where you can lean and look out across the water. On the benches facing the rail, a few people sit by themselves, one or two to a bench. If a third sits down, one of the others waits for a minute, then gets up and leaves.

Some sit and chew thoughtfully, on break from one of the hospitals, maybe. A few of the men on the benches look homeless, but they sit up straight like the others, hands in laps. No cardboard encampments or trashy sprawls. Gulls perch on a stand of pay phones. A flock of pigeons funnels down from above and clusters tightly around some crumbs, scatters outward, then gathers again. The flock roams among the benches, rising and settling, opening and closing like a mouth.

As I walk past the benches, a voice addresses me, and I pause and turn. My back is to the river and the sun. A small man squints up at me, shading his eyes. “Can you . . .?” I can’t hear his words exactly, but it’s the same request one always hears. He’s Asian, which makes the appeal a little surprising. About forty or fifty, not shabby but sparse all over. A cheap maroon windbreaker, donated sneakers, a blue plastic bag with a few belongings.

I turn half away and pull the wad of bills out of my pocket, trying to extricate a dollar. They’re all fives and tens, it seems. I pull them apart. I was sure I had a one. Oh well, why not? I turn back and hand him a crumpled five. He nods sternly and points to the sky. “God bless!” Then he points at me. “You see? You know? God bless.” He points up again, then back at me.

I walk over to a bench on the far end of the walkway and sit down. For a time I read and drink my coffee. Beside me, the ferry pontoon bumps against the dock. It rises and falls, steadily thumping. I stand up and peer over the rail. The wire cables anchoring the pontoon are looped through a metal ring in the dock and clamped with small brass vise locks.

Then I go back to my bench in the sun. The bench sits by itself at the end of the park, so that the walkway runs directly toward me before it veers off abruptly to the left. Now and then someone turns away from the railing and comes walking up the path, appearing strangely portentous in their long, direct approach, like a stranger arriving with some coded message. It’s a pleasant way to see things, here on a sunlit bench.

For a minute I consider this effect, how this corridor of vision is so readily flooded with significance. Maybe it’s the setting: this walkway, the clear foreground and background of the river. Or maybe it’s the weather, the crisp October air ionizing everything. Things look brightly coincidental. That railing, those pay phones.

I look over at the Asian man. The pigeons have clustered round him, and he tosses them bread from his bag. And now his spare figure reminds me of something, only because he’s Asian I suppose. He didn’t smile at me exactly, but he squinted over his crooked teeth in a way that reminded me of pictures I’d seen in a book of Zen folk tales: the old beggar with his gnarled grin who is, in reality, an errant deity. I had always liked those Buddhist faces of wisdom, their look of foolish glee so fully the opposite of the Christian saints’ sad burdens. It always made me think, Why not?

Why not imagine that a beggar is a deity? Or that something you do will bring you luck? That some small object you bend down and pick up from the sidewalk will contain a mystery, a discovery — an old ship ticket, a rusty key, an address written on a scrap of paper? Why not sit here and believe such things, just as so many people hurrying through the city believe that they too will be discovered, that someone will bend down and pick them up, changing their lives? Why not believe? Isn’t it simply too disheartening to suppose we must do everything on our own?

As I watch, the sparse man crumples up his empty bread bag. Then, abruptly, he swings his feet up onto the bench and lies down on his back in the sun. Startled, the pigeons lift off with an explosion of wings and come sailing down the walkway, down my long corridor of vision, swooping into the foreground so suddenly that I duck my head. They swing up and veer away over the river, where a barge is passing, setting the pontoon thumping, thumping in its creaky tethers.

Why do I worry so, I wonder. Isn’t this all it will amount to in the end? Here is the edge of everything and a ferry, set against the gray distance. There is a man lying on his back in the warm sun, having fed what he had to some birds. You pay this man five dollars. Then you walk to the end of a long corridor, to a waiting area where it is hard to recall exactly what question, fear, or worry brought you to this place. 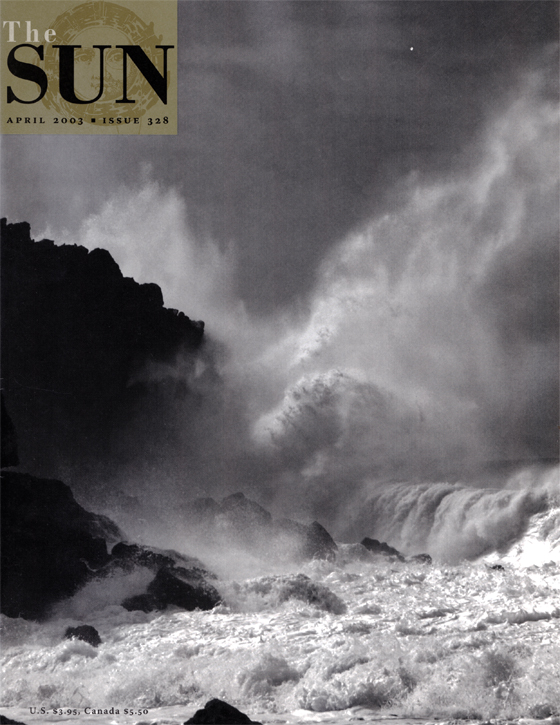 Coming Back To The World