When I came to interview for a job at The Sun in 2001, the first thing I noticed was how different the office environment was from the high-tech atmosphere of the software-development firms where I’d worked. As I crossed the threshold, I detected the faintly musty aroma of an old house in which endless cups of dark-roast coffee had left stained rings on sheaves of paper. The floors of the two-story bungalow creaked. Manuscripts and magazines filled every shelf in sight. Green tendrils of ivy spilled over filing cabinets. Everywhere I saw furniture, boxes, and bins made of real, honest-to-God wood — solid wood, not medium-density fiberboard. In the editor’s office, beside a huge oak desk, were an outdated computer and, in the corner, an old Underwood typewriter. I wondered whether the typewriter got more use than the computer.

And then there was the editor himself: Sy Safransky, in all his post-hippie, neo-Luddite glory. Here was a man who in the early 1970s had quit his daily-newspaper job in New York City and moved to North Carolina to join a commune; who had started an idealistic magazine using only a manual typewriter, a photocopy machine, and a stapler; who had supported himself through The Sun’s lean years by selling geometric string art, running a juice bar, and shoveling manure; and who now peered questioningly at me through his metal-rimmed John Lennon–style glasses.

I made it through that interview and became The Sun’s administrative assistant. Over time I learned more about Sy’s strong resistance to most technological advances, which to him didn’t seem necessary for doing business. It wasn’t until the late eighties, for example, that Sy realized The Sun might actually need a computer; he began researching as if he were planning to buy a spaceship in which to fly to the moon. Best to be cautious; best to understand every detail of bits and bytes, RAM and ROM. After a long and intensive investigation, he bought a DOS computer with a monochrome monitor that displayed text in glowing amber. (Five years later, The Sun was still using that first computer, though the rest of the world had already moved on to Windows by then.)

In the early nineties, an enthusiastic reader wanted to give more than four hundred gift subscriptions and asked if he could fax us the list of recipients. He couldn’t believe it when he was told the magazine didn’t have a fax machine; Sy just didn’t see any need for one, even though most businesses had been relying on faxes for nearly ten years. The reader bought a fax machine, shipped it to the Sun office, and then faxed in his gift order.

The Sun didn’t have a website until 1998, when two generous subscribers who owned a small web-design company volunteered to create one. Sy was hesitant at first, but he finally agreed that maybe it was important for the magazine to have an online presence. The subscribers built a site that allowed The Sun to offer subscriptions, books, and back issues over the Internet.

Our editor still takes small steps toward the future. Even now Sy uses diskettes to share files; he resists deleting anything from his computer, including spam; he’s unsure about the difference between clicking and double-clicking; he drags his feet on sending even the simplest of e-mails; and he prints out everything so that he can read it on paper. He’s never used an ATM, and he’s perfectly happy driving an old Volvo with the gas-tank door ripped off. You’ve probably heard of the Slow Food movement; well, at The Sun we have our very own Slow Technology movement.

In 2004, by which time I’d become The Sun’s project manager, I expressed concern that we weren’t keeping pace with the rapid developments online. Other reasonable, nontechnophobic staff members concurred. Though we were grateful for the well-functioning website we had, it hadn’t changed substantially since its inception. Meanwhile, the Web was evolving dramatically — and people’s expectations along with it. Podcasts, blogs, video, and social networking were on the rise. Our site didn’t even have a “Send to a friend” button. We were at risk of becoming a digital dinosaur.

I finally hauled Sy out of the Mesozoic era, and we began a major website redesign; two years later (remember, The Sun moves slowly) we were fielding proposals from twenty website-design firms. Proposal evaluations, reference checks, and interviews took another six months. If purchasing a computer had been like buying a spaceship, building a new website was like constructing a space station: better hire the right contractor, or the solar panels might blow off.

After careful deliberation, we hired Montreal-based Plank Multimedia and together began the real work of building the new site. The eleven months it took us seemed like a sprint compared to the many years of convincing and planning.

Recently staff members gathered in Sy’s office to celebrate the launch of the redesigned website (www.thesunmagazine.org). As we popped open bottles of sparkling wine, we wondered aloud what impact the new site would have. I reminded everyone of our goals for the website: We wanted it to reflect the aesthetic of the magazine; to better showcase our authors’ and photographers’ work; to highlight The Sun’s extensive archives; and to be easier to navigate and use. We wanted readers to be able to share writing from the magazine with friends and to find other Sun readers in their areas. We wanted prospective readers and contributors to be able to find us quickly. And we wanted the website to help deepen our relationship with our readers by offering more ways for us to stay in touch.

Recently I sat down with Sy in his office, which has been renovated since the day of my interview. He’s moved the old typewriter to his closet, and his computer is almost up-to-date. But the big wooden desk remains, and he still peers at me through wire-rimmed glasses whenever I suggest a new idea for the website. He’ll probably always prefer pencils to pixels.

When I mentioned that, even with the redesign, The Sun is still behind most of the online world, Sy’s eyebrows shot up. I reminded him that the next step for us is to offer readers an opportunity to create their own content: to comment on pieces we post; to communicate with each other through the site; to tag and share our pages on social-networking sites — in effect, to give readers some control. Let’s just say that the C-word didn’t go over well with an editor who strives to ensure that every word is spelled correctly and every rule of grammar followed, even on a website. So maybe we’ll hire a bevy of online editors, or make people pass spelling and grammar tests before they may post content on our site. (All of us on staff had to take tests before we could work here. Welcome to our world.) However we proceed, you can be sure that we’ll do so carefully and slowly. Wish us Godspeed.

P.S. Please let us know what you think about the new website.

I loved reading Angela Winter’s behind-the-scenes story about bringing Sy Safransky and The Sun up to speed on the Internet [“Don’t Kill the Instant Messenger,” January 2008]. By coincidence, I had just renewed my subscription via the magazine’s website, and I’d taken notice of the clean, efficient, user-friendly design. And I was thrilled to find the December interview with Adyashanti [“Who Hears This Sound?” by Luc Saunders and Sy Safransky] on the website in its entirety. I immediately referred members of my meditation group to the piece. Most had not heard of The Sun before.

Having worked with a man of Sy’s generation at a nonprofit that grew in size, I can identify with Winter’s experience. Sy and my boss share some old-fashioned virtues I admire, such as integrity, preference for personal connection, and hands-on commitment. But they also share qualities that might hold an organization back, like fear of technology and a need for control.

It’s a challenge to maintain the delicate balance between keeping things intimate and increasing The Sun’s reach through modern technology. Sy’s dedicated, disciplined approach has made the magazine great, but I hope he’ll try more of the new communication tools out there. He might find he likes them.

Dana W. Ardmore, Pennsylvania
More Letters
Thank You Your donations helped to keep our ad-free, nonprofit magazine in circulation last year, funding everything from production to distribution. Learn how you made a difference last year. Learn More 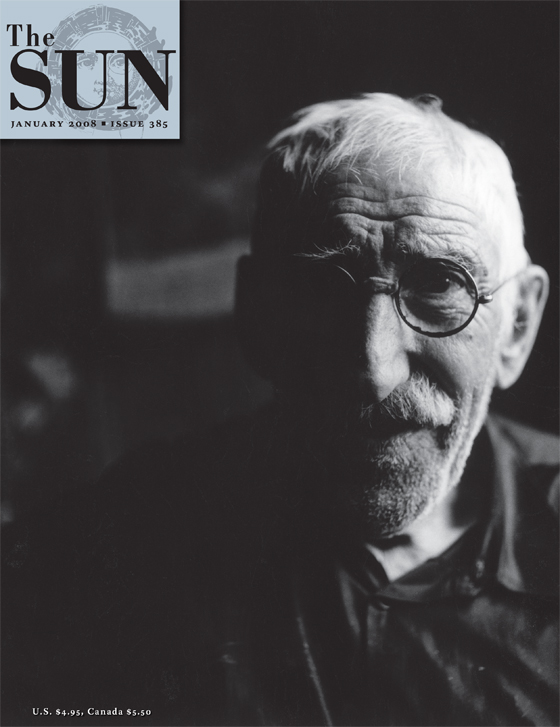