“Rowboating with Hobos” is adapted from Love & Terror on the Howling Plains of Nowhere, Poe Ballantine’s book about marriage, parenthood, autism, and the mysterious death of math professor Steven Haataja. Copyright © 2013 by Poe Ballantine. It appears here by permission of Hawthorne Books.

I have three gifts: I can make an excellent cream soup, I’m a good speller, and most people who don’t think I’m a smart-ass or from Venus think I’m funny. Even my computer programmer ex-brother-in-law, who never laughs and is probably to some extent autistic, admits that I have a “sophisticated sense of humor.” My wife, Cristina, however, didn’t think I was funny. She took all my remarks literally. I’d say to her, “Why don’t we walk to the store on our hands today,” and Cristina would frown and say, “No, we can’t do that.” Then I would say, “We’ll hitchhike to Rapid City, then, and catch a freight train back before dark,” and Cristina would shake her head somberly and frown. She couldn’t fathom why I might want to hitchhike to Rapid and return by freight train or walk on my hands or steal a helicopter or go rowboating with hobos or contact my home planet or pull my pants down in front of the queen.

When you read as much as I have about autism, everyone after a while begins to look autistic; everyone fits somewhere along the “autism spectrum,” just as it was a few years ago when it was discovered that we are all gay, that we all fit somewhere along the homosexual spectrum. (I suppose, consistent with this argument, we all fit somewhere along the heterosexual spectrum, as well.) It was interesting to see how many traits Cristina shared with our son, traits that in his case were numbered as symptoms under the broad canopy of Autism Spectrum Disorder (ASD): literal-mindedness, awkward personal interaction, dearth of social interest (except with family members), hypersensitivity to stimuli, wandering attention, lack of empathy, rages when rituals were disrupted. Some of these traits, in Cristina’s case, could be chalked up to her having been struck senseless by a drunk driver in Zacatecas, but she admits that she’s always been spacey and not too social, that her personality hasn’t changed markedly since it was formed.

That makes me reflect on what a friend told me after I’d remarked about the preponderance of mathematicians bunched along the autism spectrum: He’d known a number of high-functioning autistics at NASA. One in particular, an eccentric experimental physicist named Bunthram, insisted, “I’m not autistic. I’m Bunthram.” Bunthram didn’t believe in autism. What most people considered autism, Bunthram considered part and parcel of the genetic bundle that came with a logical mind. Furthermore, Bunthram didn’t want to be social or to be touched or to play volleyball or square-dance or sit around a bonfire singing, “Kookaburra sits in the old gum tree.” He wanted to work and to be left alone. He liked his one-dimensional life and his job and his apartment, his cats and the TV shows Battlestar Galactica, Airwolf, and Charmed. He thought most people were oversocialized, but that was their business. His hero was Nikola Tesla, one of the landmark intellects of all time, who wouldn’t have achieved greatness without his ASD tendencies toward isolation, celibacy, pattern obsession, ritualism, and the rest of that prototypical geek package.

I am always relieved to come across optimistic views on autism. I suspect that autism is a natural intellectual function correlating to our increasing need for specialized, nonlinear, and advanced “thinking styles” and not a disease or a “developmental disorder.” The work of Simon Baron-Cohen — not the comedian but the psychopathologist at Cambridge University (do they call you a “psychopath” for short, Simon?) — illustrates this view. Baron-Cohen has been doing genetic research on autism for years and has theorized that most autistics have a drive to systematize. Mathematicians, physicists, engineers, logicians, number theorists, software programmers, and quantum cryptographers are all good examples of systematizers, and in each of these fields you’ll find higher rates of autism.

Systematizers are much more likely to be male as well as autistic. About 80 percent of all autistics are male. Baron-Cohen proposes that autism is therefore an extreme male-brained profile. But this doesn’t make it inherently psychopathological. In fact, autistics, by their asocial predispositions, narrow preoccupations, tendencies toward ritual and repetition, sensory filtering, and so on, are able to work long periods without distractions on deep projects that might bore other people to death. Think space travel and the overall management of a cyber-connected universe.

At the end of any spectrum is dysfunction, chaos, madness, disease, and snack machines getting pushed over. On the political continuum both the Left and the Right, when unimpeded, lead to totalitarianism. And I wouldn’t want to rely too heavily on psychology or go all New Age on you and declare that autism is a gift. It does, however, seem possible that, with its considerable claim on the population, its numerous talented representatives, its frequent association with rapid brain growth, and its continued ability despite exhaustive research to evade cause or cure, what we’re calling “autism” (and the heavy psychological inference of “abnormality” or “disorder”) might well instead be cerebral evolution.

Cristina is a systematizer, too. She gravitated to a profession — dentistry — that demands close attention to detail, along with emotional distance from pain and patients she is literally inside of. Often on Saturdays when we were courting in Mexico, she couldn’t go out because she had to “organize” her room. Everything in our house has a place. I don’t get to put anything where I like. I find my books in a neat stack on the end table each time I sit down to read. Whenever she works with me, whether cooking in the Olde Main kitchen or on a side job I pick up, we end up arguing before we do things her way. I am constantly startling her as I come around a corner or out of a room, even though she knows I am in the house. Faithfully, like a prisoner in solitary, she’ll put an X through each day on the calendar with a black ink pen. Staring at me as I explain something to her, she’ll say when I am through, “You need to trim your eyebrows.” She’ll check the dishes after I’ve washed them, remake the bed the way she likes it, refold the clothes after I’ve done laundry, and tell me what shoes to wear, which used to lead to an argument, since it seemed to me more like nagging than a drive to systematize. Her job as a dental assistant is extremely important to her, and she puts so much into her work (she’s the best worker I’ve ever known) that now she barely has the energy to quarrel when she gets home in the evenings.

Most noteworthy in all of this is that, at the other end of Baron-Cohen’s systematization spectrum, as we part from masculine science and sine-cosine-tangent, we find the feminine empathizers, those who have the ability to identify with others, imagine how they feel, read facial expressions, make a crawfish étouffée with steamed asparagus and jasmine rice, give change to panhandlers, and not intentionally say hurtful or antagonistic things. As a rule, systematizing and empathizing are opposed. If you’re strong on systematizing, then you don’t want some goober to come along and mess it all up. If you’re long on empathizing, then it isn’t likely that you’ll stare willingly into an electron microscope for twelve hours or obsess about how the pillows are arranged on the couch. Systematizers are rule-based, less flexible, and more inclined to stick to patterns and positions. Empathizers are more emotionally oriented and free-form in approach, care less about rules than about getting along, and usually give in when the argument starts because, really, what difference does it make what shoes I wear if I’m driving you all the way to Omaha?

Whether you believe that autism is a blessing or a curse, the result of an SV40 monkey-virus mutation (if you’re interested in this angle, read Edward T. Haslam’s Dr. Mary’s Monkey) or the mercury-caused destruction of mitochondria, having a sense of humor is your pass out of ASD. Autistics are rarely funny, the reason both Einstein and Steven Haataja should be excluded from the list. Cristina is funny, too; she’ll say that she looks like a fish or that I look like a homeless guy. Still, my droll, ironic wit evaded her for years because she fielded every line I delivered literally. Some of this had to do with the language barrier, humor being one of the last things you learn in a new country.

But one day, after Cristina had described a tyrannical dental patient from Virginia who’d been told to leave the office due to the volume of abuse she’d heaped on everyone, especially Cristina, I said, “Why didn’t you just keep tipping back the chair until she slid out?” As usual, Cristina only stared at me, trying to ferret out whatever nasty thing I might’ve been implying. And then the outlandish justice of what I’d suggested suddenly hit her. Her face relaxed and opened, her eyes fluttered, and she broke into a grin and laughed. And the way she stared at me for the next thirty minutes was like six years of reassessment, as if she were recalling all the other jests and joshes and jocularities delivered solely to relieve tension and make life a little more pleasant and bearable. Once she understood that I wasn’t criticizing or incriminating her or making preposterous suggestions to confuse her or tarnishing her public image or intimating that I didn’t love her anymore, we had our first cease-fire. It was a revolutionary moment, a watershed moment, like rods of dusty sunshine poking through holes in penitentiary walls.

I just finished reading the excerpt “Rowboating with Hobos” from Poe Ballantine’s Love & Terror on the Howling Plains of Nowhere [February 2014], and I want more.

I laughed when Ballantine’s wife, Cristina, finally got his dry sense of humor. And I appreciated that the two of them have stayed together long enough for that to happen.

I agree with Ballantine’s view on autism-spectrum disorder (ASD) — that it’s just part of the wider spectrum of human behavior. We should focus on what’s right with a person. We’re all abnormal, odd, or queer at some time. As long as we’re not hurting ourselves or others, we’re fine just as we are, with our diverse personalities, behaviors, and ways of folding laundry.

Denzial Tittle Texarkana, Texas
More Letters
Thank You Your donations helped to keep our ad-free, nonprofit magazine in circulation last year, funding everything from production to distribution. Learn how you made a difference last year. Learn More 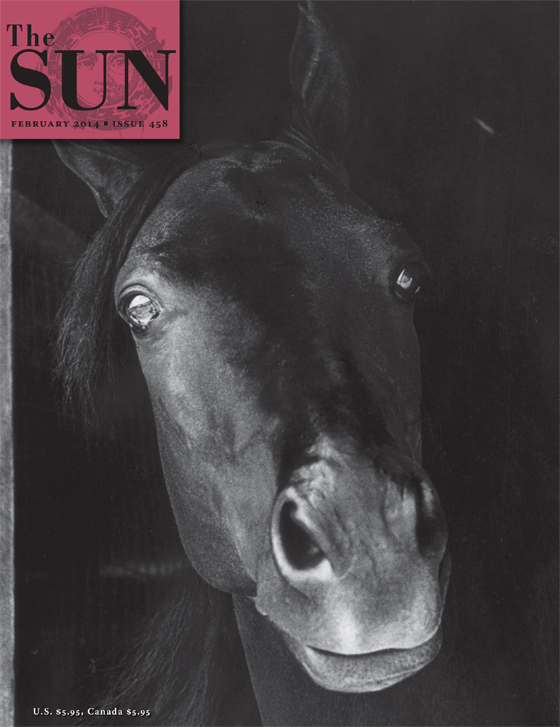 By Dane Cervine
The Dog-Eared Page