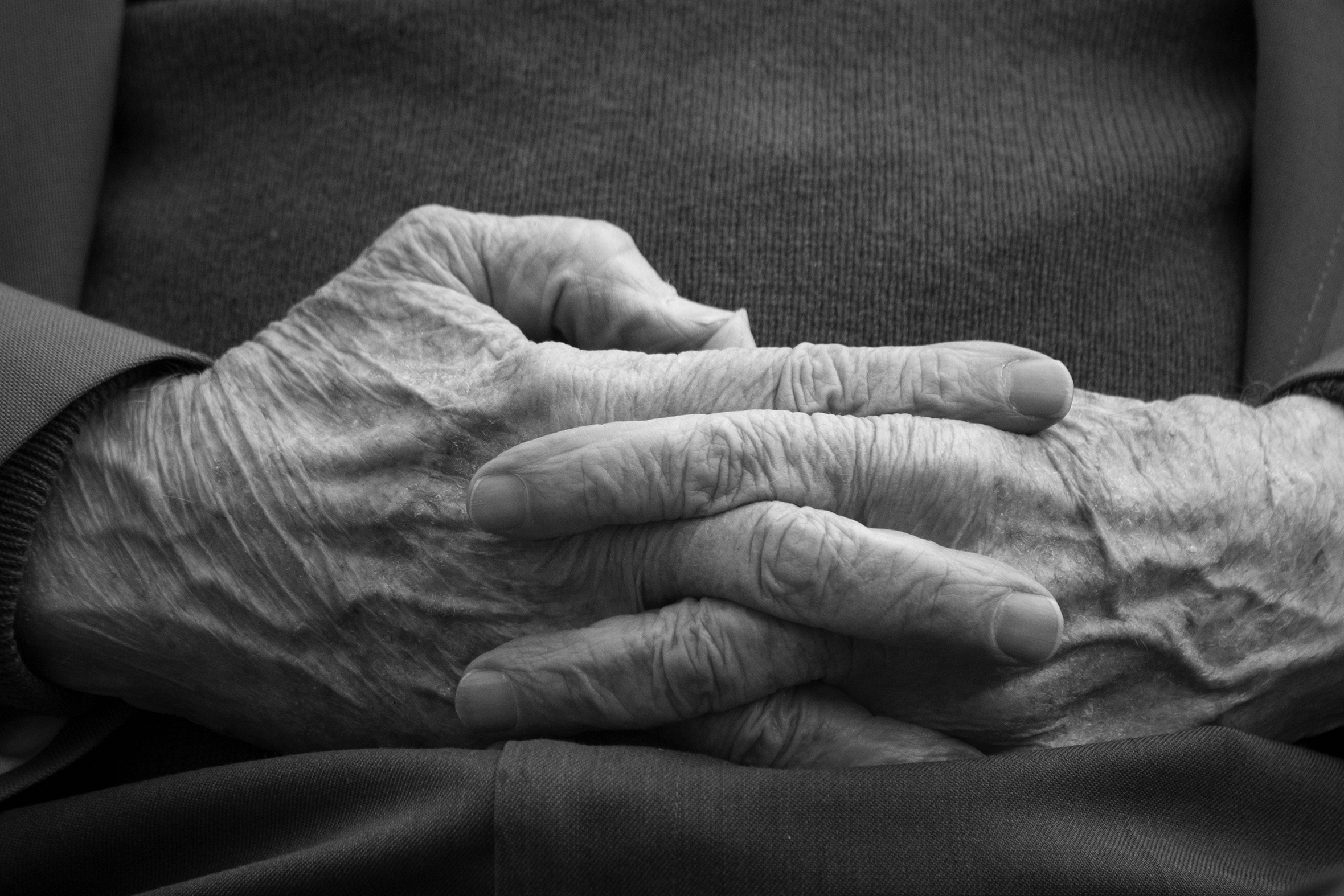 I turn the key and step inside. Mother is stretched out on the sofa, her eyes closed, her feet resting on Dad’s lap. He looks up with a smile bordering on a smirk, as if I’ve caught them in an act of intimacy and he is proud of it. He continues stroking Mother’s feet. Dad is ninety-four, and Mother is ninety-one. They have been married seventy-one years. Today is a good day: Mother knows his name.

With help from my siblings, two years ago my husband, Donald, and I removed my parents from their home in Indiana. It had become clear they could no longer take care of themselves. They had grown fragile, due in part to Dad’s chronic heart and kidney disease and recurring ministrokes and to Mother’s diabetes and dementia, which had worsened after a serious fall. We’d exhausted all options to keep them in their home. They now needed daily care, and with four of their children living in the same North Carolina town, it made sense to bring them here. But my father, a Marine pilot who served in three wars, does not relinquish control easily, and he refused to move in with any of us. He finally said yes to a condo two doors down from my husband and me. My siblings help out a great deal, but Donald and I are what our friends call the “first responders.” We spend several hours with my parents each day, and at night I place my “firefighter clothes” beside the bed so I can arrive at their door within minutes. These clothes have gotten a lot of use this past year.

Seeing me come into the room, Mother raises herself up on the sofa and turns to sit beside my father. He’s wearing his favorite Marine Corps cap, the red one, though they’ve not been outdoors since I left them after breakfast.

“Well, hello there,” Mother says with the warmth she might extend to someone she hasn’t seen in months. “Come in and stay awhile.” Her tone tells me she doesn’t remember our breakfast together or what happened last night, but at least she recognizes me. On her best days Mother can name all six of her children. When friends tell her how smart she was to have so many kids who now care for her and her husband, she shrugs. “I never planned any of them,” she says. “It just happened.”

This comment often leads to a story that has become family legend: It was 1955, and my father had been home from his overseas deployment for several months. Mother, now pregnant with her fifth child, was sitting in my grandmother’s kitchen, breast-feeding my baby sister. “Juanita,” my aunt said, gazing at my mother’s belly, “how could you let this happen again?”

Mother smiled and replied, “I’m just always so happy to see him.”

Though I was a young child then, I was aware of my mother’s beauty — her thick black hair and her dark eyes that caught the light. Her eyes are deeply shadowed now, the lids heavily veined. She doesn’t sleep well, so Dad doesn’t either. But each morning he erases the evidence of their fitful night. After he’s dressed — a twenty-minute ordeal that leaves him panting — he smooths their quilt and centers Mother’s hand-stitched pillow on the bed. The precision of the gesture stops me. After all the losses, after everything that’s been taken from them, here is something he can control. During the week Mother spent in intensive care after her fall, either my sister or I kept watch in her hospital room, and in the morning I’d drive to my parents’ house to check on Dad. “I stayed on my side of the bed,” he’d tell me, “and I cried all night.” Even so, he made their bed each morning and centered the pillow.

Late last night a phone call from Mother jerked me from sleep. She was frantic, shrieking that there was a stranger in the house, a man who insisted he was her husband — “but he’s my father!”

“The stranger?” I asked.

“Yes. My father. He says he’s my husband. And I can’t find Paul anywhere.”

Paul is my dad. I told her I’d be right there.

A few minutes later I opened their door and saw her ascending on the stair lift, wearing her short pink nightgown and my father’s eyeglasses, which she must have found by the phone. The “strange” man appeared at the top of the stairs, wearing only white briefs and a T-shirt.

“Juanita, what are you doing?” my father asked.

It took us an hour to convince her that the intruder was her husband and that it was safe to get back into bed with him.

“Well, I’m glad we got that settled,” she said. “Because Paul’s a great guy, and I love him. But what about the other guy? Where did he go?”

When I got into my own bed at home, I reached for Donald’s hand, and he shifted his body closer to mine. We’ve been married nearly forty years, but we are still learning from my parents what love looks like: How it moves. All the shapes it takes. Though my parents can no longer care for themselves, they care for each other.

I’ll go for walks with them, my mother pushing her walker and my father shuffling with his cane. Strangers sometimes comment, “What a cute couple.” They often say this to me within my parents’ hearing.

“They’re adorable,” the dental assistant says each time I bring them to the office, as if they were children or dolls I’d dressed up.

I want to say, No, they aren’t adorable. They aren’t cute. They are grown-ups struggling in ways you can’t imagine. In the past eighteen months our family has lost four of its elder men, including Donald’s father. Dad is now, as my grandfather used to say of himself, “the oldest kid on the block.” A year ago Mother lost her only remaining sibling. Most days she forgets Barbara is dead, and when she does remember, it’s as if her sister has died all over again. “I miss her” is all she can manage.

Three or four times this past year, during Mother’s lucid moments, she has phoned me in the middle of the night to report that Dad is “thrashing” and “talking crazy.” The first time it happened, I thought he’d had a major stroke. I found him flat on his back, his legs rigid, eyes open and staring.

Whatever demons he wrestled were beyond our reach and understanding: The waking dreams called “night terrors”? Frightening visions of World War II or Vietnam? More likely he was reliving the solo bombing raids in Korea. (“It was terrible,” he once told me, “the things we did. Fire for four or five city blocks. The world just lit up.”) I did what I could, rubbing his legs, assuring him that he was safe, but only Mother’s touch could soothe him. Once he’d stopped thrashing, I helped her into the bed, and she scooted over beside him, all ninety-eight pounds of her. She took his hands and pressed them to her face. “Paul?” she said. “Paul? I’m here.”

At the sound of her voice, his legs relaxed, and his breathing calmed. “Please don’t leave me,” he said.

Each time they go through this, it’s the same script, Dad repeating his lines, Mother echoing her part.

I know what is coming: He turns toward her. She wraps her arms around him and begins to rock slowly back and forth. My eyes sting, tears starting up. This is their moment. I should leave, but something holds me there.

One night I texted Donald to hurry over, saying I needed help with Dad. I didn’t. Dad was stable by then. What I needed was for my husband to watch with me and learn: if this is what it comes to, then this is what to do.

For my parents, of course, this is what it has come to. And more is to come over the next few years, if we’re lucky enough to keep them that long.

But today when I arrive, they are here, holding hands on the sofa. Light slants through the blinds, striping the wall behind their heads. Upstairs their bed is made, the pillow centered.

Mother yawns and pats the cushion, an invitation for me to sit beside her. She tells me about a dream she had last night: there was lots of snow, and a snowman was clearing a path.

“Really?” she says. “It was so vivid. I can still see the sun sparkling off the snow.”

“I told you about it, Juanita. Well, I think I did. Maybe it was your dream. Maybe you told me.” I can see by his expression that he’s not sure. “It doesn’t matter,” he says. “It was a good dream no matter whose it was.”

Rebecca McClanahan’s essay about her elderly parents [“What Love Looks Like from Here,” February 2017] could have been written about my own mother and father. Like McClanahan, I, too, was a “first responder” to their needs. For ten years I went to bed with clothes laid out for the dreaded dash to the hospital. People often said my octogenarian parents were cute. I wanted to shout, “They’re not cute! They are the elders of the human tribe and deserve to be treated as such. If you want to see cute, go look at a puppy.”

Rebecca McClanahan’s “What Love Looks Like from Here” made me cry. I was touched by the beauty of her parents’ love for each other and her love for both of them.

Rachel Claret Sugar Land, Texas
More Letters
Thank You Your donations helped to keep our ad-free, nonprofit magazine in circulation last year, funding everything from production to distribution. Learn how you made a difference last year. Learn More