Irrespective of human accomplishments and human folly, the sun will eventually run out of fuel, expand into a red giant, and vaporize the planet. Of course, something catastrophic could happen well before then: massive solar flares spewing murderous gamma rays into the atmosphere; a supervolcano bringing on a global ice age; a killer asteroid crashing into the earth. Actually the threat from outer space isn’t as remote as it once seemed. Earth has been hit many times by asteroids; there’s no doubt it will happen again. The very largest asteroids, capable of causing global climactic catastrophe, collide with the earth on the average of once every hundred thousand years. But even a smaller space rock could kill tens of millions of people if it struck a densely populated area — and there’s a 1 percent chance of such an asteroid hitting the earth this century. Talk about a terrorist threat! And right now we’re as clueless about how to deflect such a rock as we are about how to find a bomb in an airline passenger’s underpants.

I will forever be haunted by the vision of those people hanging out the shattered portals of the upper floors of [the World Trade Center]. It is a beautiful windswept day, with an achingly blue sky. There are dozens of them waving white towels, flags of hope (the day was so lovely), waving, waiting for help. Those white flags, for some sad reason, reminded me of the scraps of paper, hastily scrawled notes that, they tell us, were found along the tracks where the trains bound for Treblinka, Buchenwald, and Auschwitz had passed in the night. . . .

Our reality has been profoundly changed by it. We will never see clouds of debris, people in high windows, and bearded men with Middle Eastern accents the same way again.

Jets will no longer be simply a rather crowded box to get us from here to there quickly. You and I will never enter the elevators of what we once called “skyscrapers” without a momentary pause, a twitch of fear.

This new fear of ours goes well beyond structures. Subways? We all remember the sarin gas attacks in Tokyo. Water? They are saying it’s possible to drop something in the water, something invisible, undetectable, that will poison us. The air? How about anthrax or botulism? Food? One of the nineteen hijackers was studying crop-dusting, to seed our fields with new and awful chemicals.

Can there be any end to our fears now?

Unless you’re from one of the targeted immigrant communities [in the U.S. after 9/11], you have no idea what’s going on there. Streets are empty. Stores and businesses are closed because people have been detained or deported, or their customers have disappeared, or residents are just afraid to go out. These used to be bustling, vibrant neighborhoods, but if you don’t live there or have reason to visit, you would never know the impact homeland-security policies have had. In the two months following September 11, more than twelve hundred Muslim, Arab, and South Asian men were rounded up for indefinite detention. Then, starting in September 2002, there was “special registration,” where noncitizen males from Islamic countries were required to register with the INS.

In the early sixties, my family lived in Alabama, the “Heart of Dixie,” or so the state motto says. I was taught to take pride in the fact that our city did not fall to the Union Army during the Civil War: General Lee may have surrendered, but we never did.

One evening my father came home from work at the meatpacking plant and announced that there was to be a cross-burning in our neighborhood that night. A white man from out of town had brought his black wife to live here, and the Ku Klux Klan would not stand for such an affront.

After we’d finished our supper, Dad took down his shotgun and gave it a cleaning. Mom pitched a fit. She didn’t think Dad should be involved with this mess; after all, he was a married man with a family. Dad left her crying on the porch as he climbed in his old Dodge pickup and drove off.

Dad came home the next morning after the sun had risen, tired and bleary-eyed. Mom clucked around him like a hen over a lost chick, but pride sparkled in her hazel eyes.

There had been no cross-burning the night before, because my father had spent a sleepless night sitting on a porch and waiting, shotgun across his lap, beside a man he didn’t know, to face a flock of cowards wearing sheets whom he knew far too well.

I went to the Jordan Downs housing project in Watts right after the Rodney King police verdict had sparked riots in 1992. There was still smoke rising from burning buildings. I was going as a representative of the NAACP Legal Defense Fund, where I’d been for maybe five months. I went straight from court that day, and I waltzed into the Grape Street gym looking like a black Republican, wearing more pearls than Barbara Bush. [Laughter.] And a group of women looked at me as if to say, What are you doing here? I said I wanted to help. They told me to go help their men, and they directed me to a trailer. Two rival gangs were inside brokering a truce, but I didn’t know that, so I just went and stupidly knocked on the door: pearls, pumps, business suit, and all. I said to the man who answered, “I’m Connie Rice from the NAACP Legal Defense Fund, and I’m here to help you.” Inside I could see black men with red bandannas and blue bandannas seated around a table — red on one side, blue on the other. The Crips and the Bloods. I probably looked like an extraterrestrial to them. They slammed the door in my face.

“Both Sides of the Street,” Connie Rice, interviewed by Diane Lefer, April 2008

Peace is active, not passive. You can’t sit back and wait for peace to come to you. You must work for it. You must shake off your apathy and demand it. This is not always easy in a culture of war, such as we have in the U.S., but it is necessary.

It is clear that war makes great demands on its participants. We need to think of peace in the same way. Peace is not the absence of war or the space between wars; it is a goal to be achieved by actively demanding that the world’s governments find nonviolent means of settling disputes.

My first job after college was with an environmental-activist organization. We went door-to-door armed with an environmental “scorecard” of the various congressional, senate, and assembly members, registering people to vote and inviting them to join our organization. Our staff members were mostly white, middle-class folks like myself. There was much talk about diversifying, but our attempts were feeble and unproductive.

One night a young black man joined us. As was usual, he was dropped off in a neighborhood with a seasoned canvasser to learn the ropes. At the end of the night I picked them up and found his trainer highly agitated and the young man sitting quietly on the curb. The trainer pulled me aside and told me door after door had been shut in their faces, and someone had called the police to report “suspicious persons” in the neighborhood — something that had never happened to him before.

The young man on the curb was shaken. I went to talk with him, but I had trouble finding the right words. How do you apologize for or explain prejudice and ignorance? His voice broke as he told me how much he wanted to work with us, but that there was no way he could handle that kind of rejection. I said something like, Not all communities are like this, but in my heart I knew this neighborhood was typical. Seeing the slight tremble in his chin as he struggled to hold on to his composure, realizing he was unable to meet my eyes, I felt for a moment what it must be like to wear his shoes — and it hurt.

Early one morning several teachers and staffers at a Connecticut grade school were in a meeting. The meeting had been underway for about five minutes when they heard a chilling sound in the hallway. (We heard pop-pop-pop, said one of the staffers later.)

Most of them dove under the table. That is the reasonable thing to do, what they were trained to do, and that is what they did.

But two of the staffers jumped, or leapt, or lunged out of their chairs and ran toward the sound of bullets. Which word you use depends on which news account of that morning you read, but the words all point in the same direction — toward the bullets.

One of the staffers was the principal. Her name was Dawn. She had two daughters. Her husband had proposed to her five times before she’d finally said yes, and they had been married for ten years. They had a vacation house on a lake. She liked to get down on her knees to paint with the littlest kids in her school.

The other staffer was a school psychologist named Mary. She had two daughters. She was a football fan. She had been married for more than thirty years. She and her husband had a cabin on a lake. She loved to go to the theater. She was due to retire in one year. She liked to get down on her knees to work in her garden. . . .

Dawn and Mary jumped, or leapt, or lunged toward the sound of bullets. Every fiber of their bodies — bodies descended from millions of years of bodies that had leapt away from danger — must have wanted to dive under the table. . . .

But they leapt for the door, and Dawn said, Lock the door after us, and they lunged right at the boy with the rifle. 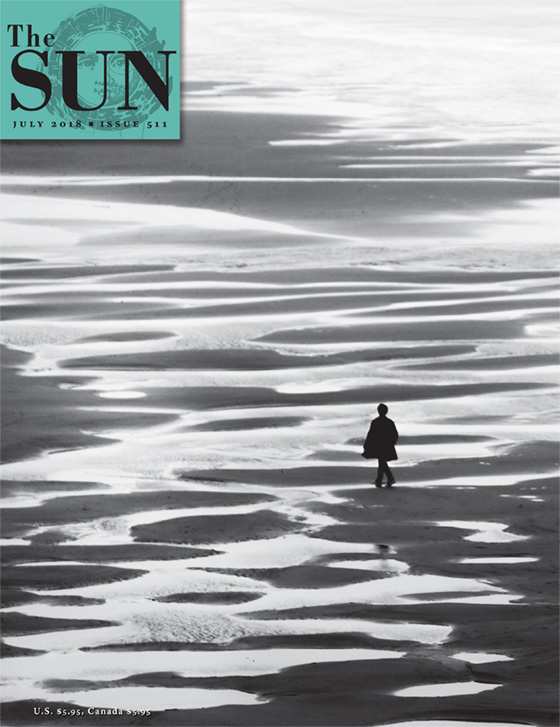 By Krista Bremer
The Dog-Eared Page

By Vanessa Hua
The Sun Interview

Sylvia Earle On Why We Need To Protect The Oceans